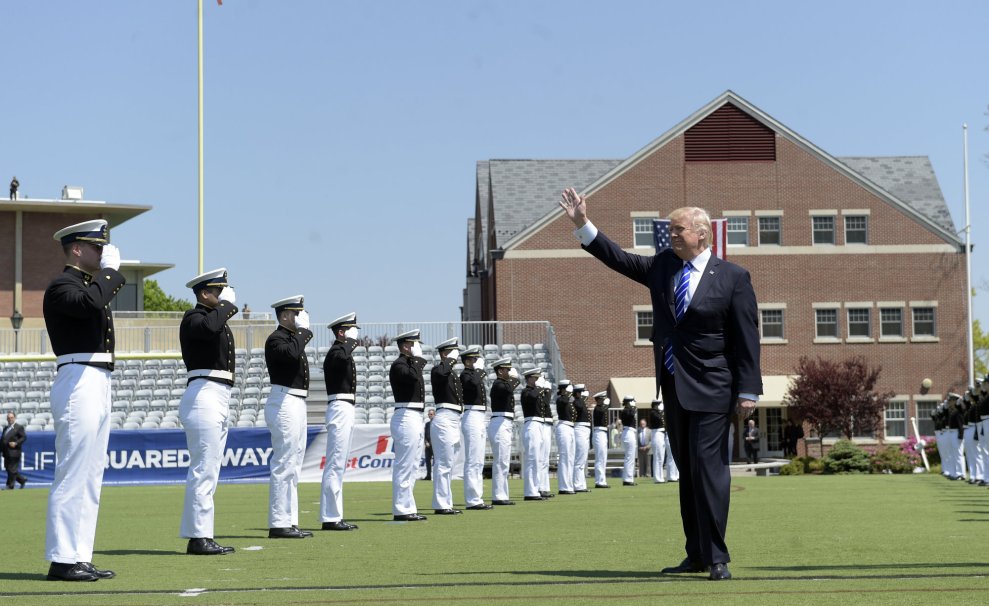 President Donald Trump on Wednesday used a commencement address at the Coast Guard Academy to declare that no other politician in history has ever been “treated worse or more unfairly by the media” than he has. The speech was Trump’s first public appearance since a bombshell New York Times story revealed that the president had allegedly asked then-FBI director James Comey to drop the investigation into former National Security Advisor Michael Flynn. (The White House has denied the allegations.)

During the ceremony, Trump compared his relationship with the media to the challenges that lie ahead for the Coast Guard graduates.

“Over the course of your life, you will find that things are not always fair,” the president said. “You will find that things happen to you that you do not deserve and that are not always warranted, but you have to put your head down and fight, fight, fight. Never ever ever give up. Things will work out just fine. Look at the way I’ve been treated lately—especially by the media. No politician in history—and I say this with great surety—has been treated worse or more unfairly.”

“You can’t let them get you down,” Trump continued. “You can’t let the critics and the naysayers get in the way of your dreams.” He added: “I guess that’s why we won. Adversity makes you stronger.”

Later in the speech, Trump said that he “didn’t get elected to serve the Washington media or special interests” and promised the Coast Guard graduates that he would never stop fighting for them. Interestingly, while the president’s budget would increase defense spending by $54 billion, he actually proposed slashing the Coast Guard’s budget by $1.3 billion—a 12-percent cut.