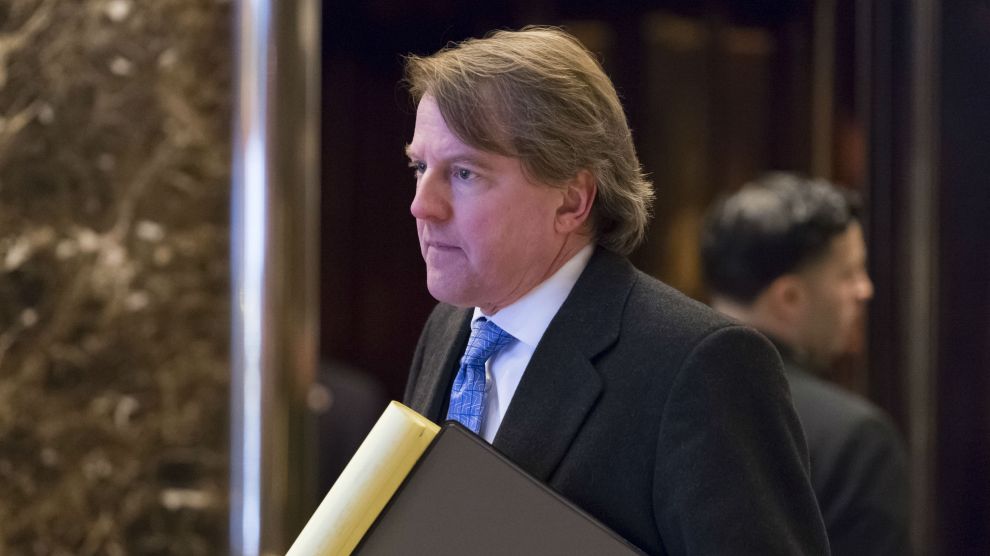 After a brief spell away from the headlines, White House Counsel Donald McGahn II, President Donald Trump’s top lawyer, finds himself back in the spotlight—and not under the best of circumstances.

Sally Yates, the longtime Justice Department official whom Trump fired as acting attorney general in January, testified Monday before a Senate subcommittee about her interactions with McGahn and others in the Trump administration concerning former National Security Adviser Michael Flynn. It was Yates who first alerted the White House in January that Flynn had lied to administration officials, including Vice President Mike Pence, about his communications with Russian Ambassador Sergey Kislyak, and who warned that Flynn might be vulnerable to blackmail by the Russians. In Yates’ telling, McGahn’s responses to her warnings were, at times, bizarre.

Yates first met with McGahn on January 26, relaying to him the basic facts of what she knew. The following day, McGahn asked Yates to come back for another meeting. “One of the questions that Mr. McGahn asked me when I went back over the second day,” Yates told the senators, “was essentially, why does it matter to [the Justice Department] if one White House official lies to another White House official?”

Huh? A better question would be: Why wouldn’t it matter? As Jack Goldsmith, a former Bush administration lawyer and vocal critic of McGahn, wrote at Lawfare:

The first question is puzzling on many levels. Why would the White House Counsel ask DOJ whether it mattered if the National Security Advisor lied to the Vice-President and others? Did he not understand or care about what Yates had told him the day before—that DOJ thought Flynn had badly misled the American people and was compromised by the Russians? (Yates re-emphasized in response to the question that DOJ’s concerns involved “a whole lot more” than mere lies). Why did he think this was a serious question to ask in these circumstances? Was he trying to get a clearer official answer for his superiors? Why? It’s really hard to fathom why he asked this.

Another question was why it took so long for Flynn to be fired. Yates had presented evidence that Flynn had lied to his superiors, and yet somehow he remained on the job for another 18 days. He even joined in on a call between Trump and Russian President Vladimir Putin in the Oval Office. If McGahn had made a more forceful case for Flynn’s departure, would Flynn have been let go much sooner?

As I noted in my recent profile of McGahn, there were lingering questions about McGahn’s handling of the Flynn situation well before Yates’ testimony:

Still more questions were raised about McGahn’s judgment and the White House’s vetting process when the Washington Post reported that national security adviser Michael Flynn had discussed sanctions with the Russian ambassador to the United States, and that the Justice Department had briefed McGahn about it during the transition. The next day, White House press secretary Sean Spicer told reporters that McGahn had conducted his own review and “determined that there is not a legal issue.”

Former White House lawyers were stunned. “I wouldn’t have done that,” a former Obama White House counsel told me. “I don’t know what the FBI knows. I don’t know who they’re interviewing.” Goldsmith, the former senior Justice Department lawyer, questioned how rigorous McGahn’s review could have been. The White House counsels he knew, Goldsmith wrote, “were all tough-minded but extremely prudent in dealing with legal jeopardy related to the White House, especially if that jeopardy touched someone as close to the President as his National Security Advisor.” He added, “It is far from clear that the current White House counsel has acted in this fashion.” And McGahn’s judgment was once again called into question when news reports revealed that Flynn had worked as a foreign agent on behalf of Turkish interests at the same time he served as Trump’s national security adviser—a troubling conflict that the incoming White House counsel was briefed on but declined to address.

The job of the White House counsel is, above all, to give the president good advice and keep him out of trouble. That’s no easy task with a client like Trump. Yet from what we know so far about the Flynn controversy, it doesn’t always look like McGahn has steered his client in the right direction.