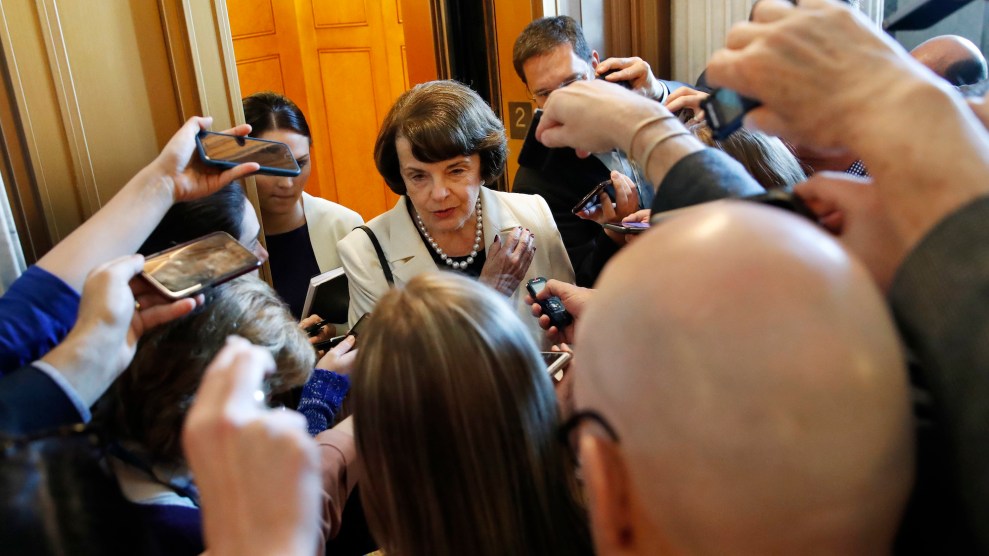 Emerging from a closed-door strategy meeting following President Donald Trump’s unexpected firing of FBI Director James Comey, Democratic senators on Wednesday appeared to be working out their next steps to address what some of them described as a constitutional crisis.

Several senators said they were losing faith in the ability of political appointees at the Justice Department to oversee the FBI’s investigation into Russian interference in the presidential election. Attorney General Jeff Sessions recused himself from the investigation in March after he had been caught lying to the Senate Judiciary Committee about his own contacts with Russian officials. That meant Deputy Attorney General Rod Rosenstein would oversee the Russia probe. But Democrats are now questioning Rosenstein’s independence after he drafted a three-page memo criticizing Comey’s handling of the investigation of Hillary Clinton’s emails that Trump used as the rationale for dumping Comey.

Following the meeting, several Senate Democrats called for a special counsel to be appointed by a career Justice Department official—not Rosenstein, a political appointee—to take over the Russia inquiry. “I don’t have faith in the political appointees, so it should be appointed by the senior-most career lawyer at the Justice Department,” Sen. Mark Warner (D-Va.), the top Democrat on the Senate Intelligence Committee, told reporters. Sen. Bob Casey (D-Pa.) agreed, saying, “The best way to do it is to have the deputy attorney general delegate to the top career person the decision to appoint a special counsel.” Asked if that means he had no confidence in Rosenstein, Casey responded, “I think there are a lot of questions about that now.” (Senate Majority Leader Mitch McConnell and other Republican leaders have steadfastly opposed handing this probe to a special prosecutor or setting up an independent commission.)

Sen. Dianne Feinstein (D-Calif.), the top Democrat on the Senate Judiciary Committee, noted that she recently voted to confirm Rosenstein but now had doubts. “This issue should be handled by the most senior career official at [the Justice Department],” she said. Feinstein criticized Rosenstein’s memo on Comey, saying it was based more on quotes from others than on his own reading of the law. “If you read his paper, it’s not a legal paper,” she said. “It’s quotes assembled from other people…so as I read the recommendation, it was not legal, it was not done on any legal theory, any legal law. It was done on what this person and what another person said.”

Democrats are in the minority, and when asked what they can do to force the selection of a special counsel and more generally protect the investigation, they mostly demurred. But their message seems to be clear: They are describing the firing in the most dire terms as a looming constitutional crisis with American democracy at stake. And they expressed tentative hope that their GOP colleagues might join their call for independent oversight.

Some Democrats want to give Republicans time to think the situation over. “This is 12 hours old,” Sen. Chris Murphy (D-Conn.) told the Washington Post after the meeting. “I think we have to give a little time for Republicans to have a conversation.” Though Republicans have generally been united, some have expressed concerns since Comey’s firing, including Sen. John McCain (R-Ariz.), who has repeatedly called for a special congressional committee to investigate Russian influence in the election and renewed those calls. Sen. Richard Burr (R-N.C.), the chairman of the Senate Intelligence Committee, said Comey’s firing could delay his committee’s investigation. Sens. Jeff Flake (R-Ariz.) and Bob Corker (R-Tenn.) have also expressed concern about the firing.

“Some of them are at least placid on the outside,” Sen. Dick Durbin (D-Ill.) said of his GOP colleagues, “but others have expressed a real concern as to what this means.” Sen. Richard Blumenthal (D-Conn.) added, “Certainly there is a lot of disquiet and doubt about this looming constitutional crisis that we face… I have spoken to Republicans and they are certainly thinking very seriously about the constitutional crisis that we face right now.”

Durbin agreed that the Comey firing points toward a constitutional crisis. “I think it’s constitutional”—rather than political—”because it raises a question about the separation of powers and also about whether a president can be held accountable under the law, a president and his team,” he said.