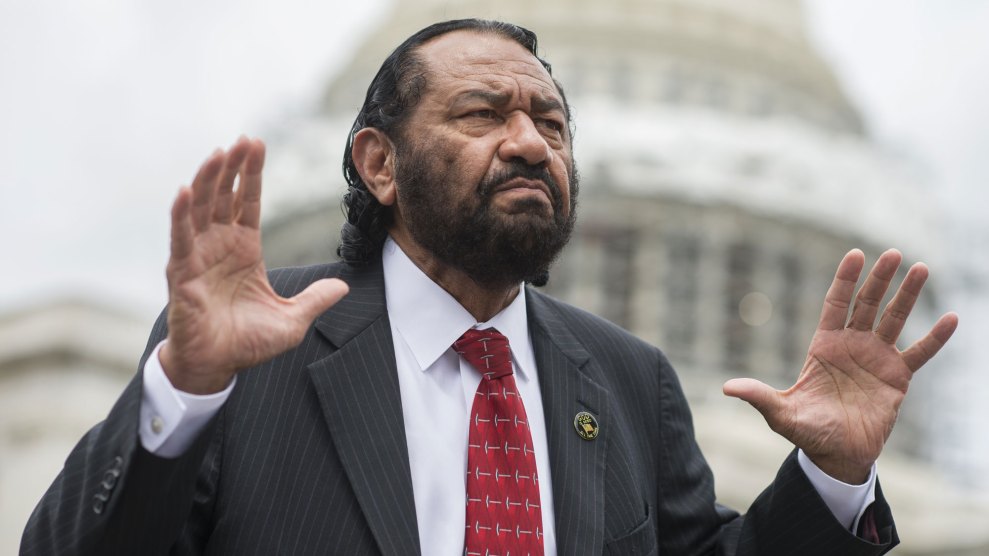 Before Rep. Al Green (D-Texas) began his town hall Saturday morning, he instructed his aides to play a tape. It was, he explained, a voicemail he had received earlier in the week, shortly after he had delivered a speech on the House floor to become the first member of Congress to call for President Donald Trump to be impeached.

“Hey, Al Green, I’ve got an impeachment for ya—it’s gonna be yours,” said a man’s voice. “Actually we’re gonna give you a short trial before we hang your nigger ass.”

A murmur went up in the audience of 80 or so Houston-area constituents who had packed into a church hall in the city’s southwest corner. Green played another voicemail, which warned, “try it, and we’ll rinse out you fucking niggers, you’ll be hanging from a tree.”

When it was over, Green got to his point. “Friends, I want to assure you that no amounts of threats or intimidation will stop what I have started, I promise you—we are going to continue with this,” he said. “We are gonna move forward, we will not turn around.”

Green, a seven-term congressman and member of the Congressional Black Caucus, made his call for impeachment after Trump tweeted warning former FBI director James Comey not to leak details of their conversations with the press. Green told the audience he believes that Trump’s actions amounted to an admission of obstruction of justice, and the tweet constituted intimidation. It is imperative, he said, that the House move to indict Trump; nothing less than the rule of law is at stake.

A nine-year-old girl asked: “Why does it take so long to impeach Trump?”

Those who asked questions largely agreed with Green’s argument, but constituents seemed uncertain about the future. One man wondered if it was worth going through the impeachment process if the result was President Mike Pence. Another asked about impeaching Pence, too. A woman in the back wanted to know if there was any possibility of the president’s cabinet declaring him unfit. Unsurprisingly, given the president’s low approval in the district (just 18 percent of voters in the district voted for Green’s Republican opponent last fall), only one questioner voiced any real opposition to what Green had done, asking why he had said nothing about “the lawlessness of the [Obama] administration.”

Green himself suggested the process might plod along from here. He hadn’t introduced an official impeachment resolution yet and was planning more town halls on the subject. “I haven’t asked leadership for a response,” he told me, insisting that impeachment needed to come “from the bottom up, not the top down.” By the same token, no one in in the leadership had told him to pipe down, he said, although he allowed that there were “surely members who were thinking it.”

When a nine-year-old girl asked “why does it take so long to impeach Trump?” Green said that it “may never happen”—but it was worth giving the system time to function as it should. He has done a flurry of interviews over the last few days (there were NBC News cameras in the back of the room while he spoke) but is treading lightly when it comes to his fellow colleagues. Green told me he was not planning to lobby fellow members to get behind an impeachment measure—”people have to be guided by their conscience.” (He did hope, though, that they would listen to public opinion—at the event he asked residents to go to ImpeachDonaldTrumpNow.org* to register their support.)

For now the road to impeachment is lonely, and perhaps very long. “I am a voice in the wilderness,” he said, “but history will vindicate me.”

Correction: This article originally misidentified the website Green was referring to.