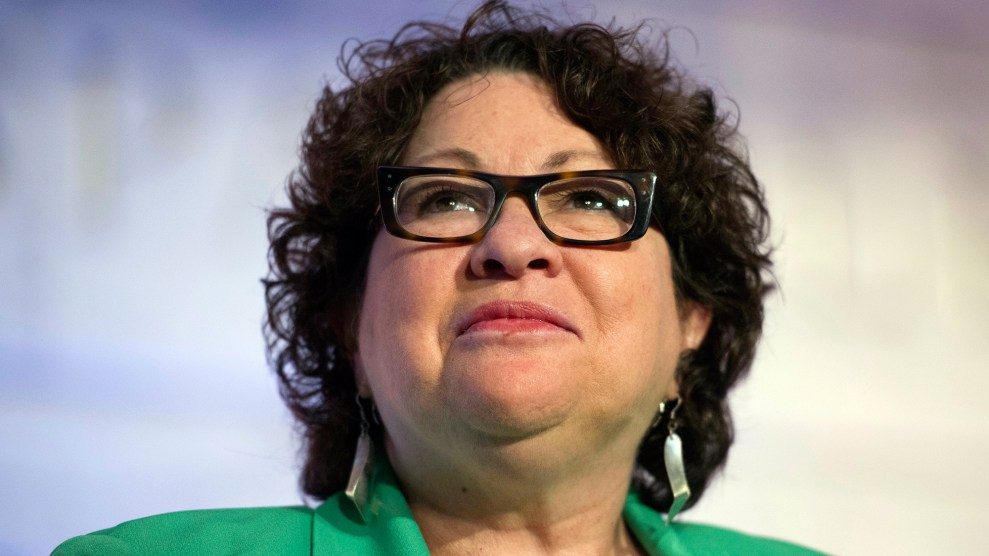 The Supreme Court has a “disturbing trend” of siding with officers over their alleged victims in cases involving the use of force by police. That’s according to a stinging dissent issued on Monday by Justice Sonia Sotomayor, after the full court voted to let stand the dismissal of a lawsuit against a Houston cop who shot a man in the back during a traffic stop. The court, Sotomayor wrote, has reliably reversed lower-court rulings that favored the plaintiff in such cases, “but we rarely intervene where courts wrongly afford officers the benefit” of the doubt. Justice Ruth Bader-Ginsburg joined Sotomayor’s dissent.

Officer Thompson claims he fired only after Salazar-Limon reached for his own waistband.

One night in October 2010, Ricardo Salazar-Limon and his friends were driving on a highway outside of Houston when Houston Police Officer Chris Thompson pulled him over. After running the driver’s license and registration and finding nothing amiss, Thomson asked Salazar-Limon to step out of his truck—apparently to conduct a Breathalyzer test. Thompson then tried to handcuff Salazar-Limon, but the driver resisted and began walking back to his truck with his back to Thompson. The officer then drew his gun and ordered him to stop. Salazar-Limon says Thompson shot him within seconds of that order. Thompson claims he fired only after Salazar-Limon reached for his waistband—as if for a weapon—and turned toward him. No weapon was found.

Salazar-Limon sustained crippling injuries. In 2011, he sued Thompson and the Houston police for violating his civil rights. But a federal judge dismissed the suit, ruling that Thompson had qualified immunity because he’d shot Salazar-Limon in the course of his lawful duties. Salazar-Limon never explicitly denied reaching for his waistband during his deposition, nor, the judge wrote, did he offer evidence that he hadn’t—so the only conclusion a reasonable jury could reach was that he had. Thompson thus could have felt threatened and shot him because of it. A federal appeals court affirmed the ruling.

Salazar-Limon appealed to the Supreme Court, which on Monday decided not to hear the case. That was the wrong move, argued Sotomayor. A dismissal should only be granted, she wrote, when the facts of an incident are not in dispute. Thompson claimed the shooting was provoked. Salazar-Limon said it was not. The lower-court judge gave unfair privilege to the officer’s account, Sotomayor said. It was a jury’s job—not a district court judge’s—to determine whose story was more plausible. A juror, she wrote, could easily ask why Salazar-Limon would have reached for his waistband if he didn’t have a weapon. (In a footnote, she cited “the increasing frequency of incidents in which unarmed men allegedly reach for empty waistbands when facing law enforcement officers.”)

Improperly dismissing lawsuits against cops who may have acted unlawfully “imposes no less harm” than trying those who haven’t broken the law.

Writing for the majority, Justice Samuel Alito said the court rarely reviews cases “where the thrust of the claim is that a lower court simply erred in applying a settled rule of law to the facts of a particular case”—as opposed to cases in which the court is asked to interpret the law itself. But Sotomayor cited five recent cases in which the court intervened after a lower court ordered an offer to stand trial based on the facts of the case. Improperly dismissing lawsuits against officers who may have acted unlawfully “imposes no less harm” than trying officers who haven’t broken the law, she wrote.

The high court’s decision could encourage federal judges to dismiss civil lawsuits against police officers, says Joanna Schwartz, a professor at the University of California-Los Angeles who studies litigation against police. The ruling could also discourage attorneys from bringing such lawsuits, further limiting the options for redress against police abuses—as prosecutors rarely bring criminal cases and the Department of Justice under Attorney General Jeff Sessions may have little interest in doing so. “Lawyers are not making very much money off these cases. They bring these cases because they believe in them,” Schwartz told me. “As it becomes increasingly more difficult to win anything, it’s going to be even harder for lawyers to make the decision to represent these plaintiffs.”

Sotomayor’s dissent on Monday was her second recent one related to police tactics. Last summer, she cited author James Baldwin and The Atlantic writer Ta-Nehisi Coates while slamming a Supreme Court ruling involving what she deemed an illegal search and seizure: “The Court today holds that the discovery of a warrant for an unpaid parking ticket will forgive a police officer’s violation of your Fourth Amendment rights,” she wrote. “This case allows the police to stop you on the street, demand your identification, and check it for outstanding traffic warrants—even if you are doing nothing wrong.”