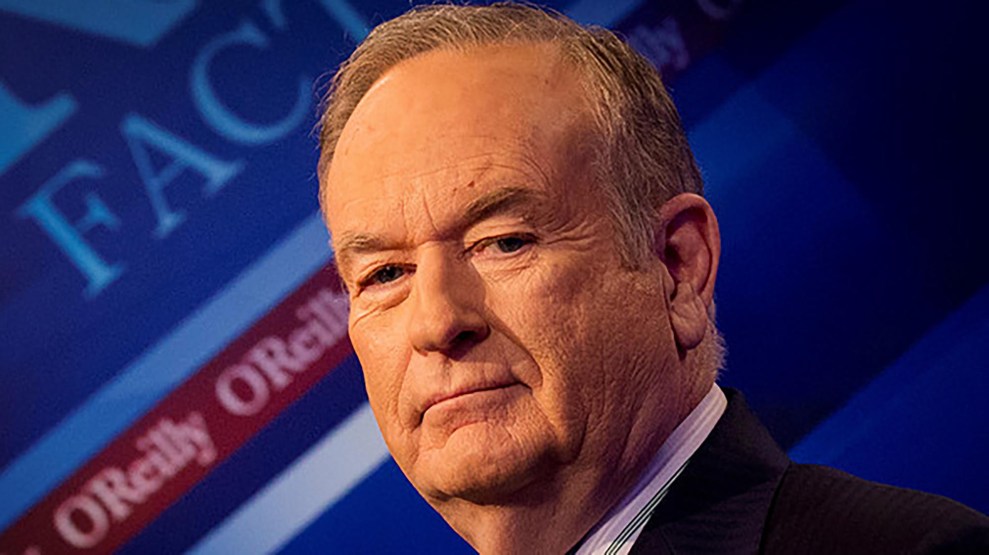 For years, it was clear that O’Reilly was a lying lout who exploited his position, power, and profits-generating status at the network to harass women, bully critics, and hurl a variety of false accusations. Yet Rupert Murdoch and Roger Ailes (until last July, when he was forced out as CEO of the network as a result of his own sexual harassment conduct) allowed O’Reilly to run wild and free. As the king of the hill at Fox News, O’Reilly survived numerous scandals that would have knocked out hosts at other networks. The reason was obvious: With his top-rated show, he brought piles of cash into the network. His personal behavior at the workplace didn’t matter. Nor did his penchant for public self-aggrandizing prevarication. Nor did his cavalier use of violent rhetoric, including, on at least one occasion, a death threat of sorts. (More on that later.)

O’Reilly’s ugly private conduct first drew public attention in 2004, when the Fox News star host was accused of harassment—and bizarre behavior—in a lawsuit filed by Andrea Mackris, an associate producer who worked with him at the network. Her case appeared to be based on secret recordings she had made of conversations with O’Reilly, and her filing was full of direct quotes from him. He supposedly spoke to her about vibrators, masturbation, and his penis, trying to engage her in phone sex, and brought himself to climax during these calls. Mackris’ initial legal complaint included a long passage in which O’Reilly fantasized aloud about taking her to the Caribbean, where he would “quickly” get two glasses of wine into her and then steer her into a shower and rub her “pussy” with “the falafel thing.” (He meant a loofah.)

The Mackris suit settled within two weeks, under confidential terms, with Mackris reportedly being paid $9 million. And thus was the pattern established. Earlier this month, the New York Times reported that in the subsequent years, O’Reilly “faced a series of allegations of sexual harassment or other inappropriate behavior” and that four other women had received payouts from either him or Fox News. (Reportedly, the Justice Department has been investigating Fox News for violating securities law in relation to these payments.) O’Reilly also was accused of domestic abuse in 2014 during a custody battle.

Throughout all of this, Fox News was O’Reilly’s enabler. Murdoch, Ailes, and others also protected O’Reilly when he lied and threatened anyone who questioned his primacy (or integrity). And I have a personal stake in this part of the O’Reilly saga, because once I was the target of his violent rhetoric.

Two years ago, Daniel Schulman and I reported that O’Reilly had repeatedly mischaracterized his limited wartime reporting experience. Over the years, he had said he had witnessed combat while serving as a war correspondent for CBS News during the 1982 Falklands war between Argentina and the United Kingdom. He had also claimed that in this “war zone in Argentina, in the Falklands,” his cameraman had been injured and O’Reilly had saved the man. None of this was true. Numerous colleagues of O’Reilly noted that no American reporters reached the Falkland Islands during the fighting and that the US correspondents covered the war from Buenos Aries, about 1,200 miles away. The cameraman said no such incident had happened. O’Reilly, like other American journalists there, had never been in the war zone.

O’Reilly also had bragged in the past that while in Buenos Aires, he had covered a riot at the war’s end, which he characterized as a combat situation, with troops gunning down and slaughtering demonstrators. News reports from the time and eyewitness accounts noted there had been no killing. And O’Reilly’s own reports from the time contradicted his boastful account. There was no massacre. Schulman and I also reported that O’Reilly had exaggerated his account of an assignment covering the civil war in El Salvador in the early 1980s.

Our story was followed by other media reports chronicling instances when O’Reilly had fibbed about his derring-do. The Guardian noted that six of O’Reilly’s colleagues from Inside Edition disputed his account of having been attacked by protesters while he reported on the Los Angeles riots in 1992. The Washington Post questioned a passage in an O’Reilly book in which he asserted he had “seen” Irish terrorists “kill and maim their fellow citizens in Belfast with bombs.” O’Reilly’s response: He saw photos of bombings. Media Matters, a liberal advocacy group, caught O’Reilly in a similar lie. He had claimed he had seen nuns gunned down in El Salvador. But nope—just photos. And CNN blew apart another boastful O’Reilly story: He had been present when a mysterious witness in the John Kennedy assassination case committed suicide.

He called me a “liar,” “dumb,” a “left-wing assassin,” and a “despicable guttersnipe.”

This was a boatload of credibility-destroying stories. Fox News, though, stood by their man. And it did so as he attempted to lie and bully his way through this series of imbroglios—with me as his No. 1 target. O’Reilly refused to acknowledge the contradictions between his tall (and false) tales and reality. Instead, he went ballistic with invective. He called me a “liar,” “dumb,” a “left-wing assassin,” and a “despicable guttersnipe.” He denounced Mother Jones as “the bottom rung of journalism in America.” And he got violent and said that I deserve “to be in the kill zone.”

It was no shocker that Fox News let O’Reilly get away with this fusillade. But it was a bit unsettling that the fair-and-balanced network did not compel O’Reilly to apologize for and retract the “kill zone” remark. After all, who knows how an unhinged O’Reilly fan might take such a comment. O’Reilly had spent years referring to Dr. George Tiller, a Kansas physician who provided abortions, as “Tiller the Baby Killer.” In 2009, Tiller was shot dead while serving as an usher in his church by an anti-abortion extremist.

Fox News just didn’t care that O’Reilly was engaging in reckless rhetoric or that he had been caught in multiple lies. There was no internal investigation. (At NBC News, Brian Williams was investigated and lost his anchor’s chair for having told false war stories.) There was no punishment. Journalistic principles, the rules of polite society—they didn’t apply. You don’t kill the cash cow. And while O’Reilly faced criticism for being a serial fabricator, his ratings improved. His audience rallied around him, as he claimed he was under unfair assault by the liberal media for having the guts to tell the truth. O’Reilly used all these stories as proof he was a courageous no-spin journalist, and folks within his echo chamber lapped it up. (A few Fox News journalists privately congratulated me on our stories, often with such comments as, “If you only knew.” The brass saw it differently.)

Why would Fox News intervene? Now even more O’Reilly bucks were pouring in. Yet with Ailes’ recent downfall and more revelations of O’Reilly’s misconduct, the network finally reached the conclusion that their pugnacious host had to be de-Factored. But keep this in mind: None of the recent yucky news about O’Reilly was a secret to the Murdochs and other execs. Since at least 2004, they had covered up for and defended their No. 1 bloviator. The issue at this time is not one man’s wrongdoing. It reaches beyond a single lewd and pompous egotist. The entire Fox News regime—which seeks to boost corporate profits by appealing to an audience supposedly in favor of conservative family values—remains tainted.

O’Reilly may be gone. But that taint remains. And the guttersnipes who dared to report on O’Reilly’s misdeeds and mis-facts know that O’Reilly was for too long the rule, not the exception, at Fox News.