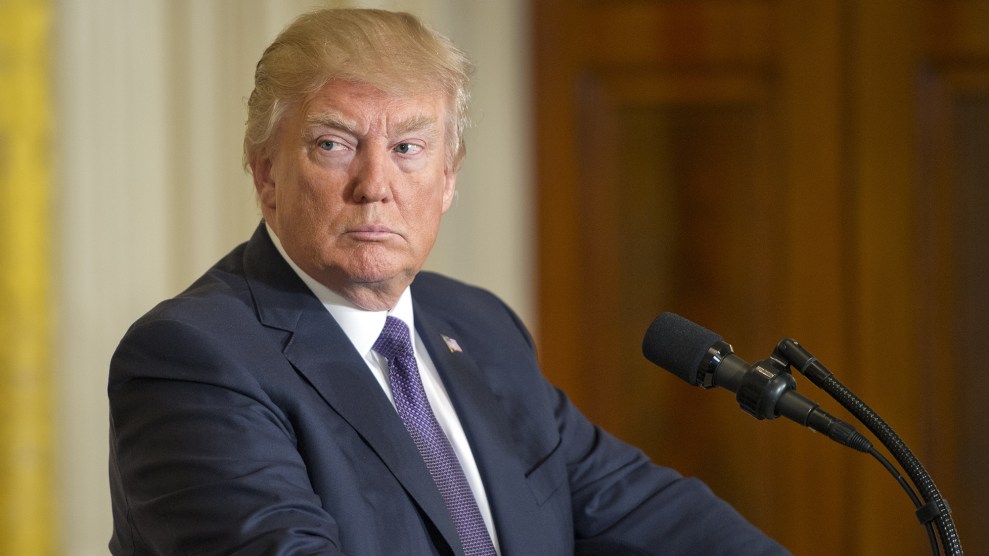 President Donald Trump is now threatening to wipe out health insurance for millions of people in order to make a political statement. In an interview with the Wall Street Journal Wednesday, Trump suggested that unless Democrats agree to his plans to dismantle Obamacare, he might use his executive authority to intentionally trigger a death spiral for the individual insurance markets.

Specifically, Trump threatened to stop making payments to insurance companies to reimburse them for subsidies that help offset the costs of deductibles and copayments for low-income people. Those subsidies are mandated by Obamacare; if the feds stopped reimbursing insurers for this expense, they would likely abandon the individual markets and leave millions without coverage.

“Obamacare is dead next month if it doesn’t get that money.”

The president seemed to acknowledge in the interview that halting the reimbursements would likely result in the health care markets collapsing, but he said he might go through with it in order to extract concessions from Democrats. “Obamacare is dead next month if it doesn’t get that money,” Trump told the paper. “I haven’t made my viewpoint clear yet. I don’t want people to get hurt…What I think should happen and will happen is the Democrats will start calling me and negotiating.”

Obamacare includes a host of mechanisms to make buying insurance easier and more affordable for people who don’t receive coverage through their employer and have to buy it on the individual market. The law primarily does this by offering subsidies—varying by income—to offset the costs of premiums for people who earn up to 400 percent of the poverty level. But the law was also designed to provide $7 billion per year in “cost sharing reduction” payments to insurance companies so that people below 250 percent of the poverty line would have lower deductibles and copayments.

After Trump’s inauguration, both the White House and Congress sought to stall the lawsuit, asking the courts to give them more time to figure out whether or not Obamacare will be repealed. When the GOP repeal bill failed last month, Trump was faced with a dilemma: He could order his administration to keep fighting the House’s lawsuit, or he could ditch the appeal and end the reimbursement payments. It sounds like Trump may now be leaning toward the latter. In addition to his Journal interview, Trump reportedly has become active behind the scenes, as well. According to Politico, the president called Health and Human Services Secretary Tom Price and dictated a statement that he wanted the agency to release on the issue.

As Trump himself said, ending the program would be a disaster for Obamacare. It would cause insurance companies to flee the individual markets (which, in some parts of the country, already suffer from a lack of insurance options). And the remaining insurance offerings would jump in price. An analysis by the Kaiser Family Foundation found that premiums for a baseline plan would jump 19 percent if cost sharing disappears.