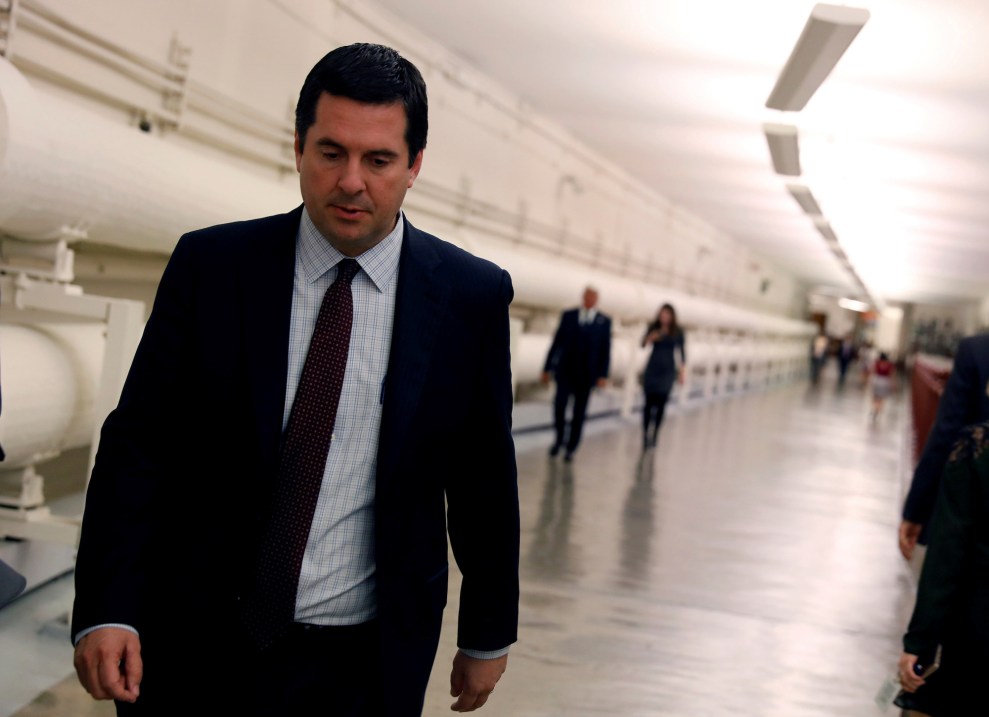 House intelligence committee chairman Rep. Devin Nunes (R-Calif.) announced Thursday he will temporarily remove himself from the committee’s investigation into Russian interference in the 2016 election. The announcement comes amid mounting questions over his ability to fairly handle the ongoing probe. Last month, he held a press conference to announce that he’d seen intelligence reports suggesting that members of Donald Trump’s transition team had been “incidentally” swept up in the course of foreign intelligence collection. He then rushed to the White House to brief the president before sharing the information he had learned with his colleagues on the committee. It later turned out that the information he had seen had been provided to him by White House officials and that he had viewed this intelligence on White House grounds—revelations that raised questions of whether he was taking part in a Trump administration effort to distract from the widening Russia controversy.

In a statement this morning, Nunes said:

Several leftwing activist groups have filed accusations against me with the Office of Congressional Ethics,” Nunes said in a statement. “The charges are entirely false and politically motivated, and are being leveled just as the American people are beginning to learn the truth about the improper unmasking of the identities of U.S. citizens and other abuses of power.

Despite the baselessness of the charges, I believe it is in the best interests of the House Intelligence Committee and the Congress for me to have Representative Mike Conaway, with assistance from Representatives Trey Gowdy and Tom Rooney, temporarily take charge of the Committee’s Russia investigation while the House Ethics Committee looks into this matter.

Rep. Adam Schiff (D-Calif.), the ranking Democrat on the House intelligence committee, praised Nunes for the decision, calling it a “fresh opportunity to move forward in the unified and nonpartisan way that an investigation of this seriousness demands.”

Schiff on Nunes: “It is in the best interest of the investigation. I think it will allow us to have a fresh start.” —via @MSNBC pic.twitter.com/t7vZcDBBZb

This is a breaking news post. We will update when more information becomes available.