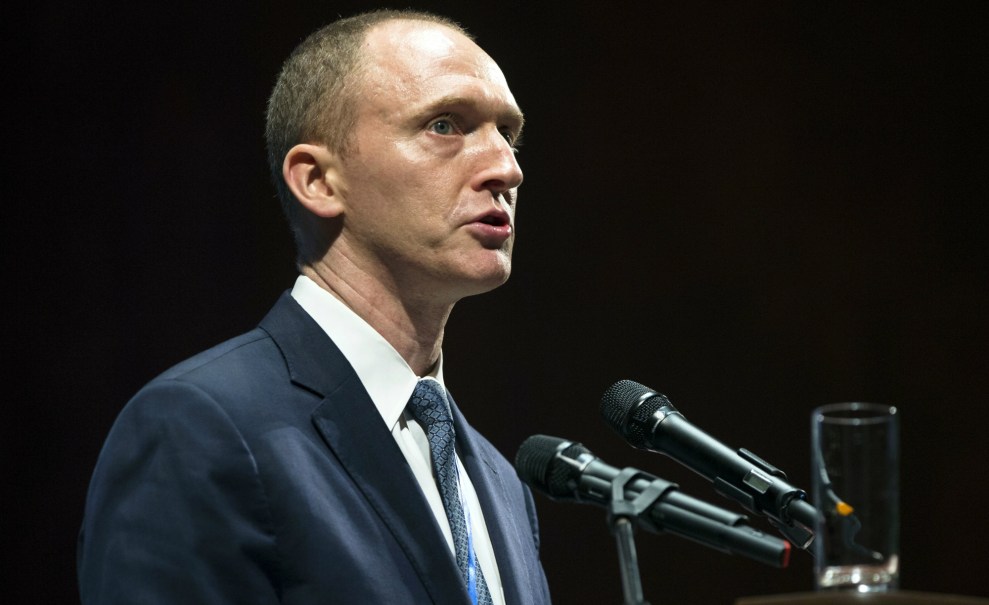 Did Carter Page, a Trump campaign adviser, speak to anyone in Russia about the United States potentially lifting sanctions imposed on Vladimir Putin’s government when he was in Moscow during the campaign last summer? Not at all, but, then again, maybe.

That’s what Page said during an interview with George Stephanopoulos on Good Morning America Thursday.

“We’ll see what comes out in this FISA transcript.”

Page’s comments came days after the Washington Post reported that the FBI had obtained a secret order from a Foreign Intelligence Surveillance Court to monitor Page’s communications last summer. To obtain that warrant, known as a FISA warrant, the FBI would have had to persuade a judge that there was probable cause to suspect that Page had been acting as an agent of the Russia government. The Post described the revelation as the “clearest evidence so far that the FBI had reason to believe during the 2016 presidential campaign that a Trump campaign adviser was in touch with Russian agents.” Page has not been accused of any crimes, and he has repeatedly denied he ever acted as an agent for any foreign power.

Page visited Russia last July—reportedly with approval from the Trump campaign—and gave a speech at the New Economic School in Moscow criticizing US policy toward Russia. He left the campaign in September amid allegations that he had privately communicated with Russian officials during the trip. Page denied those allegations. On ABC Thursday, Page acknowledged that he briefly said “hello” to one of the school’s board members, when Stephanopoulos asked whether he had met with anyone in the Russia government or connected to Russian intelligence.

Stephanopoulos also asked Page whether he had ever told any Russians in the United States or abroad that Trump “would be open to easing sanctions on Russia.”

“Absolutely not,” Page replied at first.

Stephanopoulos followed up: “Never? Not once?”

“I never offered that,” Page said again. “Nothing along those lines. Absolutely not.”

Then Page seemed to reconsider his response. “I mean—it may—topics—I don’t remember—we’ll see what comes out in this FISA transcript,” he said. “I don’t recall every single word that I ever said. But I would never make any offer or intimate anything.”

“But it sounds like from what you’re saying it’s possible that you may have discussed the easing of sanctions,” said Stephanopoulos.

“Something may have come up in a conversation,” Page responded. “I have no recollection, and there’s nothing specifically that I would have done that would have given people that impression.”

Pressed again by Stephanopoulos on whether he had discussed easing sanctions with any Russians, Page said, “Someone may have brought it up—I have no recollection. And if it was, it was not something I was offering or that someone was asking for.”

Page’s comments on ABC follow an interview he gave Wednesday to CNN’s Jake Tapper, in which Page said that during his Russia trip he spoke with students, scholars, and business people about the 2016 campaign. Page told Tapper that he had never had any “direct conversations” with anyone in Russia about the possibility of Trump ratcheting back on sanctions:

PAGE: No Russian official. I was speaking at a university, and I spoke with many scholars and students and parents that were at the graduation celebrating their kids’ achievements. Other than that, nothing.

TAPPER: I didn’t ask Russian official, I just asked any Russian because obviously, Russians, as you know in Russia, people are affiliated with private industry but they also do work with the government, et cetera.

TAPPER: So—but you did not talk to any Russian at all other than students and parents and scholars about the presidential election?

PAGE: I met a few business people, but no negotiations about anything in terms of anything related to the campaign whatsoever.

TAPPER: Well, I’m not talking about negotiations, but as long as you bring it up, I mean, have you ever conveyed to anyone in Russia that you think President Trump might have been more willing to get rid of the sanctions that were imposed against Russia after they invaded and seized Crimea, which I know are sanctions that you oppose and you think are ineffective. Did you ever talk with anyone there about maybe President Trump, if he were elected—then-candidate Trump, would be willing to get rid of the sanctions?

PAGE: Never any direct conversations such as that. I mean, look, it’s—