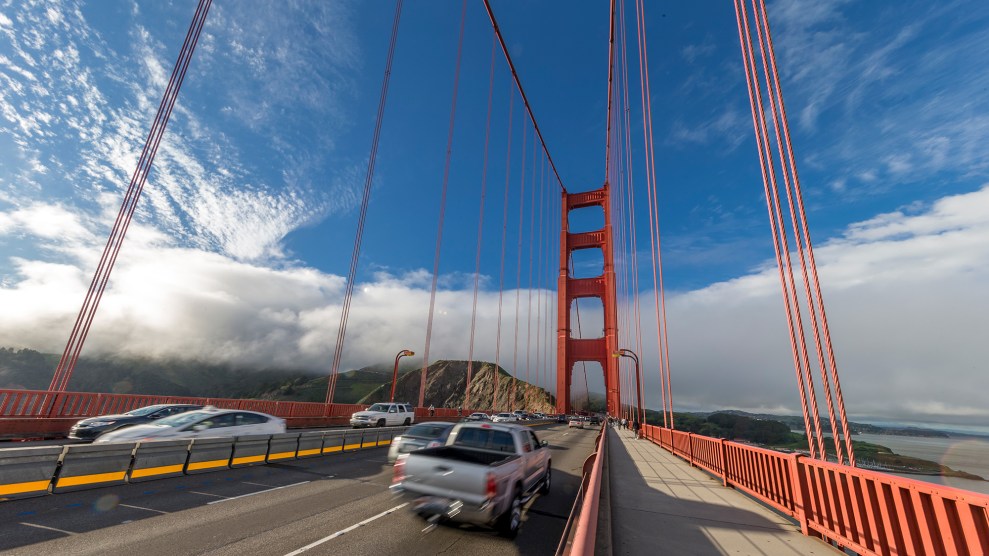 Yesterday, the California legislature passed the largest gas tax increase in state history in a move projected to raise $52 billion over 10 years to fix the state’s crumbling roads, bridges, and public transit systems. The state already has some of the highest gas taxes in the country. But the falling price of gas, increased fuel efficiency, and the popularity of hybrid and electric vehicles has recently crimped tax revenues, contributing to an estimated $135 billion backlog in road and bridge repairs. The new tax is designed to plug that gap with a 12-cent per gallon increase in the gas tax, as well as new taxes on diesel fuel, a $100 annual fee for electric cars, and higher vehicle registration fees.

California now joins 17 other states—half of them controlled by Republicans—that have enacted gas tax increases since 2013. Yet this approach remains a nonstarter for many Republicans on Capitol Hill and within the Trump administration, which are pushing a national infrastructure plan funded by granting tax credits to private investors.

“The Speaker of the House of Representatives is ideologically opposed to public investment in public infrastructure,” says Rep. Peter DeFazio (D-Ore.), the ranking member of the House Transportation and Infrastructure Committee. Like California’s plan, DeFazio’s Penny For Progress Act would use increased gas taxes to fund federal highway and transit investment. But it has yet to receive a hearing in Congress. “Anything that involves a tax or a user fee, [Speaker Paul Ryan] is against it. So that’s the roadblock here.”

Passing the California tax was a major victory for 79-year-old Gov. Jerry Brown, who has positioned the Golden State as a bulwark against the right-wing policies and legislative incompetence of the Trump administration. In a mere eight days, the veteran governor went from announcing the bill to assembling the two-thirds supermajority of lawmakers required to enact a tax increase. All of the votes except one came from Democrats, and after the vote Brown slammed Republicans for their opposition. “I appreciate being a Democrat and what the Democrats did,” he said. “There is a reason why the members of the other party have been going downhill for so many decades. That’s because they are doing nothing. We did something to fix the roads of California.”

“The Speaker of the House of Representatives is ideologically opposed to public investment in public infrastructure.”

Brown had crisscrossed the state to win over Democratic moderates from rural and suburban areas who were concerned about the tax’s impact on farmers, truckers, and commuters. Taxing drivers is a sensitive issue in sprawling California; in 2003, Democratic Gov. Gray Davis was recalled in part due to a backlash over hiking vehicle registration fees. “Now is the time—don’t blow it guys,” Brown said at a press conference Tuesday in the Inland Empire district of Democratic state Sen. Richard Roth, one of the last holdouts. When his term ends in 2018, Brown said, “I’m going off to my ranch. You’re going to be driving on these damn roads. Fix them now, or we may never get them fixed.”

Brown’s skill at legislative deal-making contrasts sharply with the progress of Trump’s proposed $1 trillion infrastructure deal, which has been tied up in Republican infighting. Speaker Ryan and a faction within the Trump administration led by billionaire leverage buyout specialist-turned-Commerce Secretary Wilbur Ross want almost all of the spending to come from tax credits given to private investors who underwrite infrastructure projects such as toll roads. Ross argues that $137 billion in tax credits over 10 years could spur $1 trillion in infrastructure investment, matching Trump’s campaign promise. But some conservative economists say the approach doesn’t hold water.

“I don’t think that is a model that is going to be viewed as successful or that you can use it for all of the infrastructure needs that the US has,” Douglas Holtz-Eakin, president of the center-right American Action Forum think tank, told the Associated Press. It would only work for projects that generate tolls or user fees, Holtz-Eaken said, and even then, the plan might reward investors for projects that would have been built anyway.

In contrast, DeFazio’s bill would raise $500 billion in infrastructure investment by issuing bonds that would be paid off by increasing federal gasoline and diesel taxes, which have lost 40 percent of their purchasing power since 1993 due to inflation. According to the Department of Transportation, the United States faces an $926 billion backlog in necessary highway, bridge, and public transit investments. DeFazio says many rank-and-file Republicans in Congress like his proposals but won’t put their names on his bill because “House Speaker Paul Ryan thinks that only the private sector should do these projects, even if it’s public infrastructure.”

Even with the new gas tax, California still needs federal infrastructure investment. “States can’t do it on their own,” DeFazio says. “California can’t raise enough money in and of itself, nor can any other state. And a substantial number of red states have raised their gas taxes in recent years and no one’s been recalled and no one’s lost their elections. Americans get it.”