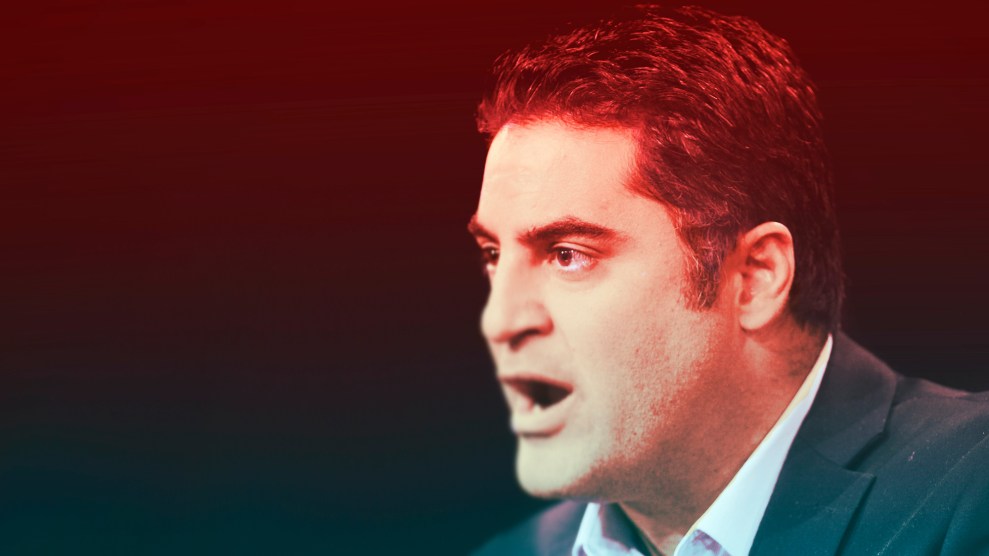 Cenk Uygur bristles at the notion that the progressive media company he co-founded more than a decade ago, the Young Turks, is becoming the Breitbart of the left—that is, a pugilistic news outlet waging an ideological war with the establishment class. If you ask him, the comparison is backward. “Andrew Breitbart, when he was on my show before he passed away, said they emulated us, not the other way around,” Uygur told me in mid-March, after finishing a panel at South by Southwest. “They get a lot of credit now because our idiot president reads them, but in terms of traffic, they’re nowhere near us.” Besides, he added, Breitbart had done it wrong. “The trick is to be honest, and that’s the part they left out.”

The comparison, though, was still on Uygur’s mind a few days later. “We have 80 million unique viewers” a month, he said on his nightly YouTube show—a figure that’s roughly double Breitbart‘s monthly readership. “Breitbart is a pimple on our ass.”

Yet in the aftermath of the 2016 election, the 46-year-old Uygur, a longtime critic of the Democratic Party’s political establishment, has ventured into an unfamiliar and uncertain place in Democratic politics. Fed up with the “sellouts” in Washington, Uygur has emerged as a leader of a coordinated progressive effort to unseat incumbent Democrats en masse in House and Senate primaries next year.

“Andrew Breitbart, when he was on my show before he passed away, said they emulated us, not the other way around,” Uygur says.

In December, Uygur, Kyle Kulinski, a Young Turks network colleague who hosts “Secular Talk,” and a pair of top Bernie Sanders campaign staffers launched Justice Democrats, a political action committee that aims to recruit and fund a slate of primary challengers under an anti-corporate, progressive banner. Justice Democrats boasts 200,000 members and has raised more than $1.5 million. In March, it formally joined forces with another branch of the Sanders diaspora, Brand New Congress, which has vowed to run more than 400 progressive House and Senate candidates in 2018.

To further this effort, Uygur is preparing to deploy his show—which appears on YouTube and the Young Turks website—as a battering ram against Democrats who don’t fall in line. He says he will offer airtime and fundraising help for progressive challengers.

The Young Turks (TYT) is the political opposite of Breitbart, Stephen Bannon’s alt-right home page. But Uygur’s platform increasingly shares one big thing in common with the combative right-wing site that unabashedly eggs on intra-Republican challenges and sells “RINO hunter” coffee mugs in its online store: a mission to make the establishment squeal.

“Let them keep thinking what they’re gonna think,” Uygur said of the Democratic Party’s consultant class. “We’re gonna rout them. It’s a whole new world. And yes, new media will drive us to totally new results. It’ll be a much more progressive future. They have no idea what’s gonna hit them.”

There is plenty of cause for skepticism. Liberals don’t have much of a track record when it comes to knocking off Democratic incumbents. Their biggest success in recent years came in 2006, when Democrat Ned Lamont, an opponent of the Iraq War, beat Sen. Joe Lieberman, a prominent hawk, in the Democratic primary. Yet Lamont went on to lose to Lieberman in the general election, when the incumbent ran on the “Connecticut for Lieberman” ticket. Uygur, though, believes the progressives’ lack of success in knocking off centrist or moderate Democrats has been partly due to mainstream media outlets depriving would-be challengers of oxygen. And that’s where he comes in.

The Young Turks started as a radio show in 2002 and eventually grew into a YouTube-based media company with 11 shows. (Uygur also hosted a MSNBC show by the same name for six months in 2011.) It is a for-profit company that received a $4 million investment three years ago from a venture capital firm headed by former Louisiana Republican Gov. Buddy Roemer. (The partnership is not as strange as it sounds; Roemer has become a leading critic of the post-Citizens United campaign finance world.)

At the same time Uygur is gearing up to do battle in Democratic primaries, he’s mounting a major expansion at TYT. Since the election, TYT has raised $1.4 million in crowd-sourced donations and hired eight new staffers and contributors. The new hires largely fit Uygur’s combative model. One new recruit is Michael Tracey, a bomb-throwing former Vice writer who recently called the media’s “bizarre new obsession with (allegedly) rising anti-semitism” a “moral panic.” Other recent hires include Shaun King, the Black Lives Matter activist and former New York Daily News columnist, and Nomiki Konst, a reporter and commentator who was chosen by the Sanders campaign to serve on the Democratic National Committee’s post-election unity commission. The Huffington Post‘s Washington bureau chief Ryan Grim signed on as a TYT commentator, as did David Sirota, a popular progressive journalist who has recently specialized in business reporting.

TYT is gleefully in-your-face, with an advocacy bent that’s atypical for a news outlet. Last month, while Konst was covering the election of the Democratic National Committee’s new chairman in Atlanta, she found herself in a Twitter skirmish with longtime Hillary Clinton adviser Neera Tanden, the president and CEO of the Center for American Progress. During this scuffle, Tanden criticized TYT for taking money from Buddy Roemer. Konst replied that her own position was crowd-funded, and then she pulled out a smartphone and filmed a TYT Facebook Live segment threatening to expose Tanden for “all the money you’ve taken and all of the things you’ve done.” (Asked about this later, Konst would not specify what she was referring to, but said it would be the subject of an upcoming story.)

Although TYT itself does not back candidates—and staffers such as Konst aren’t involved with Justice Democrats—Uygur and Kulinski say they intend to use their shows and their social-media accounts to provide a platform and raise money for the candidates they endorse. This is not Uygur’s first venture into direct political action. In 2011, he launched Wolf PAC, a group that aims to end corporate political influence by forcing a new constitutional convention of the states. The convention would then, in theory, pass a “Free and Fair Elections Amendment” limiting corporate donations. (Five state legislatures have backed his plan so far; 34 are needed to trigger a convention.*) In February, Wolf PAC raised $55,000 for a Connecticut Democratic state Senate candidate, Greg Cava, who came up short in a special election in the state’s most Republican-leaning district. The previous Republican had won by 36 points; Cava lost by 10. “So the message I had after the election was, ‘If you’re gonna vote against Wolf PAC, go ahead and do it, but you should make sure you have a 27-point lead,'” Uygur said.

Justice Democrats and Brand New Congress aren’t the only progressive outfits that have sprung up to challenge their party’s incumbents. Another group founded by Sanders campaign alumni, We Will Replace You, was launched in February with a similar intent. Unlike the other groups, We Will Replace You does not intend to recruit candidates; it is more focused on applying pressure on the Democratic lawmakers it considers most vulnerable, though it also plans to eventually aid candidates who fit its mold.

Co-founder Claire Sandberg, who was Sanders’ director of digital organizing, is bullish about the idea of replicating the decentralized model of the Vermont senator’s presidential campaign on behalf of other long-shot challengers. “We want to make it clear to Democrats that they need to pick which side they’re on,” she said. “They can either pick the side of Donald Trump and his Wall Street cronies, or they can pick the side of the people who are on the streets.”

For now, Justice Democrats and Brand New Congress are putting in the behind-the-scenes work, recruiting and grooming a slate of candidates who will be rolled out later this year. The groups solicited the names of potential candidates from TYT viewers and progressive activists and received 8,000 suggestions. After four rounds of vetting, that list was whittled down to about 70 people. Of those, 30 candidates are currently being trained by Sanders campaign alumni. The first candidate the groups endorsed is Cori Bush, a pastor and nurse from St. Louis, who is running in a primary against nine-term Democratic Rep. Lacy Clay.

As for the Senate, Uygur and his allies’ most immediate targets are moderate Democrats Sens. Claire McCaskill of Missouri and Joe Manchin of West Virginia. (Manchin recently has dared progressive activists to primary him.) No progressive challenger has yet materialized to take on either of them, but Uygur is confident he will find contenders.

“I don’t have a time frame on it, but I can guarantee you that it’ll happen,” he said. “But Manchin is the tip of the iceberg. Who cares about Manchin? We’re going after the core of the party—he’s just the symptom.”

*Correction: This article originally misstated the number of states needed to trigger a constitutional convention.