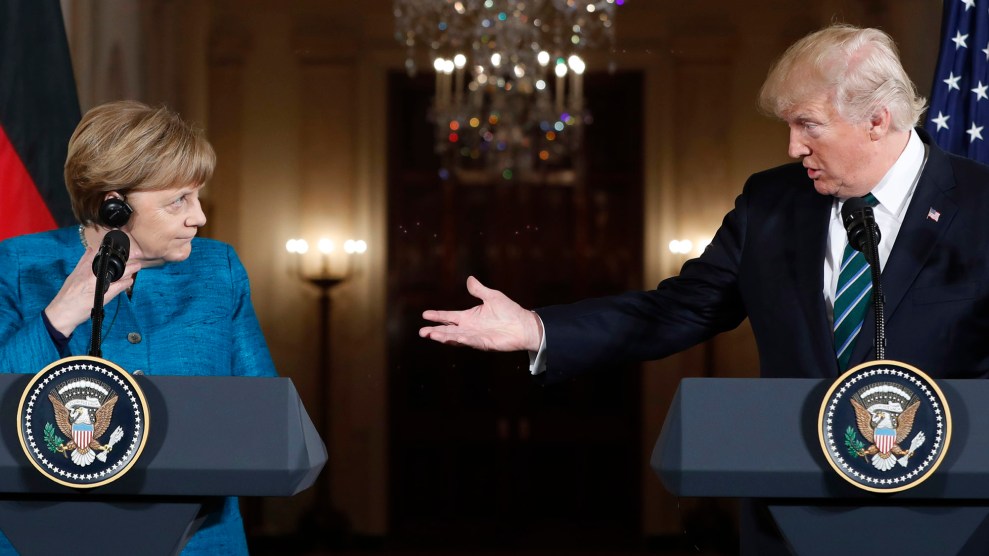 Donald Trump does not like taking responsibility for White House screwups. He’ll blame anyone else he can think of—even his friends at Fox News.

On Thursday, White House press secretary Sean Spicer set off an international incident when he suggested that British intelligence might have spied on Trump during the campaign in response to a request from President Barack Obama. Spicer made this remark while once again trying to defend his boss, who two weeks ago tweet-claimed—without offering any evidence—that Obama had “wiretapped” him at Trump Tower during the 2016 election. Since then the GOP chairs of the congressional intelligence committees (and many others) have declared there is no proof to back up Trump’s reckless charge, which apparently was based on a Breitbart news story that itself was based on a statement (or rant) by right-wing radio talker Mark Levin.

The obvious conclusion is that an angry Trump had tweeted out fake news falsely accusing his predecessor of criminal activity. But Spicer has continued to contend that Trump’s allegations had a factual basis of some sort. And at the Thursday briefing he cited Fox News analyst Andrew Napolitano, who claimed on that network that Obama had used the United Kingdom’s Government Communications Headquarters (GCHQ)—the British version of the National Security Agency—to eavesdrop on Trump with “no American fingerprints on this.” (Napolitano is no credible source. Like Trump, he has appeared on the radio show of conspiracy theorist Alex Jones. In 2010, Napolitano told Jones’ audience that it’s “hard for me to believe” that World Trade Center Building 7 “came down by itself” and that the 9/11 attacks “couldn’t possibly have been done the way the government told us.”)

Yet here was the White House depending upon a conspiracy theorist to charge that Obama enlisted the Brits to conduct illegal surveillance against Trump. The GCHQ went into a tizzy. Breaking with its tradition of almost always staying silent on public controversies, the British spy agency released a statement that said, No way! It called the allegation Spicer embraced “ridiculous.”  (British journalists were shocked to see any response from the supersecretive GCHQ.) And British officials told reporters they had privately received some form of apology from White House officials.

Yet on Friday afternoon, at a short press conference with German leader Angela Merkel, Trump indicated that he believed there was nothing to apologize for. Asked by a German reporter about the wiretapping allegation, he made a reference to “fake news” without addressing the matter. When a second German reporter pressed Trump on the issue, Trump first made a joke that he had something in common with Merkel. (The NSA had listened in on her cellphone.) Then he dismissed the significance of Spicer’s citation of the Fox News report: “We said nothing. All we did was quote…a talented lawyer on Fox.” The German reporter, Trump said, “shouldn’t be talking to me. You should be talking to Fox.”

Fox News, for its part, wasn’t sticking to Napolitano’s crazy story. Following the press conference, Fox anchor Shep Smith reported the network “has no evidence of any kind” to support the notion that Obama (with or without the Brits) had spied on Trump.

Shepard Smith just said Fox News has “no evidence of any kind” that Trump was surveilled “at any time, any way.” pic.twitter.com/0pzP1WWr2t

To sum up, the White House was citing phony information from Fox that Fox wouldn’t stand by. And now Trump was basically saying, You can’t hold me and my White House accountable for what we say. If someone says it on Fox News, that’s good enough for us. In other words, they report, we repeat.

This is a stunning statement and admission from a president: There is no need for me to confirm anything before tossing it out from the bully pulpit. It may not be a big news flash at this point, but Trump was eschewing any responsibility for White House statements. This is apparently Trump’s standard: If an assertion appears on Breitbart or on Fox News—if a conspiracy theory is spouted by a right-wing talk show—then it can be freely cited by the president of the United States without any consequence. With this stance, Trump has fully embraced his position as fake-newser-in-chief.