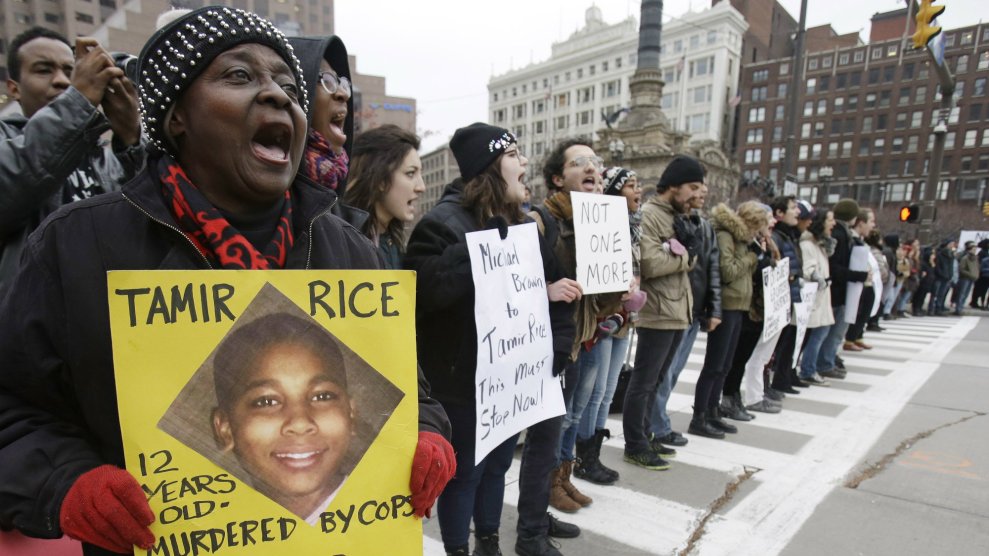 A protest in Cleveland in November 2014.Tony Dejak/AP

A 911 call taker whose actions may have helped lead to the officer-involved killing of 12-year-old Tamir Rice outside a Cleveland recreation center has been suspended for eight days, according to the Associated Press. More than two years after the killing, Constance Hollinger was suspended by Cleveland’s police chief for her failure to relay key details from the November 2014 call to a police dispatcher who sent officers to the scene. Those details included that the man who reported a person with a gun had said that the person might be a juvenile and that the gun might be “fake.” In a statement after a grand jury decision not to indict the officers involved, the city’s then-lead prosecutor said the 911 caller’s errors “were a substantial contributing factor” to the shooting, and that “had the officers been aware of these qualifiers… lives may not have been put at stake.”

In June 2015, Mother Jones uncovered further details about why the call was not properly relayed:

Hollinger entered information from the caller’s description of the scene into the dispatch computer system, according to an official investigation of the case. A few minutes later, dispatcher Beth Mandl read Hollinger’s notes from a computer screen as she transmitted the information to police officers over the radio… Recordings of the initial 911 call and the radio dispatch to officers, released by the Cleveland police department in November [2014] showed that the details about Rice’s suspected age and fake gun never reached [Officers] Loehmann and Garmback. After a five-month probe into the shooting by the Cuyahoga County Sheriff’s Department, which culminated in a 224-page report released in mid June [2015], investigators concluded that these details did not make it from Hollinger to Mandl. The report did not specify why. … According to a county official familiar with the investigation who spoke to Mother Jones, the details were not relayed because Hollinger did not enter them into the dispatch computer system.

It remained unclear why Hollinger did not input that information properly:

In an interview with Cuyahoga County sheriff’s detectives, Hollinger said that as a 911 call taker, she was responsible for retrieving “pertinent information” about each call—such as the caller’s name, address, location, and reason for the call—and assigning the call a priority level. But Hollinger refused to answer investigators’ questions about why she did not input the details about Rice’s suspected age and possibly fake gun, per the advice of her union-provided attorney.

Hollinger declined to comment to Mother Jones about her role in the case, citing the ongoing investigation and the Cleveland police department’s “stringent rules” about making public statements. Her attorney, Keith Wolgamuth, told Mother Jones that Hollinger “was advised to exercise her Fifth Amendment rights,” and that her actions last November 22 were within protocol.

Although a grand jury declined to indict the officers involved in the shooting, Timothy Loehmann and Frank Garmback, the two face an ongoing internal investigation into their conduct. The city of Cleveland settled a civil suit with Rice’s family for $6 million in April 2016.