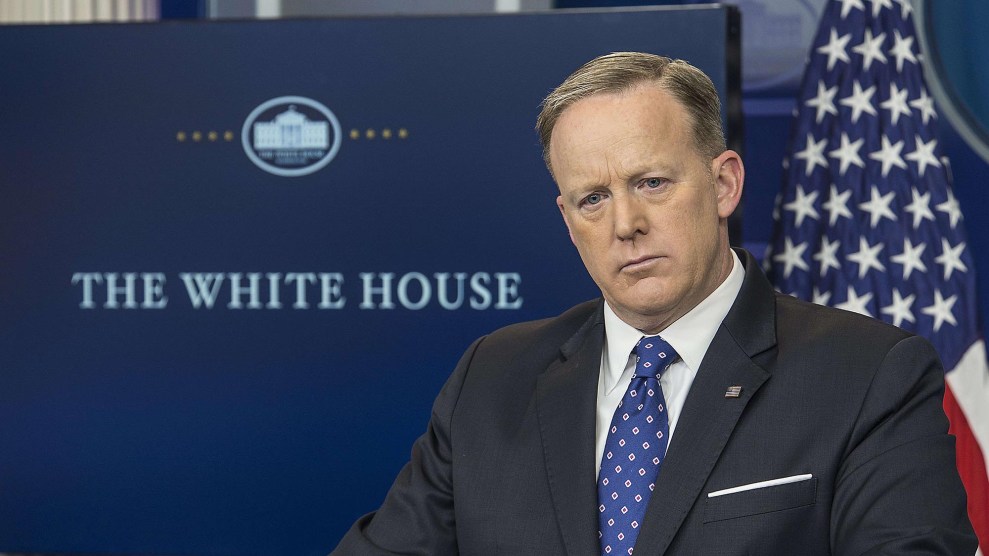 On Thursday, mere hours after Chairman Devin Nunes apologized to fellow members of the House intelligence committee for his wild stunt the day before, White House flack Sean Spicer defended Nunes, mischaracterized what he’d revealed, and tried to perpetuate his boss’ bizarre claim that President Barack Obama had ordered “tapps” on his Trump Tower phones during the election season.

In case you missed it, Nunes, a California Republican who was on Trump’s transition team, called a press conference Wednesday to announce that he’d seen intelligence reports indicating that communications of Trump associates—maybe even Trump himself—may have been intercepted in the course of lawful intelligence-gathering on foreign targets after the election. Nunes was so “alarmed” by this that he briefed House Speaker Paul Ryan, reporters (twice), and Trump himself before he shared the information with the ranking Democrat on the intelligence committee, which is investigating possible Trump-Russia collusion.

“What Chairman Nunes said is that there was evidence of surveillance that occurred during the election.” (Wrong.)

That Democrat, Rep. Adam Schiff of California, was incensed. In a statement Wednesday, Schiff said he’d expressed his “grave concerns” to Nunes, and told him that “a credible investigation cannot be conducted this way.” Did Nunes intend to lead the Trump-Russia probe, Schiff said, “or he is going to act as a surrogate of the White House. Because he cannot do both.”

“The reality is that [Nunes] made a decision,” Spicer said at Thursday’s White House press briefing. “He briefed the press first…I don’t hear too much crying about that.”

Spicer said there was absolutely nothing wrong with Nunes going to Trump because the information had “nothing to do with Russia.” He then proceeded to mischaracterize that information, saying: “It was helpful for the president to know that the investigation as he had asked for was starting to bear fruit.” Spicer was referring to Trump’s March 5 request for Congress to investigate the president’s baseless wiretapping tweets. “What Chairman Nunes said is that there was evidence of surveillance that occurred during the election, and I think that’s important to note.”

As his boss might say: Wrong! Nunes never indicated that any Trump associates were under surveillance prior to the election. What Nunes said was that they might have been caught on tape incidentally during the transition—after the election. Nunes’ revelations in fact undermine the claim that Obama ordered Trump’s phones tapped. Ordering the illegal wiretap of an American citizen would be a serious crime. And Trump and Spicer, of all people, should know that falsely accusing someone of a serious crime is defamatory at best—if done with malicious intent, it’s also libelous.