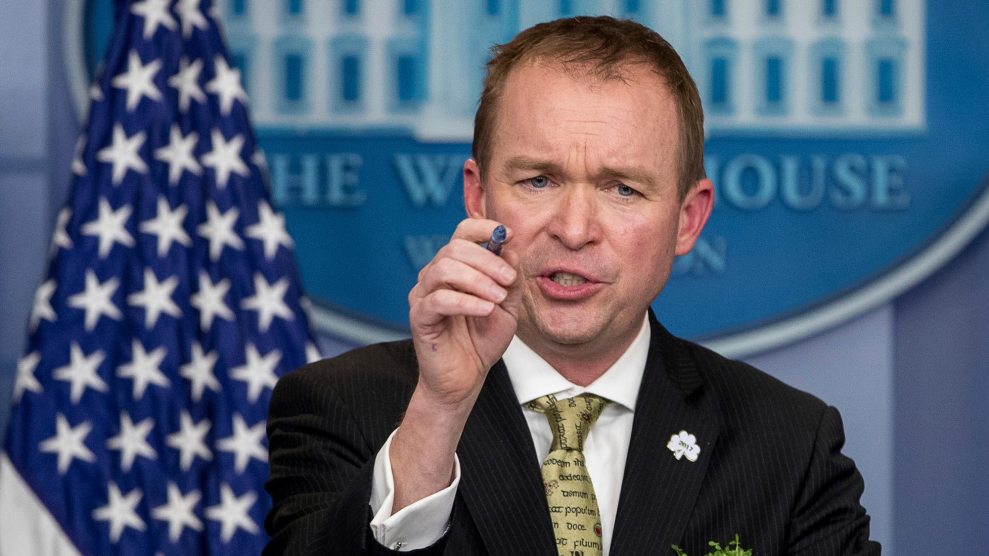 Today, the Trump administration released its preliminary 2018 budget proposal, which would eliminate 19 federal agencies and gut a wide array of programs aimed at helping the working poor and the unemployed. At the same time, Trump’s budget calls for a major increase in defense spending and spending billions on the construction of a border wall.

At a press briefing on Thursday afternoon, Office of Management and Budget Director Mick Mulvaney did little to alleviate the impression that the most vulnerable would suffer under these budget cuts. “You described this as a ‘hard power budget.’ Is it also a hard-hearted budget?” asked CNN’s Jim Acosta. “No, I don’t think so,” Mulvaney responded. “I think it’s probably one of the most compassionate things we can do.”

Yet compassion was in short supply as Mulvaney tried to explain the administration’s budget priorities. Here are four of his most heartless statements:

Meals on Wheels doesn’t work. A reporter asked Mulvaney about proposed cuts to the Community Development Block Grant Program, which would lead to cuts on Meals on Wheels in some states. He responded that the program, which feeds elderly people, and ones like it are “just not showing results” and “don’t work.”

Fighting climate change is a rip-off. “We’re not spending money on that anymore,” Mulvaney said. “We consider that to be a waste of your money.”

Mulvaney on climate change: “We’re not spending money on that anymore. We consider that to be a waste of your money” https://t.co/rYGKiRnTem

Starvation and famine? Yawn. Another reporter asked Mulvaney about the administration’s plans to reduce spending on the United Nations and foreign aid, despite famine and starvation facing 20 million people—a “humanitarian crisis,” according to the UN. “Are you worried that some of the most vulnerable people on earth will suffer?” the reporter asked. “We’re absolutely reducing funding to the UN and to the various foreign aid programs,” Mulvaney said. “That should come as a surprise to no one who watched the campaign.”

Q: Are you worried the world’s most vulnerable people will suffer because of foreign aid cuts?
Mulvaney: (America first) pic.twitter.com/RmbDCJeiX5