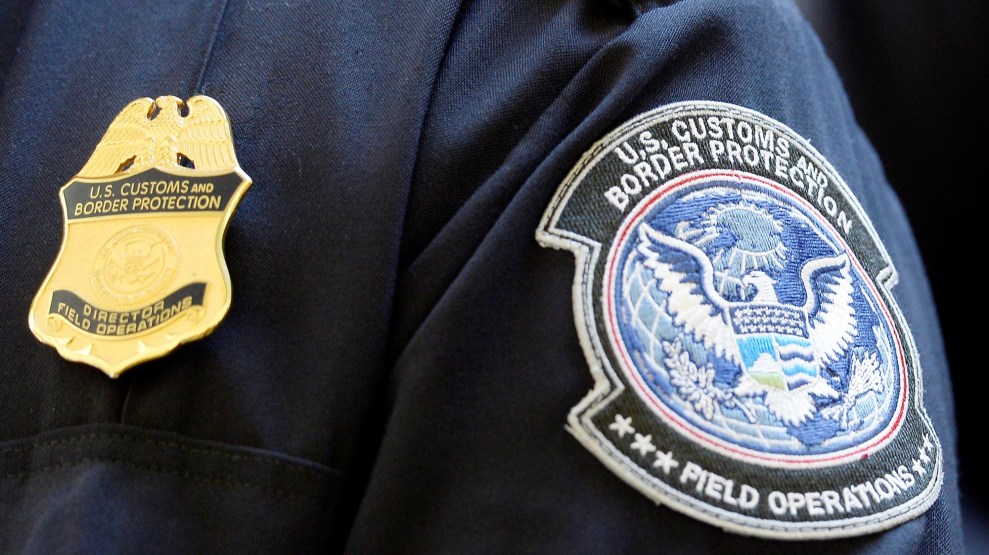 More than a month after Sen. Ron Wyden (D-Ore.) requested information about US Customs and Border Protection’s practice of searching cell phones at US borders and airports, he’s still waiting for answers—but he’s not waiting to introduce legislation to end the practice.

“It’s very concerning that [the Department of Homeland Security] hasn’t managed to answer my questions about the number of digital searches at the border, five weeks after I requested that basic information,” Wyden, a leading congressional advocate for civil liberties and privacy, told Mother Jones on Tuesday through a spokesman. “If CBP were to undertake a system of indiscriminate digital searches, that would distract CBP from its core mission, dragging time and attention away from catching the bad guys.”

Wyden’s request to DHS and CBP came on the heels of a February 18 report from the Associated Press of a “fivefold increase” in electronic media searches in fiscal year 2016 over the previous year, from fewer than 5,000 to nearly 24,000. It also followed Homeland Security Secretary John Kelly’s suggestion that visitors from a select group of countries, mainly Muslim, might be required to hand over passwords to their social media accounts as a condition of entry. (That comment came a week after President Donald Trump first unveiled his executive order? banning travel from seven majority-Muslim countries.)

The Knight First Amendment Institute, which advocates for freedom of speech, sued DHS on Monday for records relating to the seizure of electronic devices at border checkpoints. Wyden requested similar data on CBP device searches and demands for travelers’ passwords.

“There are well-established legal rules governing how law enforcement agencies may obtain data from social media companies and email providers,” Wyden wrote in the February 20 letter to DHS and CBP. “By requesting a traveler’s credentials and then directly accessing their data, CBP would be short-circuiting the vital checks and balances that exist in our current system.” The senator wrote that the searches not only violate civil liberties but could reduce international business travel or force companies to outfit employees with “burner” laptops and mobile devices, “which some firms already use when employees visit nations like China.“

The Supreme Court found that police need warrants to search cell phones. But the law applies differently at the border.

“Folks are going to be less likely to travel freely to the US with the devices they need if they don’t feel their sensitive business information is going to be safe at the border,” Wyden said Tuesday, noting that CBP can copy the information it views on a device. “Then they can store that information and search it without a warrant.”

Wyden will soon introduce legislation to force law enforcement to obtain warrants before searching devices at the border. His bill would also prevent CBP from compelling travelers to reveal passwords to their accounts.

A DHS spokesman said in a statement that “all travelers arriving to the US are subject to CBP inspection,” which includes inspection of any electronic devices they may be carrying. Access to these devices, the spokesman said, helps CBP agents ascertain the identity and admissibility of people from other countries and “deter the entry of possible terrorists, terrorist weapons, controlled substances,” and other prohibited items. “CBP electronic media searches,” the spokesman said, “have resulted in arrests for child pornography, evidence helpful in combating terrorist activity, violations of export controls, convictions for intellectual property rights violations, and visa fraud discoveries.”

In a March 27 USA Today op-ed, Joseph B. Maher, DHS acting general counsel, compared device searches to searching luggage. “Just as Customs is charged with inspecting luggage, vehicles and cargo containers upon arrival to the USA, there are circumstances in this digital age when we must inspect an electronic device for violations of the law,” Maher wrote.

But in a unanimous 2014 ruling, the Supreme Court found that police need warrants to search cell phones. Chief Justice John Roberts wrote in the opinion that cell phones are “such a pervasive and insistent part of daily life that the proverbial visitor from Mars might conclude they were an important feature of human anatomy.” In response to a Justice Department argument that cell phones were akin to wallets, purses, and address books, Roberts wrote: “That is like saying a ride on horseback is materially indistinguishable from a flight to the moon.”

The law, however, applies differently at the border because of the “border search doctrine,” which has traditionally given law enforcement wider latitude under the Fourth Amendment to perform searches at borders and international airports. CBP says it keeps tight controls on its searches and is sensitive to personal privacy.

Wyden isn’t convinced. “Given Trump’s worrying track record so far, and the ease with which CBP could change its guidelines, it’s important we create common-sense statutory protections for Americans’ liberty and security,” he says.

CBP provided data that confirmed the device search numbers reported earlier by the Associated Press but later told Mother Jones that the numbers are slightly off due to an “anomaly” in their tabulation. The agency has not yet provided corrected figures. “Despite an increase in electronic media searches during the last fiscal year,” the CBP spokesman said, “it remains that CBP examines the electronic devices of less than one-hundredth of one percent of travelers arriving to the United States.”

Sophia Cope, a staff attorney with the Electronic Frontier Foundation who has written extensively about searches of electronic devices, says that searches of mobile devices appear to be on the rise. “They realized that people are carrying these devices with them all the time, it’s just another thing for them to search,” she says. “But also it does seem that after the executive order that they’ve been emboldened to do this even more.”

Wyden says that the data collection creates an opportunity for hackers. “Given how frequently hackers have stolen government information,” he says, “I think a lot of Americans would be worried to know their whole lives could be sitting in a government database that’s got a huge bull’s-eye on it for hackers.”

This story has been updated to include CBP’s claim that the device search numbers are slightly inaccurate.