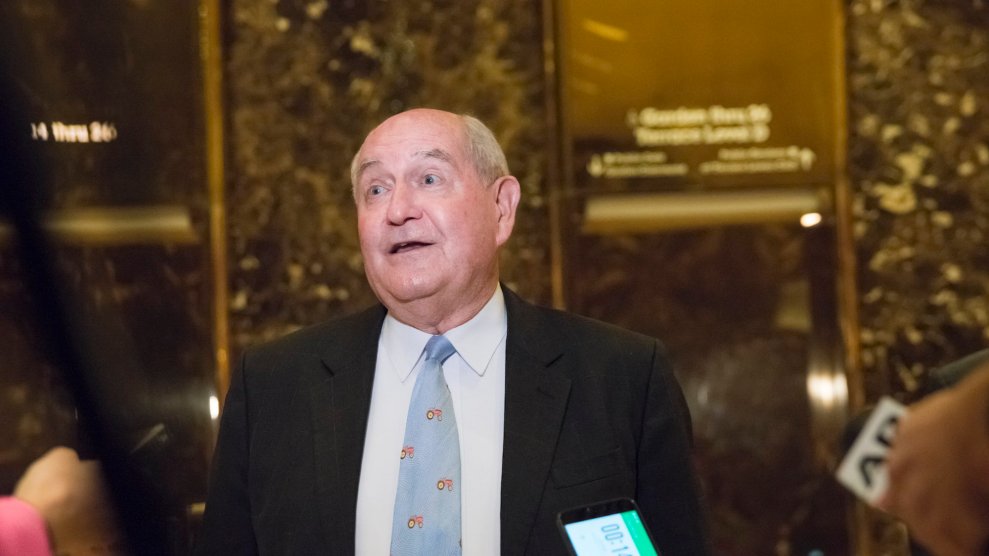 USDA chief-in-waiting Sonny Perdue basks in the golden glow of the Trump Tower lobby. <a href="http://www.zumapress.com/zpdtl.html?IMG=20161130_zaa_d20_547.jpg&CNT=25">Albin Lohr-Jones</a>/DPA via ZUMA Press

Back in 2002, a racially divisive fertilizer and trucking magnate shocked the political world by winning Georgia’s governorship, after being down in the polls the entire campaign. As governor, Sonny Perdue refused to divest himself of his companies, declaring, “I am a small business owner, I’m in the agri-business…That’s about as blind a trust as you can get. We trust in the Lord for rain and many other things.” (Hat tip, Politico.)

Perdue did plenty of favors for friends while occupying Georgia’s governor’s mansion.

Perhaps savoring the similarities with himself, President Donald Trump tapped Perdue as his pick for secretary of the US Department of Agriculture way back in January, promising “big results for all Americans who earn their living off the land.” The nomination promptly languished for seven weeks, with no date set for Senate confirmation hearings amid complaints of unreturned calls to the White House from sources close to Perdue. On Friday, Perdue’s nomination took a major step forward when the former governor filed ethics papers required by the Senate.

His Public Financial Disclosure Report reveals a Trumpian tangle (though on a much smaller scale) of business interests and obligations, including three Georgia-based agribusinesses and berths on the boards of directors of two agribusiness trade groups. In other words, Trump plucked his agriculture secretary from the very industry the USDA exists to regulate. Unlike the president—and himself, during his time as Georgia governor—Perdue (no relation to the Maryland chicken family) pledged to place the businesses in a blind trust (legal, not theological) and step down from the boards.

While the existence of Perdue’s fertilizer, trucking, and grain-trading firms were already well known, his presence on those two trade group boards has drawn little attention. Both groups will presumably be thrilled to see one of their own take the USDA helm.

A recent EWG report characterized Perdue as “mired in ethical lapses, self-dealing and back-room deals that raise troubling questions about his fitness to run the department.”

As for the Georgia Agribusiness Council, Perdue is still listed as the board of directors’ secretary. The council’s “star sponsors” include Bayer Cropscience, Syngenta, Coca-Cola, and CropLife America, the pesticide industry trade group.

As Politico notes, Perdue did plenty of favors for friends while occupying Georgia’s governor’s mansion. The journal found “more than a dozen instances when he gave positions to business associates and campaign donors, and other occasions when he rewarded his state staff with opportunities in his agriculture and shipping empire after he left office.” Even as Perdue awaits confirmation, one of his Georgia associates is already waiting for him in Trump’s USDA, Politico reports: “Heidi Green, a partner of Perdue’s shipping business who also worked for him in Georgia state government, landed a political appointment as senior adviser at USDA in January. She’s now being mentioned as a likely candidate to serve as his chief of staff.”

Meanwhile, a recent report from Environmental Working Group characterized Perdue as “mired in ethical lapses, self-dealing and back-room deals that raise troubling questions about his fitness to run the department.” Two of the many examples cited by EWG—a $100,000 tax break gained by Perdue through well-timed legislation; an appointment to a powerful post for his cousin and business partner, now the junior senator from Georgia, David Perdue—I teased out in this January post.

EWG also shows that Perdue appointed execs from his fertilizer and grain-trading businesses to powerful state boards—again, without divesting himself of those businesses. Then there’s this:

While in office, Perdue failed to meet his own ethical standards by repeatedly taking gifts—including sports tickets and first-class flights—from registered lobbyists. Shortly after taking office, Perdue signed his first executive order, which prohibited any state official from accepting gifts worth more than $25 from lobbyists.

However, a query of lobbyist expenditures shows that Perdue received at least 53 gifts from registered lobbyists over the monetary limit—totaling more than $23,000–between 2006 and 2010, including a $2,400 flight to a NASCAR race. In 2003, the Office of the Inspector General—an office established by Perdue’s second executive order—investigated whether Perdue’s personal use of state helicopters was appropriate, ultimately leading the Office of the Attorney General to prohibit such uses.

Even so, Perdue doesn’t carry quite the baggage of some of Trump’s more outlandish Cabinet picks, like Andy Puzder, who ultimately declined to face a Senate confirmation hearing for the Labor Department post. He’ll likely zoom through confirmation hearings in the Senate, and get a brisk slap on the back from his cousin and erstwhile business partner, Sen. David Perdue (R-Ga.).