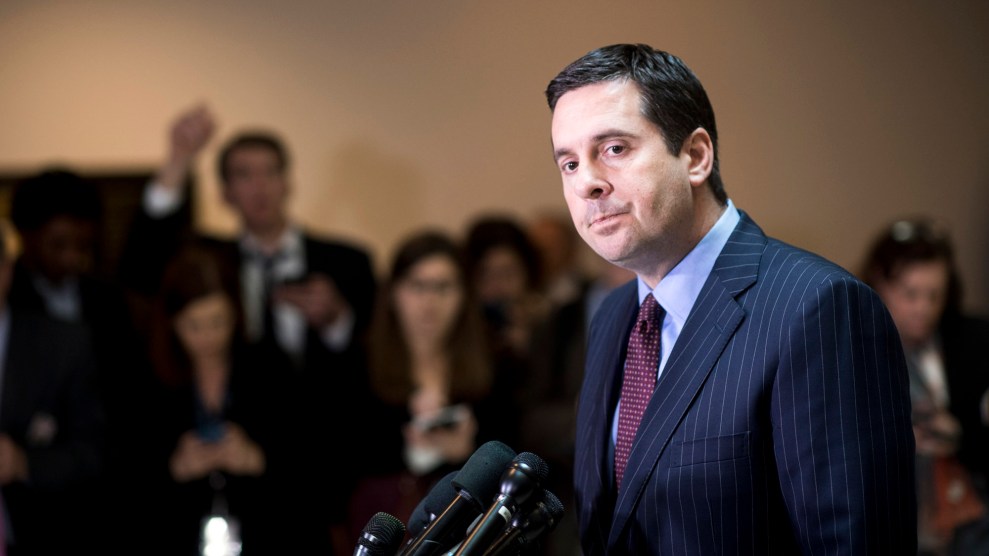 Rep. Devin Nunes (R-Calif.), the now-famous (for the wrong reasons) chair of the House intelligence committee, held another weird press conference Friday morning. It wasn’t as much of a doozy as his double feature on Wednesday, when he claimed he had been given information indicating that members of Donald Trump’s presidential transition team, including possibly Trump himself, had been picked up during lawfully authorized intelligence surveillance of other targets and that their identities had been disclosed in intelligence reporting based on these intercepts. That triggered a hullabaloo—had Nunes revealed classified information? was he pulling this stunt to help Trump?—and his actions prompted Democrats to question Nunes’ ability to lead an effective probe of Moscow’s meddling in the 2016 campaign and the interactions between the Trump camp and Russia. On Thursday, in a private meeting of the committee, Nunes apologized to his fellow committee members for his bizarre pressers but did not fully explain his move or share the information he had. This was part of an already bad week for Nunes.

Nunes’ own account bolsters the argument that he is not a credible manager of the probe of the Trump-Russia scandal.

On Friday, Nunes didn’t make anything better. In fact, with a series of elliptical statements, he suggested that on Wednesday he had gone off half-cocked—which is not SOP for an intelligence committee chairman in charge of a highly sensitive and politically charged investigation. Asked repeatedly about the information that was the basis for his charge that Trump and his associates were inappropriately “unmasked” in classified intelligence reports based on legally authorized top-secret surveillance of foreign targets, Nunes said he did not have that material in hand. He noted he had “viewed” the documents this week. And he said that he hoped to receive copies of the material “from the NSA and other agencies” on Friday, over the weekend, or early next week. He also indicated that there were more documents related to this matter than he had seen. Nunes added that he had been aware of the “unmasking” prior to reviewing the documents he saw.

Put this all together, and the scenario looks like this: Someone told Nunes that the identities of Trump and/or Trump associates appeared in intelligence reports based on surveillance conducted during the transition. Nunes then reviewed some of these documents this week. And on Wednesday afternoon (two days after a holding a day-long hearing with FBI chief James Comey and NSA head Mike Rogers), Nunes—without telling his fellow committee members and without conducting any thorough examination of the matter—went public. That is, he went rogue. And he rushed to the White House to share his half-baked information with Trump. (Afterward, Trump declared that he was now “somewhat” vindicated for claiming Obama had illegally wiretapped him in Trump Tower during the election—despite the fact that Nunes’ statements were not related to Trump’s fact-free charge.)

It appears that as soon as Nunes saw whatever documents he reviewed, he ran to the microphones and then dashed to the White House to provide information to a president whose associates are under investigation by Nunes’ own committee. And he did this without any deliberate examination of the material. (By the way, Nunes was part of Trump’s national security presidential transition team.) This is not how effective oversight works. Nunes’ own account bolsters the argument that he is not a credible manager of the probe of the Trump-Russia scandal.

At the Friday press conference, Nunes would not say who had tipped him off to these documents. He would not deny that the Trump White House had pointed him in this direction. He did say, “I’ve been very clear…there was no wiretapping of Trump Tower. That didn’t happen.”

Nunes also announced that the former head of Trump’s presidential campaign, Paul Manafort, had volunteered to talk to the intelligence committee. (This week, AP reported that Manafort a decade ago signed a $10 million-per-year contract with a Russian oligarch close to Vladimir Putin to mount a campaign to bolster Putin’s image in the United States and other countries. Mother Jones reported that Manafort also helped this oligarch, who was suspected of having links to Russian organized crime, try to obtain a visa to enter the United States after US officials had banned him from the country.)

But Nunes did not say whether Manafort would be questioned during a public hearing. Moreover, Nunes oddly scoffed at the prospect of the committee grilling other people named in media accounts about Trump associates interacting with Russians. “We’re not going to get into a Neo-MacCarthy era,” he said, “when we are bringing in Americans just because they were mentioned in a press story.”

UPDATE: At his Friday afternoon briefing, White House press secretary Sean Spicer was asked if he could deny the White House passed the information to Nunes. He replied, “I’m not aware of where he got the documents from.”