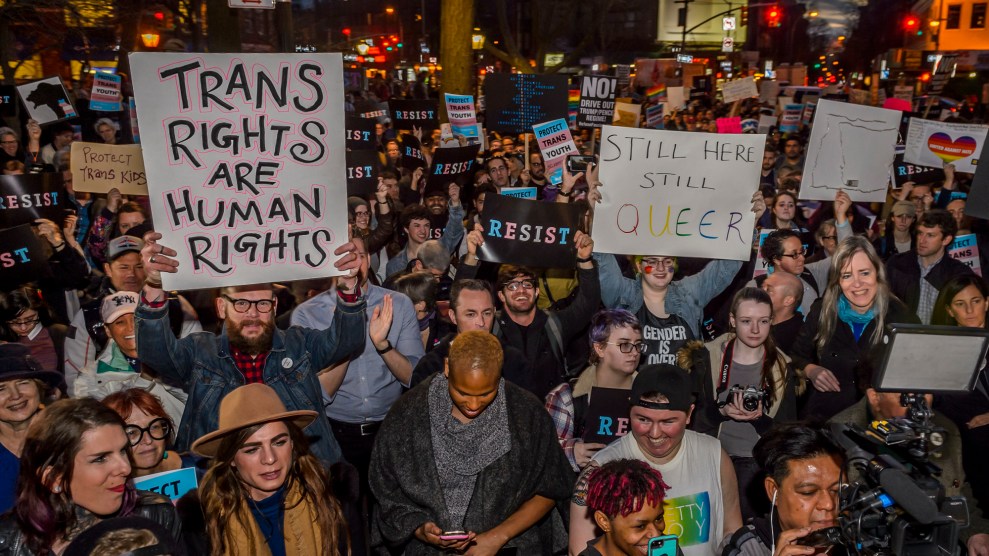 Protesters rally in New York against the Trump administration's decision in February to rescind protections for transgender students.Erik McGregor/AP

Democrats in Congress are calling on the Trump administration to tackle violence against transgender women of color, following a string of murders in January and February. In a letter to Attorney General Jeff Sessions, six representatives—including Rep. Keith Ellison, the deputy chair of the Democratic National Committee—urged the Justice Department to investigate recent killings of black transgender women under federal hate crime laws. Of all such murders from 2013 to 2015, they wrote, “not a single one was prosecuted or reported as a hate crime, despite evidence in multiple cases that assailants were motivated by the victim’s gender identity.”

Transgender women are four times more likely than other women to be murdered, the Democrats wrote in the letter, made public on Monday. And reports of such crimes appear to be on the rise: At least 27 trans people were killed last year, almost all trans women of color, according to the LGBT advocacy group GLAAD. During the first two months of 2017, at least seven trans women of color met the same fate.

“For many transgender people in the United States fears of violence are a constant presence in their lives,” wrote the members of Congress.

But the Democrats might not get much sympathy from Sessions, who’s been known to oppose the expansion of rights for gay and transgender people. Last month, the attorney general pushed the Trump administration to rescind protections for transgender students in schools. His record as a senator doesn’t inspire much hope, either: He strongly opposed the 2009 Matthew Shepard and James Byrd Jr. Hate Crimes Prevention Act, which extended federal hate crime protections to people victimized because of their sexual orientation, gender, or gender identity. Now as attorney general, it’s up to him to sign off on criminal prosecutions brought under the act, as my colleague Pema Levy has reported.

Back in 2014, the Justice Department started publishing statistics on hate crimes against gender-nonconforming people. From 2013 to 2015, between 0.5 percent and 1.8 percent of all single-bias hate crimes were motivated by gender identity bias, according to the FBI. (The bureau didn’t specify how many of these were murders or how many targeted trans women of color specifically.) In December last year, for the first time ever, a man pleaded guilty to a federal hate crime for murdering his girlfriend because she was transgender. “Today’s landmark guilty plea…signals the Justice Department’s determination to combat hate crimes based on gender identity,” said then-Attorney General Loretta Lynch.

But the Justice Department still has a long way to go—and its tracking of such crimes is far from complete. The FBI’s hate crime statistics only reflect the cases that are reported to authorities, an FBI spokesman told Mother Jones, and experts say many transgender victims are reluctant to bring their cases forward. Some crime-reporting programs at the state level have also opted, for budgetary reasons, not to collect data on hate crimes against trans people, the spokesman said. (That didn’t stop Sessions from arguing in 2009 that states were doing an adequate job prosecuting such attacks, and that federal prosecutions were therefore unnecessary.)

The recent uptick in violence seems to have prompted the Democratic legislators to demand more accountability. “No person, regardless of race, sex, gender identity, or religious affiliation should worry if they will be shot outside their home or stabbed while going to work,” the lawmakers wrote to Sessions, “but for many transgender people in the United States fears of violence are a constant presence in their lives.”