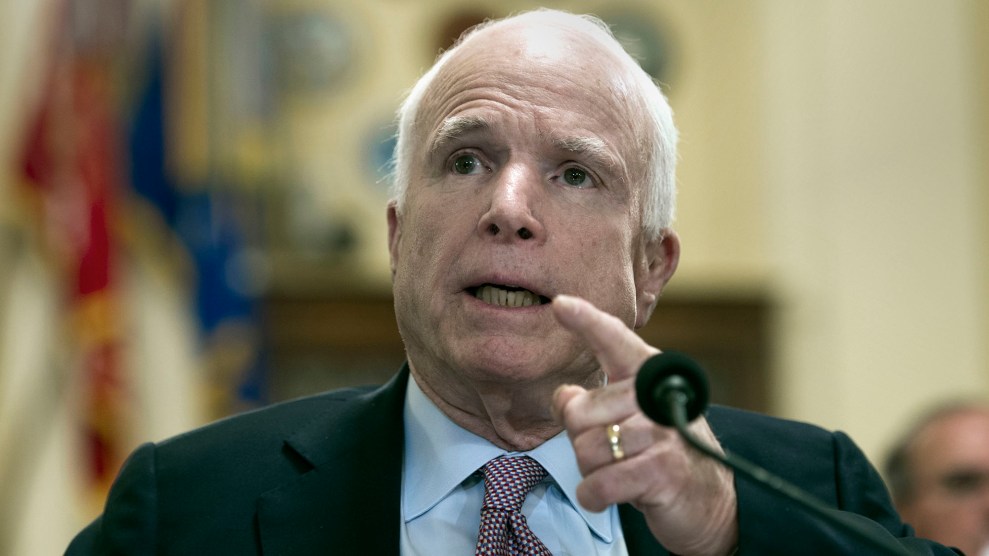 “Back after 9/11, Sen. [Joe] Lieberman and I said we ought to have a select commission, and nobody wanted it, and then eventually it happened,” McCain told reporters in the Capitol. “The pressure will grow, particularly in light of the events of the last 24 hours.”

McCain was referring to the actions of Rep. Devin Nunes (R-Calif.), the chairman of the House Intelligence Committee, who drew criticism Wednesday for telling the press and President Donald Trump that the intelligence community may have unintentionally collected communications by Trump and his aides during the transition. Nunes did so without consulting his colleagues on the committee, and he may have disclosed classified information. His move has led Democrats and others to question his ability to oversee his committee’s investigation of the Trump-Russia scandal and Moscow’s hacking of the 2016 campaign. Nunes’ actions, McCain said, are “another reason for a select committee.” (A select committee is a special panel established by Congress to investigate a particular matter. Such a committee might have more independence and function in a more bipartisan manner than a traditional committee. It differs from a select commission, whose members are chosen by congressional leaders of both parties and the president and which operates outside the congressional system.)

Nunes apologized to his colleagues on Thursday. But criticism continued to mount. Sen. Ron Wyden (D-Ore.), a member of the Senate Intelligence Committee, which is also investigating Russian interference in the 2016 elections, told reporters in the Capitol, “Not telling his members and briefing the president does not meet my definition of doing textbook, bipartisan oversight.”

“I think the actions of the House chair yesterday certainly call into question the ability of that committee to perform an independent investigation,” Sen. Angus King (I-Maine), another member of the intelligence committee, told Mother Jones. “But I don’t think that applies to the Senate committee. So far we are working on a bipartisan basis and I think we can get to the bottom of this.”