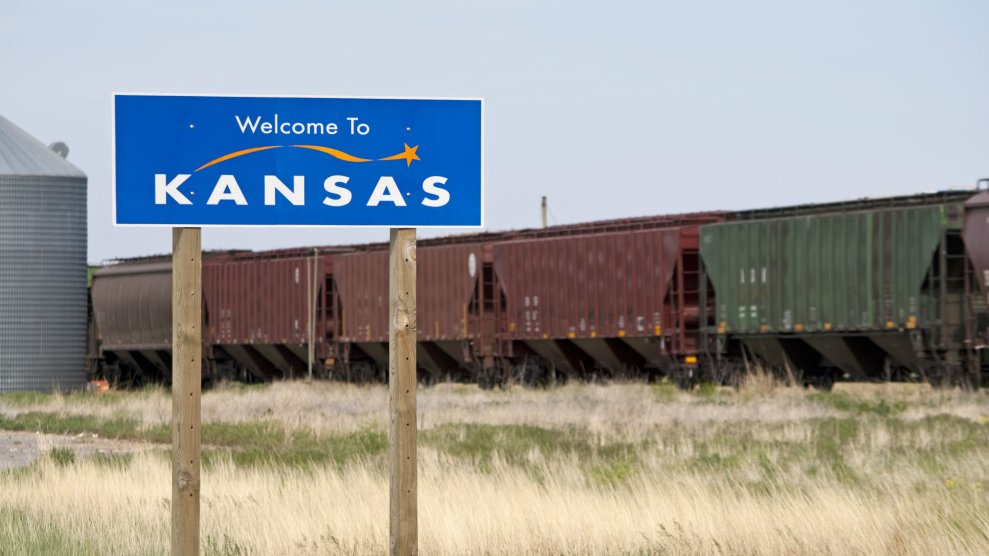 While Republicans in DC are pushing for massive cuts to Medicaid, John Eplee and other Republicans in one of the country’s most conservative states are fighting to expand the program.

Eplee is a family doctor in Atchison, Kansas—a town of about 11,000 in a county that Donald Trump won by 32 points. He’s also a Republican politician; last year, he ran for and won a seat in the state House of Representatives on a platform that included improving access to health coverage for poor residents of his district.

For Eplee, one solution to Kansas’ health care woes can be found in a law that is deeply unpopular among Republicans nationally: Obamacare. Specifically, he’s interested in the part of Obamacare that allows states to offer Medicaid—the federal-government-funded program that provides insurance for poor people—to a much wider population.

On the campaign trail, Eplee cautiously embraced Medicaid expansion, talking about the issue as he knocked on more than 2,000 doors in his district. He says about two-thirds of the voters he spoke to supported the idea. “That’s why I was willing to get onboard and be supportive of it,” Eplee says. “My voters wanted me to do that.”

“I’m out here in the rural area practicing [medicine], and I see it every day…It just takes one event, and then they’re wiped out financially.”

In February, Eplee joined the overwhelming majority of his House colleagues in voting to expand Medicaid in Kansas. The state Senate is now debating the idea. But Republicans in Washington, DC, might complicate the situation; the latest version of their bill to repeal Obamacare could make expansion impossible in Kansas.

Prior to Obamacare—officially known as the Affordable Care Act—Medicaid only covered a select segment of the low-income population: the elderly, disabled people, parents, and children. Other adults were excluded in most of the country, as was anyone who earned even slightly above poverty wages, leaving much of the working poor on their own for buying health insurance. The ACA allowed states to enroll anyone who makes up to 138 percent of the federal poverty level ($33,600 for a family of four in 2017), with the federal government footing almost the entire bill for these new enrollees.

Initially, the ACA required all states to participate in the Medicaid expansion, but the Supreme Court ruled in 2012 that the feds couldn’t compel states to comply. So far, 31 states and the District of Columbia have expanded Medicaid, and more than 11 million people have gained insurance through the program.

But a number of GOP-controlled states, including Kansas, opted out, rejecting billions of dollars of federal funds and leaving millions of poor people out of the program. Many Republicans argued Medicaid expansion was just another unsustainable piece of the welfare state. They warned that the federal government might one day break its promises to pay for the bulk of the program, leaving states on the hook.

According to a study by the nonpartisan Kansas Health Institute, about 152,000 people would join KanCare, the state’s Medicaid program, if Kansas adopted the ACA expansion. Roughly 80,000 of those people currently lack health insurance coverage, while 71,000 would ditch their current coverage to jump onto Medicaid.

Now, Eplee has joined a coalition of moderate Republicans and Democrats that is trying to make that happen. They want their state to accept everything Obamacare has to offer before their brethren at the national level can tear it apart—and they’ve got the state business and medical communities on their side. Voters agree, too, with 82 percent supporting Medicaid expansion in a poll sponsored by the American Cancer Society Cancer Action Network.

“I’m out here in the rural area practicing [medicine], and I see it every day,” Eplee says. “When I gave my testimony [in favor of Medicaid expansion], I gave examples of the working poor and their inability to get health insurance and to get the help they need. It puts them in very dire, precarious financial situations of being made medically bankrupt by one illness or one disease. It just takes one event, and then they’re wiped out financially.”

“It is really sad to me that these decisions that have real life implications for the people who live in our state have been made because of ideologically driven dogma, and not for good, sound policy decisions.”

When the Kansas House collected testimony on the issue earlier this year, more than 160 organizations and individuals supported expansion. Just four offered testimony that opposed the idea—mostly national conservative organizations.

“It is really sad to me that these decisions that have real life implications for the people who live in our state have been made because of ideologically driven dogma, and not for good, sound policy decisions,” says state Rep. Joy Koesten, a Republican representing suburban Kansas City, who was first elected to office last year and supports Medicaid expansion. “That’s one of the reasons that so many of us ran for office this last time, and I’m glad that we were able to prevail.”

Koesten was part of a group of moderate Republicans that last year reclaimed control of the state legislature from the far right of the party. Five years earlier, Republican Gov. Sam Brownback had waged an electoral war to purge the party of legislators who opposed his ambitious tax cuts, ushering in a conservative takeover executed with the help of the Koch brothers’ organization Americans for Prosperity. But after Brownback’s policies left an enormous hole in the state budget, the moderates roared back in the 2016 elections. Moderate Republicans primaried sitting conservatives, and Democrats knocked off others. Out of 165 total lawmakers in the state Senate and House, there are 49 new members this year.

The consequences became clear late last month, when the state House voted 81-44 in favor of Medicaid expansion. “There was just enough change in the primary and the general election that tweaked the control over to the moderate side, where this was unstoppable at this point in time,” explains Robert St. Peter, president and CEO of the Kansas Health Institute.

The state’s hospitals have long been backers of expanding Medicaid, but they took a more active role last year. The Kansas Hospital Association launched a We Care, We Vote campaign. “We talked to health care providers all over the state and others in the industry to really go out in mass and support people that supported those causes that were important to them,” says association vice president Cindy Samuelson. The organization has a ticker on its website tabulating the total amount of federal money that the state has lost by not expanding Medicaid—more than $1.7 billion at the time of this article’s publication.

Out of 107 rural hospitals in Kansas, 31 are considered “vulnerable” and at risk of closure.

The hospitals have good reason to be upset about the money the state is leaving on the table. Many hospitals, especially in rural parts of the state, are under increasing financial strain from treating uninsured patients. In 2015, Mercy Hospital in Independence, Kansas, closed. Independence has just 9,500 residents, but the closure attracted media coverage from around the state.

“They lost 192 jobs, it impacts their ability to get new businesses to come to Independence,” says David Jordan, executive director of the Alliance for a Healthy Kansas, a pro-Medicaid-expansion organization started last year with support from local chambers of commerce and industry groups. “When people get sick they call the EMS, and they’re sometimes brought to Bartlesville, Oklahoma, or Joplin, Missouri, for care, where the two bigger hospitals are.”

An analysis by iVantage Health Analytics, an industry advisory group, found that out of 107 rural hospitals in Kansas, 31 are considered “vulnerable” and at risk of closure. The report didn’t name the hospitals in trouble, leaving each community worried that its hospital could be next.

Jordan’s group hosted community discussions throughout the state last summer, attracting hospital executives and many of the moderate Republican candidates to the events. In Arkansas City, a town of about 12,000 in southwestern Kansas, attendees heard about how the town raised the sales tax by one-cent to support the local hospital. “That’s roughly the same amount of money that would have been brought in had legislators decided to expand KanCare,” Jordan says.

National Republicans’ plan to repeal Obamacare could put them on a collision course with state lawmakers such as Eplee and Koesten. An amendment introduced this week by House Speaker Paul Ryan (R-Wisc.) could make it essentially impossible for Kansas to expand Medicaid. White House Press Secretary Sean Spicer was asked about the issue at Tuesday’s press briefing.

The fight over Medicaid is causing headaches for the national GOP, as well. Of the 31 states that have adopted expansion, 16 are currently run by Republican governors. Ohio’s John Kasich has been especially vocal when it comes to urging Congress not to shrink the program. “That is a very, very bad idea, because we cannot turn our back on the most vulnerable,” he said last month, adding that he won’t “sit silent” as Republicans move forward with plans to scrap Medicaid expansion.

Hours before the repeal bill was unveiled to the public, four Republican US senators—all representing states that have already adopted the Medicaid expansion—said they might not support the the bill because it would harm people on Medicaid. And that warning shot came before the Congressional Budget Office estimated that 14 million fewer people would have access to Medicaid by 2026 under the GOP plan.

Back in Kansas, the state Senate heard testimony for and against Medicaid expansion this week, and it will likely vote on the matter soon. But even if the measure passes, the legislature would still need to scrape together a two-thirds majority to overturn a likely Brownback veto. The governor has never been a fan of Obamacare, and he’s long resisted calls for Medicaid expansion. During his state of the state address in January, he warned that lawmakers shouldn’t pursue the idea given the program’s uncertain future. “It would be foolish to endorse the Obamacare expansion of Medicaid now—akin to airlifting on to the Titanic,” he said. “Kansas was right. Kansas should stay the course.”

In the end, Kansas lawmakers might be saved by Donald Trump. Brownback is reportedly set to be picked as an ambassador and, if so, would leave the state for Rome. It’s unclear if Lieutenant Gov. Jeff Colyer would offer a different perspective on Medicaid. But with the uncompromising Brownback potentially leaving office as the nation’s most unpopular governor, perhaps Colyer will be more willing to cut deals.