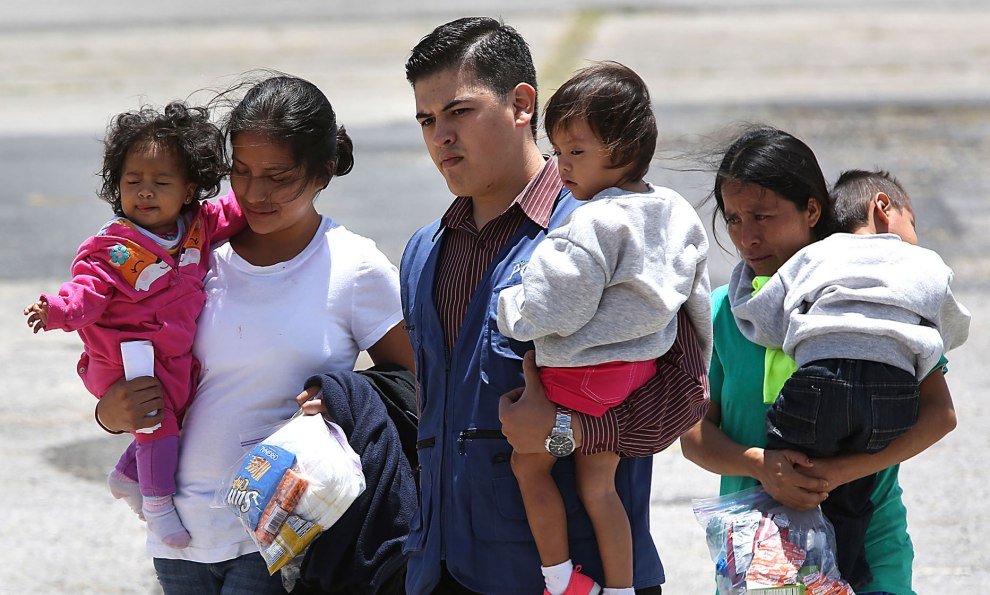 About a dozen Central American immigrants, mostly women with infants in tow, sort through crates of onions, yams, bread, and canned corn in a downtown parking lot in Oakland, California. Many of them are from Guatemala, including several wearing traditional Mayan blouses and skirts. They’ve gathered at this mobile food pantry because they’re hungry, but they’re also worried: The Trump administration’s immigration crackdown has them reconsidering whether accessing social services like these could put them at greater risk of being deported.

“All the people I know are scared,” says a woman holding her eight-month-old son. Some of her friends and relatives are too frightened to come to public pickup sites like this one. “Now,” she adds, “they do not have enough food.”

“All the people I know are scared. Now they do not have enough food.”

In late January, the Washington Post obtained a leaked draft executive order suggesting that the Trump administration would target noncitizen immigrants who use social services and create standards to determine “whether an alien is deportable…for having become a public charge within five years of entry.” Currently, asylum seekers and green-card holders can apply for food assistance via the Supplemental Nutrition Assistance Program (SNAP, formerly known as food stamps); undocumented immigrants cannot. Still, even though Trump has not signed the executive order, advocates say many authorized immigrants have preemptively canceled food benefits like SNAP—and fear that it’s part of a larger retreat to avoid interacting with federal immigration officials.

The Alameda County Community Food Bank, one of the largest food banks in the San Francisco Bay Area, recently sent out a mailer to nearly 100,000 households that it had determined were eligible for food stamps. The response rate was about a quarter of that in previous years. A food bank spokesman says they had heard similar reports from other facilities; the ACCFB estimates that the refusal of these benefits has resulted in a loss of $361,972 to the local economy, since the money from food stamps isn’t being spent.

There were nearly 4 million US citizen children receiving SNAP benefits in 2015 while living with noncitizen adults.

Last week, The Atlantic reported on a similar phenomenon in New York, writing that 17 of the 20 organizations they contacted reported that eligible immigrant families were refusing services. Jalil Isa of Food and Nutrition Service (FNS), a branch of the US Department of Agriculture, explains that it’s too soon to understand the national trends of immigrants using SNAP or the supplemental nutrition program for women, infants, and children (known as WIC) because the agency does not yet have data since the beginning of Trump’s presidency.

Jacqueline Portillo, a senior coordinator at the Oakland-based East Bay Agency for Children, says she’s most concerned about immigrant kids, particularly those in mixed-status families. According to the most recent report by FNS, there were nearly 4 million US citizen children receiving SNAP benefits in 2015 while living with noncitizen adults. Now, because of their parents’ fears of deportation, many of those children could go without those benefits.

And then there’s the unaccompanied child migrants who came as part of the so-called surge from Central America in the past several years. In a multi-use trailer where the East Bay Agency for Children has its family resource offices, I spoke with two brothers—one 19, the other 16—who separately fled gang violence in Guatemala. Neither speaks English; the older brother, who was granted asylum, works as a prep cook to support the younger one, who attends a nearby high school and whose asylum case is still pending.

Refugees and asylum grantees are eligible for food stamps, but the older brother has refused to apply because he is afraid of being deported. Portillo tries to persuade him to take the benefits, but he shakes his head firmly no. “I’m scared to apply,” he says in Spanish. He quietly explains that it is important that he not do anything to compromise his status, or his brother’s case: In Guatemala, he tells her, “a lot of people try to kill us.”