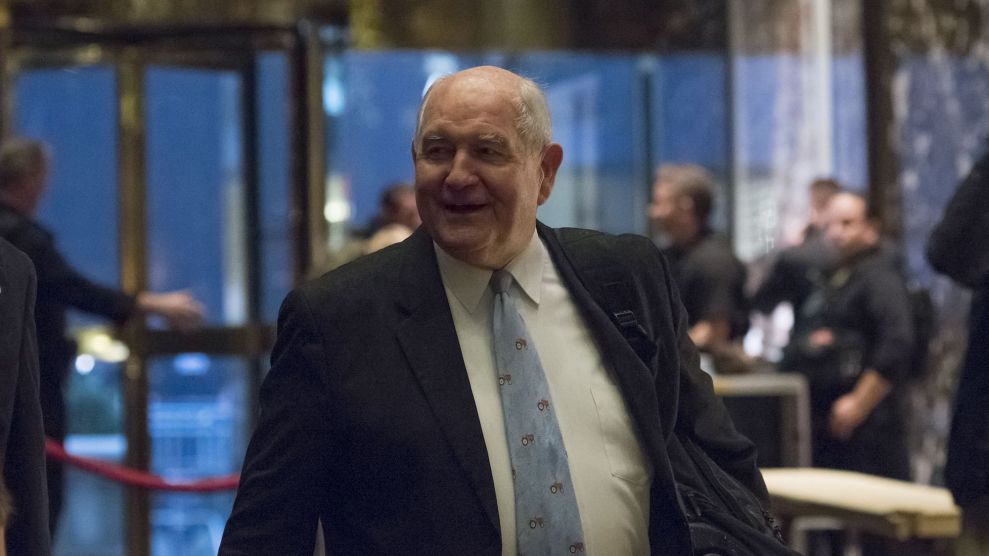 Sonny Perdue, nominee for secretary of the USDA, moves through the revolving door at Trump Tower in November 2016. <a href="http://www.apimages.com/metadata/Index/Donald-Trump-transition-meetings-New-York-USA-/fc85ee2f472f4c118096683aa34e4d5d/9/0">Rex Features</a>/AP Images

UPDATE (3-24-2017): Members of the Senate Agriculture Committee didn’t trouble Perdue with the knotty questions below, reports Politico’s Jason Huffman. “Sonny Perdue sailed through his Senate Agriculture Committee confirmation hearing on Thursday, and it sounds like he’s on a fast track to be cleared by the upper chamber,” Huffman writes. “To say lawmakers were chummy with Perdue during his two-and-a-half hour hearing on Thursday may be an understatement. Just tally up his invitations to go hunting, visit various ag states or attend college football games, for example.” No word yet on when the Senate will vote on Perdue.

It has been a long time coming: first a drawn-out and chaotic search process, then a leisurely seven-week delay to file paperwork. On Thursday morning, President Donald Trump’s nominee to lead the US Department of Agriculture, former Georgia Gov. Sonny Perdue, will finally get his confirmation hearing before the Senate Agriculture Committee.

Here are some questions I’d ask, if I were a senator on the committee:

“You mocked the idea that ever-more volatile weather is related to climate change, dismissing it as ‘ridiculous and so obviously disconnected from reality.'”

• Over the past decade, floods, droughts, and wildfires have roiled US agriculture—and the US Environmental Protection Agency and the National Climate Assessment predict those events to increase in frequency and severity as the climate warms.

Yet in a 2014 National Review op-ed, you mocked the idea that ever-more volatile weather is related to climate change, dismissing it as “ridiculous and so obviously disconnected from reality.” Now that you’re poised to take over the USDA, do you accept the scientific consensus around climate change? What policies are necessary to help US farmers adapt?

• Back in 2014, the USDA finalized a plan to essentially privatize inspection of the kill line at chicken slaughterhouses, replacing USDA inspectors with company employees. As part of the plan, the agency had for years hotly promoted a proposal to speed up the kill line. The chicken industry rallied around the proposal, in part because a faster line would cut production costs by $256 million per year, according to a USDA estimate. Worker-safety advocates successfully pressured the Obama USDA to scrap the proposed speedup, because workers were already sustaining high repetitive-motion injury rates at the status-quo speed. Workers, meanwhile, complain that the kill lines are so frantic that they struggle even to get bathroom breaks.

As governor of Georgia, you presided over the nation’s number-one chicken-producing state, and accepted $21,250 in campaign donations from chicken giant Gold Kist. If industry pressure mounts for a speed up, how will you react?

• In its waning days, the Obama USDA released a set of new rules (more here) designed to rein in what it called the “market power” large poultry companies wield over their farmers who supply them birds. The rules, known as GIPSA, are necessary, the USDA claimed, because the industry’s current relationship with farmers involves “treating them unfairly, suppressing how much they are paid, or pitting them against each other.”

The USDA has been required to release a version of the GIPSA rules since being charged to do so by the 2008 farm bill, but GOP stalwarts in the US House have been pushing back ever since, using legislative chicanery to block them. Farmers’ rights groups hailed the move as long overdue; the industry squawked, declaring (falsely) that leveling the playing field with farmers would “raise the price of meat/poultry” for consumers.

“While governor, you declined to place your businesses in a blind trust.”

Scheduled to go into effect in February, the Trump administration has reopened them for public comment, and delayed a final decision until April 22. Where do you stand on the power differential between farmers and Big Poultry?

• The USDA administers several crucial anti-hunger programs, including school lunches, after-school food initiatives, and the Supplemental Nutrition Assistance Program (SNAP), formerly known as food stamps. Speaker of the House Paul Ryan is famously contemptuous of the school-lunch program and has repeatedly pushed for slashing SNAP. Last week, a White House official denounced after-school food programs for low-income kids as money poorly spent. What is your view on food aid to the poor, and as USDA secretary, would you defend these programs against budget cuts?

• You own several agribusiness firms and sit on the boards of two industry trade groups. A recent report from Politico found “more than a dozen instances” when, as governor of Georgia, you “gave positions to business associates and campaign donors, and other occasions when he rewarded his state staff with opportunities in his agriculture and shipping empire” after leaving office. While governor, you declined to place your businesses in a blind trust. Recently, you pledged to do just that before taking the helm at USDA. Why the change of heart? And can friends and cronies expect more favors if you take over the USDA?