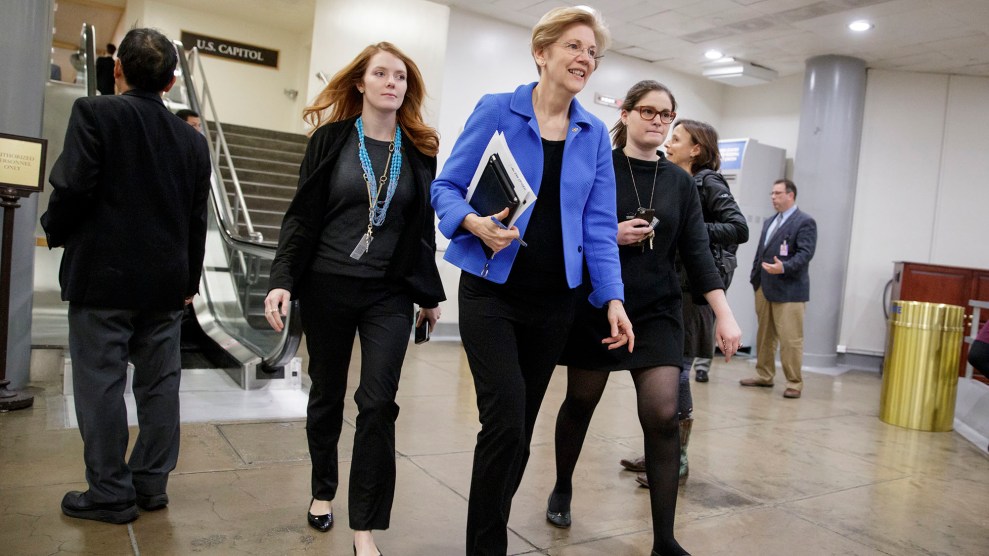 On February 7, Sen. Elizabeth Warren (D-Mass.) was reading a letter critical of Sen. Jeff Sessions (R-Ala.), then the nominee for attorney general, when the Senate’s top Republican forced her to stop. Invoking an obscure Senate rule against disparaging colleagues, Senate Majority Leader Mitch McConnell (R-Ky.) had Warren ejected from the Senate chamber. Minutes later, she appeared on MSNBC and #letlizspeak began trending on Twitter. Warren then read the full letter—which had been written by Coretta Scott King in 1986—on Facebook Live. By the next morning, the Facebook video had been viewed more than 5 million times.

McConnell, known as one of the savviest political operators in Washington, appeared to have made an uncharacteristic mistake. Rather than silence Warren’s message, he made it go viral. McConnell defended his decision that night by stating that he had warned Warren but “nevertheless, she persisted”—a phrase Warren’s supporters have now emblazoned on apparel, mugs, and their bodies as tattoos.

But there were some who theorized that McConnell was, as ever, two steps ahead. Reporters and pundits debated whether McConnell had intentionally elevated Warren’s public profile because he wants the Democratic Party to be defined by one of its most liberal members. Not long after, a report in Politico corroborated this theory: Republicans have decided to use Warren as a sort of boogeyman ahead of the 2018 midterm elections, when 10 Democratic senators are up for reelection in states Donald Trump won. By late February, the committee tasked with electing Republicans to the Senate launched digital ads attacking vulnerable Democrats by stating how often they had voted with Warren.

At a time of division within their party, Republicans believe the best strategy is to unite against a common foe. Without Barack Obama in the White House, they need someone else to run against in 2018. Warren, a household name and an unapologetic liberal, is an easy choice. Ford O’Connell, a Republican strategist in Washington, DC, says going after Warren is part of the Republican playbook for 2020, as well. “Always define your opponent before your opponent can define you,” he says. And taking on Warren now, O’Connell suggests, will hurt her chances if she becomes her party’s presidential nominee in 2020.

What’s strange about Warren is that both parties seem to agree that she should be in the spotlight.

A law professor who studied bankruptcy and debt, Warren arrived on the political scene in the wake of the 2008 financial crisis. She pushed the federal government to set up an agency to protect ordinary Americans from unfair practices by Wall Street and other industries—an effort that led to the creation of the Consumer Financial Protection Bureau. In the Senate, she voted down Obama’s nominees whom she considered too cozy with Wall Street. She has championed issues like student loan reform and raising the minimum wage that Democrats believe will appeal to voters charmed by Trump, who has already endangered his populist reputation by filling his Cabinet with mega-rich Wall Street alumni.

What’s strange about Warren is that both parties seem to agree that she should be in the spotlight. Democrats say they welcome Republicans’ decision to elevate one of their most populist voices. Ultimately, they believe Republicans’ strategy will backfire because Warren’s reputation and message resonate across the country. “Elizabeth Warren was Bernie Sanders before Bernie Sanders,” says Mary Anne Marsh, a Democratic strategist in Massachusetts. “When you look at her first race here [for the Senate in 2012], she tapped into much of the sort of populist economic anxiety that a lot of people had here in Massachusetts. That’s not going to go away.”

And if red-state Democrats are afraid of Warren’s progressive reputation, they don’t show it. Warren has visited Republican-leaning states on behalf of Democratic candidates, from Kentucky (where she helped McConnell’s challenger, Alison Lundergan Grimes, in 2014) to Ohio (where she campaigned for Hillary Clinton last year).

One of the best examples is her work on behalf of Jason Kander, who ran a surprisingly close race last year for the US Senate in Missouri against incumbent Republican Roy Blunt. In 2018, Missouri’s Democratic senator, Claire McCaskill, is up for reelection, and the Warren-as-boogeyman strategy could be tested there. As early as 2015, Warren sent out emails on behalf of Kander. She held fundraisers and flew to Missouri for a last-minute rally. “Sen. Warren’s profile being raised is not a bad thing for the party at all,” says Abe Rakov, Kander’s campaign manager. “I think she’s a very, very good messenger for the party, and I think it showed in Missouri.”

Of course, Kander lost, as did Lundergan Grimes in Kentucky and Clinton in Ohio. But Warren consistently drew some of the biggest crowds, and Rakov says her presence was only a benefit to the campaign. “After she was here, we saw our volunteer numbers go up, we saw our fundraising go up,” he recalls. Over the course the election, he says, Kander’s campaign had built up “a lot of evidence that it was sort of a Republican myth that she would cause us problems.” (Her fundraising prowess was evident after McConnell kicked her off the Senate floor, when a Democratic Congressional Campaign Committee email about the incident helped the group shatter previous fundraising records.)

But if Republicans are able to cast her as a typical liberal zealot rather than a populist messenger, their strategy of running against her makes sense. “She has been very polarizing along party lines, even in Massachusetts,” says Steve Koczela, a pollster in Boston. He agrees that Warren’s message probably resonates with some Trump voters on a policy level but says that is unlikely to endear her to them. “Logic doesn’t always apply when evaluating partisan actors these days,” he says. “It’s more, do people see you as with them or with the other team?”

Simply raising Warren’s profile may not be enough to turn white working-class voters—whose support in Rust Belt states was key to Trump’s electoral victory—against her and the Democratic Party. Roland “Butch” Taylor, a retired welder and pipefitter in northeast Ohio, supported Clinton in 2016, but many of his peers and fellow union members backed Trump. When asked about Warren, he immediately brought up the episode on the Senate floor. “When they gaveled her on the Senate floor, what did she do?” he said. “She didn’t go back in the back and pout. She went right to the cameras and started her own speech in front of American people.” Rather than show her as an out-of-touch liberal, Taylor said, the episode convinced him “that’s the kind of leader you need.” He thinks Clinton might have done better in the Ohio Rust Belt if Warren had been on the ticket with her. “She would make a great candidate for the party for 2020,” he said.

That’s exactly what Democrats are counting on—that Warren’s persona and message will appeal beyond the party’s progressive base and coastal and urban strongholds. But O’Connell says he isn’t worried about Warren’s populist message undercutting Republicans. Warren’s support for environmental regulations, he believes, provides a wedge issue Republicans can use to hold onto working-class white voters who supported Trump in November. “What you’re seeing here is a potential collision between environmentalists, which Warren loves, and big labor,” he says. Taylor, whose livelihood depended on the oil and gas industries in Ohio, would be a good target of that strategy. He even qualified his praise for Warren by stressing that her appeal is contingent on her support for energy-sector jobs.

Ultimately, Democrats and Republicans simply disagree on the extent and geography of Warren’s popularity. Democrats think she can attract support across the country and that her ability to fire up the base is an asset that Clinton lacked in 2016. Republicans believe her appeal is limited to her base. “The one thing I think that Republicans are betting on, should she actually become the Democratic presidential nominee,” O’Connell says, “is that she isn’t going to be able to come up with a message that is unifying for all 50 states.”