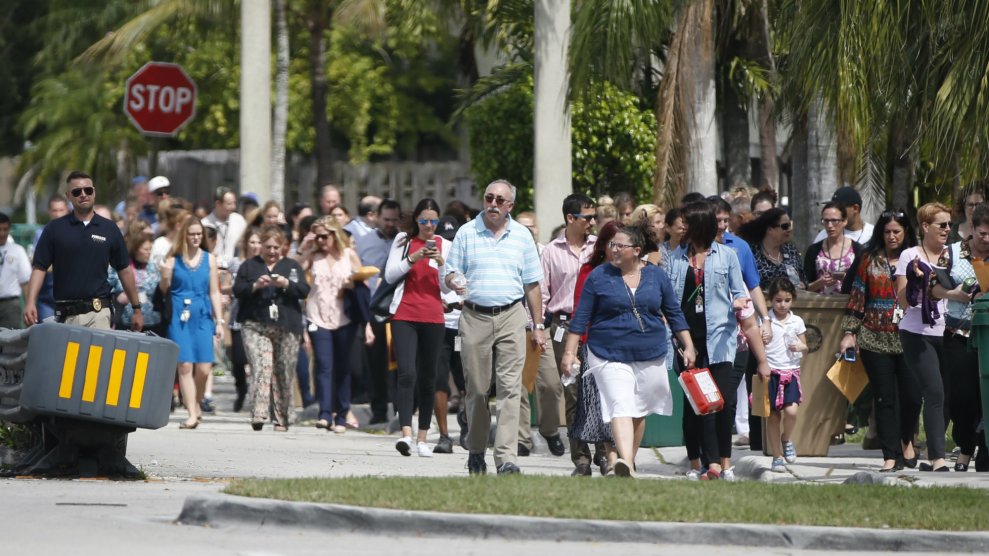 People returning to a JCC evacuated in Florida in late February.Wilfredo Lee/AP

The incidents mark the sixth wave of such threats since early January, bringing the total to around 100, according to Mark Potok, an expert on extremism and hate crimes at the Southern Poverty Law Center. Headstones have also been vandalized in at least three Jewish cemeteries around the country. On Friday, a troubled ex-journalist was arrested in connection with threats against eight Jewish community centers, although he appeared to be a copycat and federal law enforcement officials told the New York Times that he was not believed to be behind most of the threats.

Potok sees a disturbing new trend. “I’ve been doing this work for almost 20 years now and I haven’t seen anything like this in terms of a sustained campaign of bomb threats,” he says. “The cemetery desecrations—that’s more of the kind of thing we see in Europe, in countries like Poland and Estonia, where there’s a lot of residual anti-Semitism,” he added.

The number of active hate groups in the US rose to a near-historic high of 917 in 2016, according to a tally by the Southern Poverty Law Center. Among hate crimes motivated by religious bias, anti-Semitic attacks continue to be the most common: There were 664 such attacks in 2015, according to the most recent FBI data.