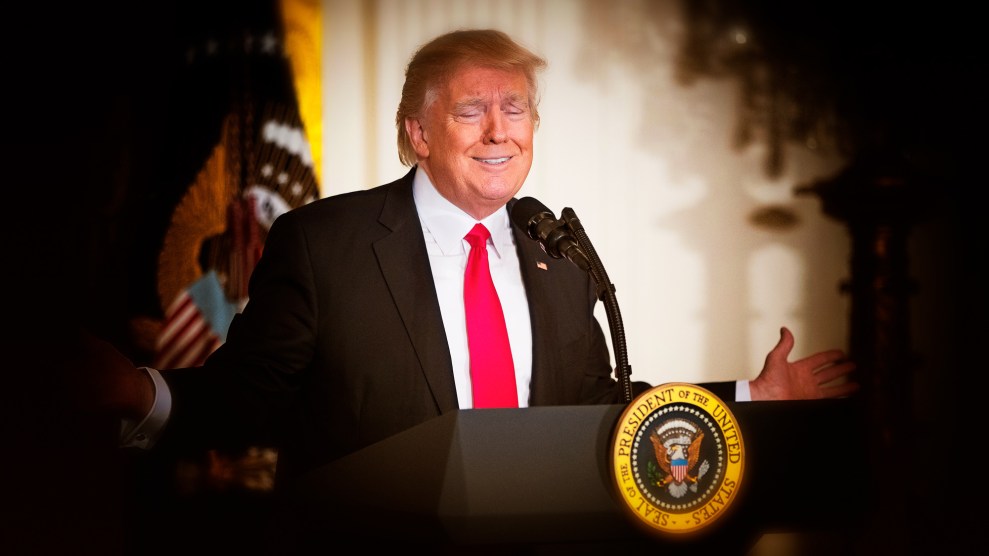 President Donald Trump intensified his attack on the media in a wild press conference Thursday, once again characterizing the press as “dishonest” in response to recent reports that have depicted an administration increasingly in turmoil. He also defended Michael Flynn, who resigned Monday as national security adviser, amid mounting evidence that he misled administration officials about his phone calls to the Russian ambassador.

“If anything, he did something right,” Trump said of Flynn. While he denied ordering Flynn to discuss easing American sanctions against Russia, he said that doing so would have been acceptable.

“Mike was doing his job, he was calling countries and his counterparts,” he said. “So it certainly would have been okay with me if he did it. I didn’t direct him, but I would have directed him because that’s his job.”

Asked repeatedly if his campaign aides were in contact with Russian officials during the 2016 election campaign, Trump dodged the questions, saying only, “I had nothing to do with it.”

Trump began the press conference by announcing his second pick for labor secretary, Alexander Acosta, following Andrew Puzder’s decision to withdraw his nomination yesterday. Trump dedicated only a brief moment to discussing Acosta before he turned to his main message for the afternoon: his grievances with the press. “Many of our nation’s reporters and folks will not tell you the truth,” Trump said in his attacks against the media and the ongoing leaks. “We have to find out what’s going on because the press is honestly out of control.”

Trump complained of the “mess” he inherited from the past administration and disputed reports that the White House is in disarray. “It is the exact opposite,” he said. “This administration is running like a fine-tuned machine.”

Trump went on to complain about how he has been covered by the media, predicating that:

Watch the whole press conference below: