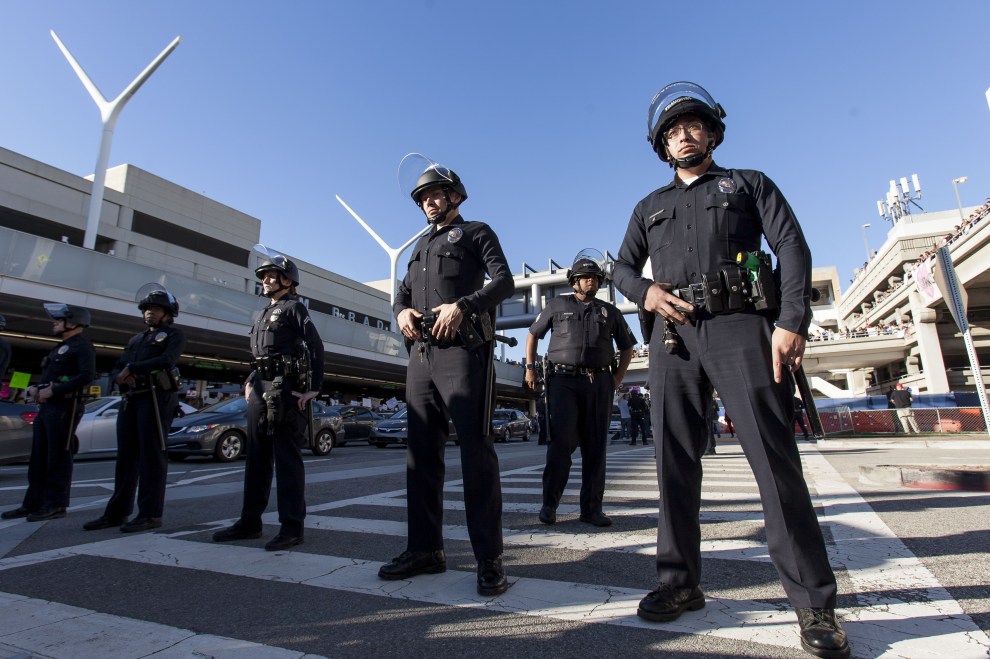 Police officers watch as protesters speak out against a ''Muslim Ban'' that prevents travel into the U.S. from seven majority Muslim nations.Mariel Calloway/ZUMA Wire

The Trump administration wants to revamp and rename a US government program designed to counter all violent ideologies so that it focuses solely on Islamist extremism, five people briefed on the matter told Reuters.

Such a change would reflect Trump’s election campaign rhetoric and criticism of former President Barack Obama for being weak in the fight against Islamic State and for refusing to use the phrase “radical Islam” in describing it. Islamic State has claimed responsibility for attacks on civilians in several countries.

The CVE program aims to deter groups or potential lone attackers through community partnerships and educational programs or counter-messaging campaigns in cooperation with companies such as Google and Facebook.

Some proponents of the program fear that rebranding it could make it more difficult for the government to work with Muslims already hesitant to trust the new administration, particularly after Trump issued an executive order last Friday temporarily blocking travel to the United States from seven predominantly Muslim countries.

Still, the CVE program, which focuses on US residents and is separate from a military effort to fight extremism online, has been criticized even by some supporters as ineffective.

A source who has worked closely with the Department of Homeland Security (DHS) on the program said Trump transition team members first met with a CVE task force in December and floated the idea of changing the name and focus.

In a meeting last Thursday attended by senior staff for DHS Secretary John Kelly, government employees were asked to defend why they chose certain community organizations as recipients of CVE program grants, said the source, who requested anonymity because of the sensitive nature of the discussions.

Although CVE funding has been appropriated by Congress and the grant recipients were notified in the final days of the Obama administration, the money still may not go out the door, the source said, adding that Kelly is reviewing the matter.

Some Republicans in Congress have long assailed the program as politically correct and ineffective, asserting that singling out and using the term “radical Islam” as the trigger for many violent attacks would help focus deterrence efforts.

Others counter that branding the problem as “radical Islam” would only serve to alienate more than three million Americans who practice Islam peacefully.

Many community groups, meanwhile, had already been cautious about the program, partly over concerns that it could double as a surveillance tool for law enforcement.

Hoda Hawa, director of policy for the Muslim Public Affairs Council, said she was told last week by people within DHS that there was a push to refocus the CVE effort from tackling all violent ideology to only Islamist extremism.

“That is concerning for us because they are targeting a faith group and casting it under a net of suspicion,” she said.

Another source familiar with the matter was told last week by a DHS official that a name change would take place. Three other sources, speaking on condition of anonymity, said such plans had been discussed but were unable to attest whether they had been finalized.

The Obama administration sought to foster relationships with community groups to engage them in the counter terrorism effort. In 2016, Congress appropriated $10 million in grants for CVE efforts and DHS awarded the first round of grants on Jan. 13, a week before Trump was inaugurated.

Among those approved were local governments, city police departments, universities and non-profit organizations. In addition to organizations dedicated to combating Islamic State’s recruitment in the United States, grants also went to Life After Hate, which rehabilitates former neo-Nazis and other domestic extremists.

Just in the past two years, authorities blamed radical and violent ideologies as the motives for a white supremacist’s shooting rampage inside a historic African-American church in Charleston, South Carolina, and Islamist militants for shootings and bombings in California, Florida and New York.

One grant recipient, Leaders Advancing & Helping Communities, a Michigan-based group led by Lebanese-Americans, has declined a $500,000 DHS grant it had sought, according to an email the group sent that was seen by Reuters. A representative for the group confirmed the grant had been rejected but declined further comment.

“Given the current political climate and cause for concern, LAHC has chosen to decline the award,” said the email, which was sent last Thursday, a day before Trump issued his immigration order, which was condemned at home and abroad as discriminating against Muslims while the White House said it was to “to protect the American people from terrorist attacks by foreign nationals.”