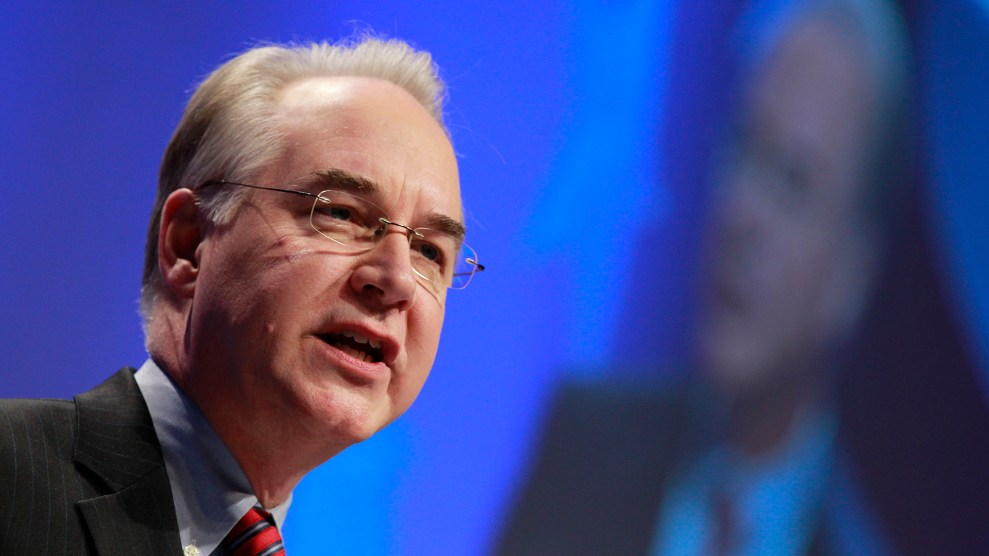 During Tom Price’s confirmation hearing last week, Sen. Orrin Hatch quizzed him on his commitment to eradicating Medicare fraud, which the Utah Republican noted had cost the government billions of dollars. If confirmed to head the US Department of Health and Human Services, Price, a Republican congressman from Georgia, will oversee the agency’s efforts to protect government-run health care programs from scammers. “I think they’re a minority,” Price replied, “but there’s some bad actors out there…If we were to focus on those individuals that were the bad actors specifically, then I think we could do a much better job of not just identifying the fraud that exists out there, but ending that fraud.”

Those bad actors aren’t as rare as Price suggested. In fact, a company closely linked to his medical practice was ensnared in a multimillion-dollar Medicare fraud case. In 1999, Price became a partner in Resurgens PC, what is now Georgia’s largest orthopedic practice, where he also served as a board member until 2004, when he ran for Congress. Resurgens doctors performed surgeries at an outpatient facility that had been incorporated as a separate corporate entity, Resurgens Surgery Center LLC. In 2005, the surgery center agreed to repay $2.5 million to the federal government to settle allegations that it had fraudulently billed Medicare and Medicaid and violated a federal anti-kickback law.

Price was not implicated in the case—the wrongdoing allegedly occurred between 1993 and 1997, before he joined the practice—and he didn’t hold a direct financial stake in Resurgens Surgery Center. But the payout by Resurgens Surgery Center highlights one of the conflicts he may face if his nomination is approved. As HHS secretary, he will be charged with helping enforce the very laws the Justice Department accused Resurgens Surgery Center of violating. A spokeswoman for Price did not respond to questions from Mother Jones.

There are other reasons to question how aggressively Price will go after Medicare scammers. He was a longtime member of a conservative medical organization, the Association of American Physicians and Surgeons, that has strongly opposed fraud investigations by HHS, claiming that “misguided enforcement actions” target honest physicians.

“It’s worth wondering how tough [Price is] going to be on these issues,” says Marc Smolonsky, a former associate deputy secretary at HHS during the Obama administration and an expert on health care fraud. “I’m not saying he’s not going to be tough, but it’s certainly something to ask.” He notes that Congress earmarks almost $1.5 billion a year for HHS to probe fraud. “Most of that is under his purview.”

The case against Resurgens Surgery Center began in 2001, when a whistleblower named Robert Allen filed a federal False Claims Act lawsuit against the company in a Georgia federal court. Between 1995 and 1997, Allen had been a consultant and then an administrator for a group of anesthesiologists who worked closely with Resurgens Surgery Center. Allen alleged that the anesthesiologists had colluded with Resurgens Surgery Center to illegally collect “facility fees” from Medicare and Medicaid for services they performed in a Resurgens facility. The government health care programs allows certain health care providers, such as hospitals or outpatient surgery centers, to bill extra fees to help cover the overhead of running the facility on top of those charged for medical care.

Allen claimed this arrangement began in 1993 and continued after he left the anesthesiologists’ practice in 1997. And he alleged that he told the doctors their setup was illegal but they declined to put an end to it.

The Department of Justice can intervene in private whistleblower suits if it believes serious misconduct has occurred. In 2002, it did so in Allen’s case. In 2004, the anesthesiologists settled for $1.3 million. The following year, shortly after Price was elected to Congress, Resurgens Surgery Center also settled, agreeing to repay $2.5 million in fees it had billed the government. Neither Resurgens Surgery Center nor the anesthesiologists admitted to wrongdoing in the settlement.

Doug Lundy, co-president of Resurgens PC, did not respond to requests for comment. But after the 2005 settlement was announced, Charles C. Murphy, an attorney for Resurgens Surgery Center, told a local Georgia newspaper that the company made a “business decision” to settle the case. “The Resurgens doctors believed they had done nothing improper,” he said. “Nonetheless, the case was becoming a significant distraction, and Resurgens Surgery Center believes the more prudent course was to put the matter behind it.”

Since Price entered Congress, his former Resurgens colleagues and other company employees have been major backers of his campaigns, donating nearly $225,000 since 2004. In July 2015, Lundy hosted a fundraiser for Price. After Price was nominated to HHS, Resurgens issued a statement congratulating Price. (The statement was subsequently removed from the company’s website.) A full vote by the Senate on his nomination is expected next week.

The Obama administration made a big push to crack down on Medicare billing fraud, which is believed to sap nearly $100 billion a year from Medicare and Medicaid. It aggressively rooted out crooked doctors and hospitals that were bilking the system, and it included tougher anti-fraud rules in the Affordable Care Act. In June, HHS and the Department of Justice spearheaded the largest Medicare fraud takedown in history. The investigation resulted in charges against more than 300 people and involved nearly $1 billion in fraudulent billing. Sixty-one of the people charged were doctors.

Will a Secretary Price continue to pursue this kind of aggressive enforcement? Dr. Robert Berenson, a fellow at the Urban Institute and a former member of the government’s Medicare Payment Advisory Commission, is skeptical. “He clearly thinks doctors should be left alone,” Berenson says. “[Billing fraud] is the kind of thing that happens when they are left alone.”