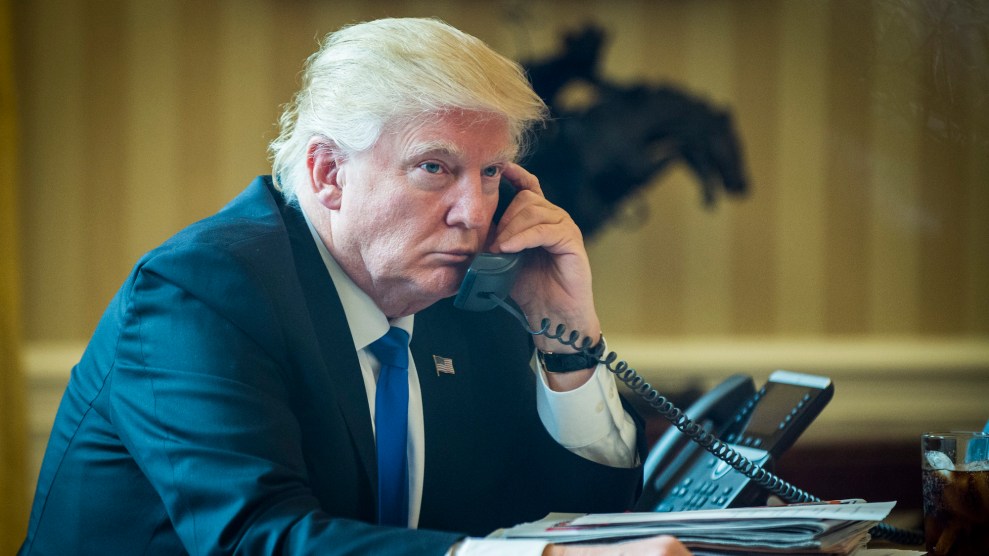 The biggest election-related scandal since Watergate occurred last year, and it has largely disappeared from the political-media landscape of Washington.

According to the consensus assessment of US intelligence agencies, Russian intelligence, under the orders of Vladimir Putin, mounted an extensive operation to influence the 2016 campaign to benefit Donald Trump. This was a widespread covert campaign that included hacking Democratic targets and publishing swiped emails via WikiLeaks. And it achieved its objectives. But the nation’s capital remains under-outraged by this subversion. The congressional intelligence committees announced last month that they will investigate the Russian hacking and also examine whether there were any improper contacts between the Trump camp and Russia during the campaign. (A series of memos attributed to a former British counterintelligence officer included allegations of collusion between the Trump campaign and Russia.) Yet these behind-closed-doors inquiries have generated minimum media notice, and, overall, there has not been much outcry.

Certainly, every once in a while, a Democratic legislator or one of the few Republican officials who have bothered to express any disgust at the Moscow meddling (namely Sens. John McCain, Lindsey Graham, and Marco Rubio) will pipe up. House Democratic leader Nancy Pelosi days ago called on the FBI to investigate Trump’s “financial, personal and political connections to Russia” to determine “the relationship between Putin, whom he admires, and Donald Trump.” Sen. Chris Murphy (D-Conn.), responding to Trump’s comparison of the United States to Putin’s repressive regime, said on CNN, “What is this strange relationship between Putin and Trump? And is there something that the Russians have on him that is causing him to say these really bizarre things on an almost daily basis?” A few weeks ago, Graham told me he wanted an investigation of how the FBI has handled intelligence it supposedly has gathered on ties between Trump insiders and Russia. And last month, Sen. Ron Wyden (D-Ore.) pushed FBI Director James Comey at a public hearing to release this information. Yet there has been no drumbeat of sound bites, tweets, or headlines. In recent days, the story has gone mostly dark.

Look at the White House daily press briefings. Since Trump entered office, there has been far more back-and-forth between reporters and Press Secretary Sean Spicer on the inauguration crowd size, Trump’s bathrobe, and Melissa McCarthy than the Russia scandal. Trump associates are perhaps being questioned by House and Senate intelligence committee investigators, and the FBI, which according to news reports has looked at possible ties between Trump advisers and Russia, might also still be on the case. Yet this has not been a top priority for White House reporters.

Here are two questions that could have been posed to Spicer at his first briefing:

* Have any past or present Trump associates, inside or outside his administration, been contacted or questioned by the intelligence committees, the FBI, or any other government body investigating the Russian hacking or interactions between Trump’s circle and Russia?

* During the presidential campaign, did Trump or any of his political or business associates have any interactions with Russian officials or Russian intermediaries?

That did not happen. At Spicer’s first briefing, Anita Kumar of McClatchy did ask, “Has the president spoken to any of the intelligence agencies about the investigation into the Russian connections? And will he allow that to go on?” Spicer replied, “I don’t believe he has spoken to anyone specifically about that and I don’t know that. He has not made any indication that he would stop an investigation of any sort.” This was an important question that warranted a response that was less equivocal—and reporters could have pointed that out.

This quietude is good news for Putin—and reason for him to think he could get away with such an operation again.

At the next day’s briefing, on January 24, Margaret Talev of Bloomberg asked Spicer about reports that Comey was remaining in his post and whether Comey and Trump had discussed “the Russia investigation and the parameters of that.” Spicer responded, “I don’t have anything on that.” Spicer’s nonresponse didn’t prompt any news.

In the fortnight since, the key twin questions—what is Trump doing regarding the Russian hacking, and are Trump associates being investigated for interactions with Russia?—have not been regular items on the agenda during the White House briefings. When Trump spoke to Putin by phone on January 28, subsequent media reports noted that the call focused on how relations could be improved. There was no public indication that Trump had said anything to Putin about the Russian intervention in the US election. And in the following days, White House reporters did not ask Spicer about this apparent omission.

There have been plenty of significant topics for journalists to press Spicer and the administration on—the travel ban on refugees and immigrants from Muslim-majority countries, Trump’s plan to dump Obamacare, various nominations and a Supreme Court pick, Trump’s fact-free charge of widespread voter fraud, Steve Bannon’s participation on the National Security Council, Trump’s contentious calls with foreign leaders, the president’s erratic behavior, and much more. But the lack of media attention to the Russia story, at the White House briefings and beyond, is curious. It is true that the intelligence committee probes are being conducted secretly, and there are no public hearings or actions to cover. (Republican leaders on Capitol Hill, hoping to confine this scandal, succeeded in preventing the creation of a special committee or an independent commission to probe this affair—either of which would have probably sparked more coverage than the highly secretive intelligence committees.) Still, in the past, pundits, politicians, and reporters in Washington have not been reluctant to go all-out in covering and commenting upon a controversy subjected to private investigation.

In this instance, the president’s own people may be under investigation, and Trump has demonstrated no interest in holding Putin accountable for messing with US elections in what may be considered an act of covert warfare. Still, there has been no loud demand from the DC media (or most of the GOP) for answers and explanations. This quietude is good news for Putin—and reason for him to think he could get away with such an operation again.