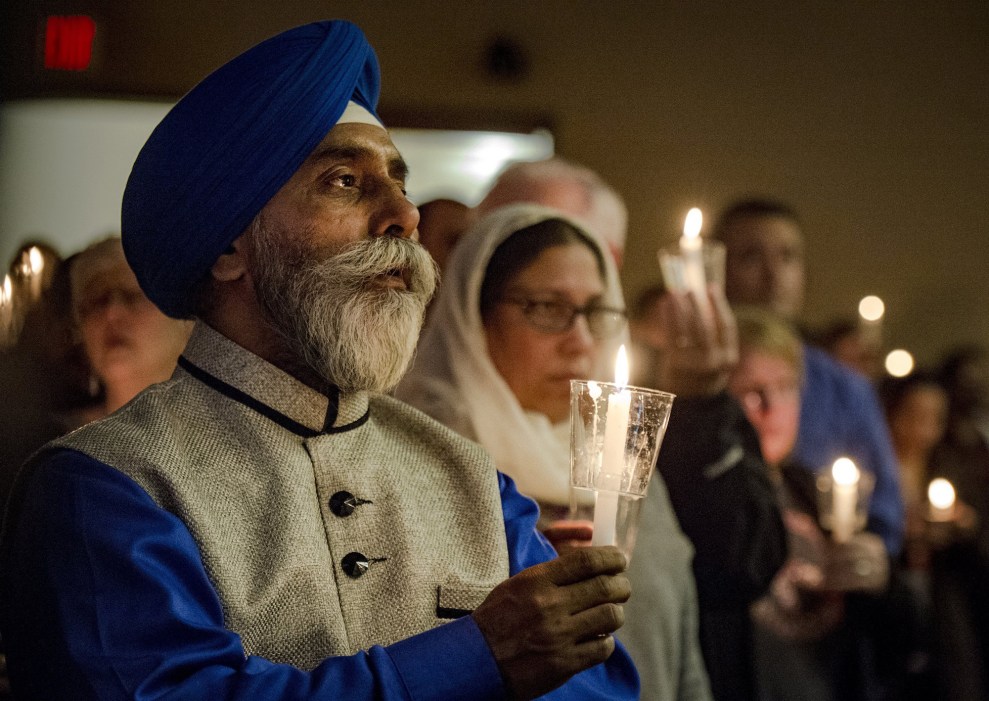 Hundreds of people participated in a prayer vigil on Sunday, Feb. 26, 2017 at the Ball Conference Center in Olathe, Kansas.Allison Long/ZUMA

Last Wednesday, a man walked into an Olathe, Kansas, bar where he allegedly shouted racial slurs, including “get out of my country,” at two Indian men, before opening fire and killing Srinivas Kuchibholta and injuring his colleague, Alok Madasani. The two men were engineers working at the GPS-maker Garmin. The suspect, who is being charged with first-degree murder and two counts of attempted murder, then fled to an Applebee’s 70 miles away, where he reportedly told a bartender that he believed he had just shot two Iranian people.

“I need an answer from the government,” the widow of Kuchibholta, Sunayana Dumala, asked on Friday. “What are they going to do to stop this hate crime?”

Despite her pleas, President Donald Trump has yet to utter a single word condemning the attack. Nor has he offered reassurance to the public that his administration stands against the hate crimes that have surged since he won the election. Instead, his administration initially called it “absurd” to connect the Olathe shooting to Trump’s anti-Muslim executive orders and rhetoric. White House press secretary Sean Spicer later likened the shootings to the “equally disturbing” recent wave of anti-Semitic attacks.

But anti-defamation groups and public figures, including Hillary Clinton, are demanding the president “step up” and do more to combat the wave of racist attacks many believe is a direct consequence of Trump’s anti-immigration policies and inflammatory campaign rhetoric. On Monday, former president George W. Bush directed a veiled criticism at Trump, telling People magazine that he did not approve of racism. “I do not like name-calling and I don’t like people feeling alienated,” he said.

With threats & hate crimes on rise, we shouldn’t have to tell @POTUS to do his part. He must step up & speak out.https://t.co/QKKyXyuqNM

In an editorial on Monday, the Kansas City Star offered its own criticism of Trump’s continued silence about the Olathe shooting and called on him  to use his first presidential address to Congress on Tuesday to forcefully condemn racially motivated acts.

“Surely the White House team could have cobbled a statement of some sort, a response to at least address growing fears that the US is unwelcoming of immigrants, or worse, that the foreign-born need to fear for their lives here,” the editorial said. “The deadly incident in Olathe has resonated across the country and even around the globe.”

Trump issued his first comments condemning anti-Semitic attacks only last week, after a weekend marked by bomb threats and vandalism targeting Jewish community groups and cemeteries. His brief remarks on the issue did not appear to discourage many similar acts that continued the following weekend.