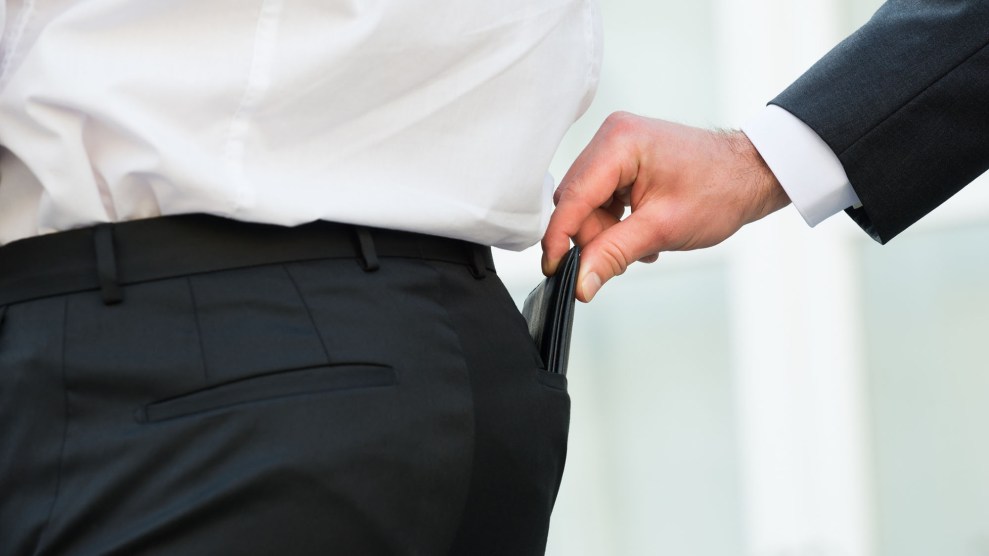 Donald Trump rolled out his latest executive action Friday afternoon, and it’s a huge handout to the financial industry at the expense of consumers. Trump ordered the Department of Labor to explore overturning—or at least weakening—a dull-sounding Obama administration regulation known as the “fiduciary rule.” And while the details of that will be up to Trump’s labor secretary, his order does at least push back the start date for the rule, which was supposed to go into effect in April. “The rule is a solution in search of a problem,” White House Press Secretary Sean Spicer said Friday.

“This is like putting only healthy food on the menu because unhealthy food tastes good but you still shouldn’t eat it because you might die younger.”

The fiduciary rule is the sort of technical-sounding tweak that doesn’t whip up a ton of attention during political campaigns, but it could have a major impact on the amount of money middle-class Americans are able to save for their retirements. The essence of the rule isn’t all that complicated. It simply requires the retirement fund managers overseeing your 401(k) or IRA to actually act in your best interest—rather than sacrificing your interests for their own personal gain.

It’s an intuitive concept, but it’s one that hasn’t always been practiced by the industry. President Barack Obama’s Labor Department spent six years writing the details of how exactly the fiduciary rule would work, publishing a finalized version last year. The department estimated that retirement accounts across the country lost a total of $17 billion per year due to investment advice that clearly isn’t in the consumer’s interest. Earlier Friday, Massachusetts Sen. Elizabeth Warren released a report detailing the rampant kickbacks that financial advisers receive when they recommend certain financial products to their clients. “It’s far too easy for an adviser to sell just one more annuity, regardless of whether it is a prudent choice for the investor, when a free vacation or an international cruise is waiting for him on the other side of the sale,” the report says. “These conflicts can result in devastating consequences for retirees.”

Trump’s directive was rolled out Thursday night by Gary Cohn, a former Goldman Sachs president who now heads Trump’s National Economic Council. Cohn offered a bizarre explanation for the move during an interview with the Wall Street Journal, arguing that the fiduciary rule limits consumers’ choices. “This is like putting only healthy food on the menu because unhealthy food tastes good but you still shouldn’t eat it because you might die younger.” Except unlike splurging on a Big Mac, where you know what you’re getting, consumers tend to be unaware when their financial adviser’s hidden conflicts of interest are siphoning away their retirement savings.

Around the time Trump officially signed the order Friday, Warren blasted him on Twitter:

After literally standing next to Wall St CEOs, @realDonaldTrump made it easier for investment advisors to cheat you out of your savings.

Trump paired his fiduciary rule memorandum with a separate order instructing various federal regulators to begin exploring how they can roll back financial rules put in place by Dodd-Frank, the 2010 Wall Street reform law enacted by congressional Democrats and Obama in the wake of the financial crisis. Much like Trump’s earlier executive order attacking Obamacare, the anti-Dodd-Frank measure doesn’t offer much in the way of specifics; rather, it appears to be intended to set a general tone for how Trump’s administration will tackle financial regulation.

Trump neatly summed up the reason for his opposition to the Obama measures during a meeting with CEOs Friday morning: Financial reform made life harder for his uber-rich friends. “Frankly I have so many people, friends of mine, that have nice businesses,” he said. “They can’t borrow money, they just can’t because the banks won’t let them borrow because of the rules and regulations in Dodd-Frank.”