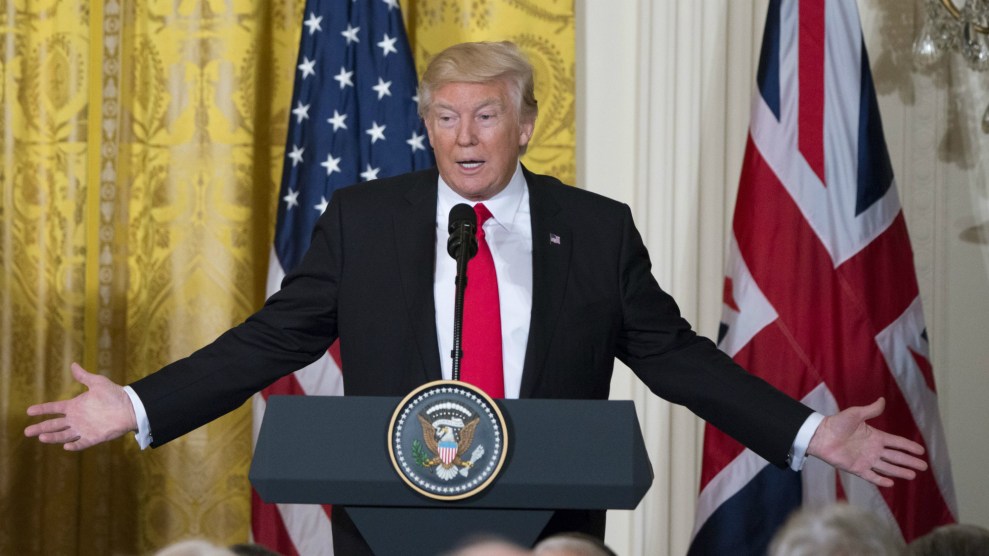 Among Donald Trump’s debts—the source of some of his most intractable conflicts of interest—is a mystery loan that Trump has not publicly explained. And this means that the president could have a secret creditor to whom he owes tens of millions of dollars.

According to Trump’s financial disclosure records and various news reports, Trump is carrying hundreds of millions of dollars in debt. These transactions could provide his creditors with leverage over the new commander-in-chief. Moreover, it would be difficult for Trump to refinance or modify the terms of his various loans without raising suspicion that he is receiving favorable treatment because of his position. (Imagine a bank gives him a good rate. Would this suggest it might receive preferential treatment from the US government Trump heads?) Because Trump has refused to release his tax returns, it’s impossible for the public to know exactly how much he owes and to whom. And Trump never kept his campaign promise to reveal all his creditors and obligations.

The financial disclosure form he filed last year did note more than a dozen loans totaling at least $713 million. But the full amount could be more. And buried in the paperwork is a puzzling debt that ethics experts say could suggest that Trump has a major creditor he has not publicly identified.

According to the disclosure, in 2012, Trump borrowed more than $50 million from a company called Chicago Unit Acquisition LLC. (The true value of the loan could be much higher; the form requires Trump only to state the range of the loan’s value, and he selected the top range, “over $50,000,000.”) Elsewhere in the same document, Trump notes that he owns this LLC. That is, he made the loan to himself. There’s nothing necessarily unusual about that.

Here’s where the situation gets odd. With Trump owning the Chicago Unit Acquisition LLC—and the LLC being owed $50 million or more by Trump—this company should be listed on Trump’s disclosure as worth at least that much, unless it has debt offsetting this amount. Yet on Trump’s latest disclosure form, Chicago Unit Acquisition is not listed at all. The disclosure rules say that any asset worth more than $1,000 must be noted. So this is the mystery: Why is this Trump-owned firm that holds a $50 million-plus note from Trump not worth anything?

Buried in the paperwork is a puzzling debt that ethics experts say could mean Trump has a major creditor he has not publicly revealed.

The answer could be that Chicago Unit Acquisition has its own debts that cancel out its value, says Kathleen Clark, a law professor at Washington University in St. Louis, who specializes in government and corporate ethics. In other words, Trump’s LLC could owe $50 million and possibly much more to one or more creditors that have not been disclosed to the public. Though the president essentially could be on the hook to some entity or some person for over $50 million, the financial disclosure rules do not require Trump to list the loans and liabilities of companies he owns. (He only has to reveal his personal loans.)

“I think the American people are at risk because we don’t know know with whom Donald Trump is entangled financially,” Clark says. “If I owe a lot of money to someone, I will probably want to do what I can to keep that person or institution happy. We don’t know the terms of this debt and we don’t know whether Donald Trump will be tempted to look out for his own financial interest in addressing the concerns of his creditor, whoever that is.”

A recent Wall Street Journal article noted that Trump pays a minimum of $4.4 million a year in interest in connection with his loan from Chicago Unit Acquisition LLC. His disclosure form states he pays the prime interest rate plus 5 percent for this loan. (Consequently, Chicago Unit Acquisition would have at least that much in annual revenue, though none is reported.) And the Journal report deepened the mystery. It noted that it had paid two research firms to search for paperwork connected to this loan, but both came up empty-handed.

In a 2016 interview with the New York Times, Trump briefly addressed the loan. He said that he had purchased the debt, via Chicago Unit Acquisition, from a group of banks he had previously borrowed from. Jason Greenblatt, the Trump Organization’s chief legal officer, would not discuss with the Times why Trump had not simply retired the debt and instead was continuing to pay interest on it. “I am not sure it’s appropriate for us to discuss our sort of internal financial reasoning behind transactions in the press,” Greenblatt told the Times. “It’s really personal corporate trade secrets, if you will. Neither newsworthy or frankly anybody’s business.”

On his 2015 disclosure form, Trump did list Chicago Unit Acquisition LLC as having a value, putting it at between $1,000 and $25,000—still substantially lower than the sum Trump reports owing to it. When the Times asked Trump why Chicago Unit Acquisition LLC was valued so low on his financial disclosure, he replied, “We don’t assess any value to it because we don’t care. I have the mortgage. That is all there is. Very simple. I am the bank.”

“Whether or not Mr. Trump cares or not about a liability is irrelevant to his obligation to disclose information on the Form 278,” says Norm Eisen, who was a top ethics attorney in the Obama administration and who now co-chairs Citizens for Responsibility and Ethics in Washington. “Questions about the apparent inconsistency in how the loan was and is treated on his disclosures are legitimate, and a normal president would provide additional information to clear them up.”

Alan Garten, Trump’s personal attorney, did not respond to a request for comment, nor did the White House.

Richard Painter, who served as the chief ethics lawyer in the George W. Bush administration and who co-chairs CREW with Eisen, says if there are no loans offsetting the value of Chicago Unit Acquisition, Trump’s disclosure form should list the outstanding debt as an asset. “None of the underlying assets or liabilities of the LLC owned by Trump need to appear on the 278—just its net value and Trump’s ownership in it,” Painter says. “That is one of the reasons the form is incomplete. If the LLC is owed money, that is a positive; if it owes money, that is a negative, for determining its value.”

Either Trump’s disclosure report is incomplete or there could be a hidden creditor, Eisen and Painter assert. If Trump were to release his tax returns, as all other major presidential candidates have done in recent decades, they point out, he could clear up the matter by providing information on his interest payments. (Eisen and Painter have filed a lawsuit against Trump alleging that the president has violated the Emoluments Clause of the Constitution by maintaining a number of beneficial financial relationships with foreign governments.)

“Without more information, we cannot properly assess the import of this entry, or of the changes in how it was reported,” Eisen says. “We need those additional details, including to assess possible conflicts. It may well be the case that the answers lie in Mr. Trump’s tax returns, but he has refused to provide them. This is yet another transparency failure on the part of the president.”