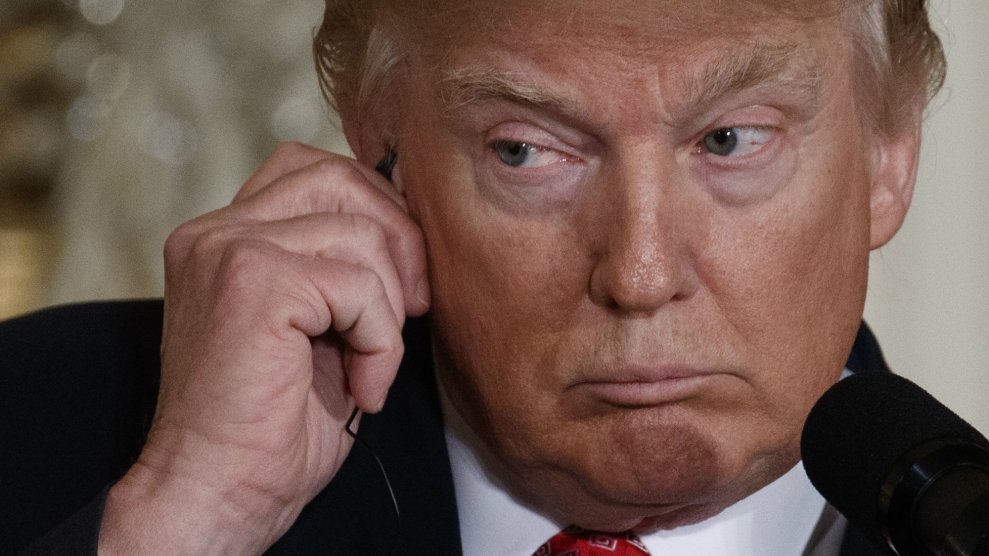 Keep it short and free of nuance—that is the new guidance that has recently circulated to some intelligence analysts who compile materials for the President’s Daily Brief on security threats around the globe.

The classified guidance, which was reviewed by Mother Jones, suggests that President Donald Trump’s daily national security briefing contains far less information than the daily reports presented by the intelligence community to past presidents—and about a quarter of the information President Barack Obama received. The memo sent to certain analysts within the intelligence community notes that the commander in chief’s daily briefing book typically contains reports on only three topics, typically no more than one page each. According to the guidance, Trump’s PDB also includes space for a short update, presumably on matters brought up in previous briefs. The Office of the Director of National Intelligence, which oversees the process of producing the PDB, declined to comment on the memo. The White House did not respond to a request for comment.

“That unfortunately sounds like…bowing to the reality of a president with a short attention span and little ability to deal with ambiguities,” says former CIA official Paul Pillar.

The guidance states that analysts should only include facts that support their analyses, and it explains that topics presented in the PDB will not be covered from different perspectives in separate briefings. That means that dissenting or conflicting views might not be presented to Trump. Obama’s PDB did include dissenting information, when appropriate, according to a former top CIA official with direct knowledge of the PDB.

Presumably, the memo’s guidelines—less material, less nuance, less dissent—were developed in response to Trump’s reactions to the materials he has received. If the memo does not reflect direct instructions from Trump or his aides to the intelligence community, it is a reflection of the assumptions senior intelligence officials have developed about how best to present information to Trump.

“These issues about the overall length of the book as well as whether there are going to be conflicting interpretations—that unfortunately sounds like…bowing to the reality of a president with a short attention span and little ability to deal with ambiguities,” says Paul Pillar, a former senior CIA official who is now a senior fellow at the Brookings Institution and Georgetown University.

In December, Trump alarmed the national security community when he said in an interview that he did not require daily intelligence briefings, which he found monotonous and repetitive. “I don’t have to be told the same thing in the same words every single day for the next eight years,” he said. The following month, as he was about to assume office, he told Axios that he preferred his briefing materials to be succinct, preferably no longer than a page: “I like bullets or I like as little as possible. I don’t need, you know, 200-page reports on something that can be handled on a page. That I can tell you.” In a recent story about turmoil within the National Security Council, the New York Times noted Trump’s preference for shorter briefing documents, reporting that “while Mr. Obama liked policy option papers that were three to six single-spaced pages, council staff members are now being told to keep papers to a single page, with lots of graphics and maps.”

In comparison to Trump’s three-page PDB, the former senior CIA official who served during the Obama administration estimates the former president’s daily brief typically ranged from 12 to 14 pages, and it contained videos, maps, charts, and interactive features. Obama tended to read it on a tablet. Historically, the document—which relays key intelligence and national security information—has averaged six to eight pages, according to David Priess, author of The President’s Book of Secrets: The Untold Story of Intelligence Briefings to America’s Presidents From Kennedy to Obama.

Trump’s daily brief appears to be significantly shorter than that of other modern presidents, but Priess says the document often evolves over the course of a commander in chief’s term. “Many of these topics are new even to an experienced politician, much less somebody like the president who has not been immersed in national security or political affairs before,” he explains.

Priess notes that the PDB varies based on the personality and style of every president, and it is the intelligence community’s job to communicate the information in a way the president can easily understand. In fact, Priess jokes in his book that the PDB is so tailored to each president that if the commander in chief wants the daily brief communicated through interpretive dance, analysts have to take dance lessons. But he says the PDB is no laughing matter. “Any president who chooses not to incorporate the objective analysis as contained in the President’s Daily Brief does so at his own peril,” he explains. “Everybody else in the national security bureaucracy has a policy preference or a stake in decisions being made and getting those ideas in front of the president.”

James Jeffery, who served as deputy national security adviser in the George W. Bush administration and who is now a fellow at the Washington Institute for Near East Policy, says he doesn’t see a shortened PDB as a reason for concern, as long as Trump is open to intelligence and national security experts updating him throughout the day, if needed. “Two months ago, the big shock was he wasn’t getting these things at all, so [if] he’s actually getting them every day, that’s a step in the right direction,” Jeffrey comments.

Priess agrees the length and style of the daily brief is not necessarily cause for worry, but he points out that when a crisis hits, the president may be less prepared if he’s not getting the extensive analysis his predecessors received. “There may be more need for the backstory and the explanations during the crisis than he would have if he absorbed more assessments every day,” Priess explains. “The caveat to that, of course, is if he would simply not read anything if more assessments were put in front of him, if he would just not bother to read it at all because it did not fit his style, then it would be counterproductive anyway.”