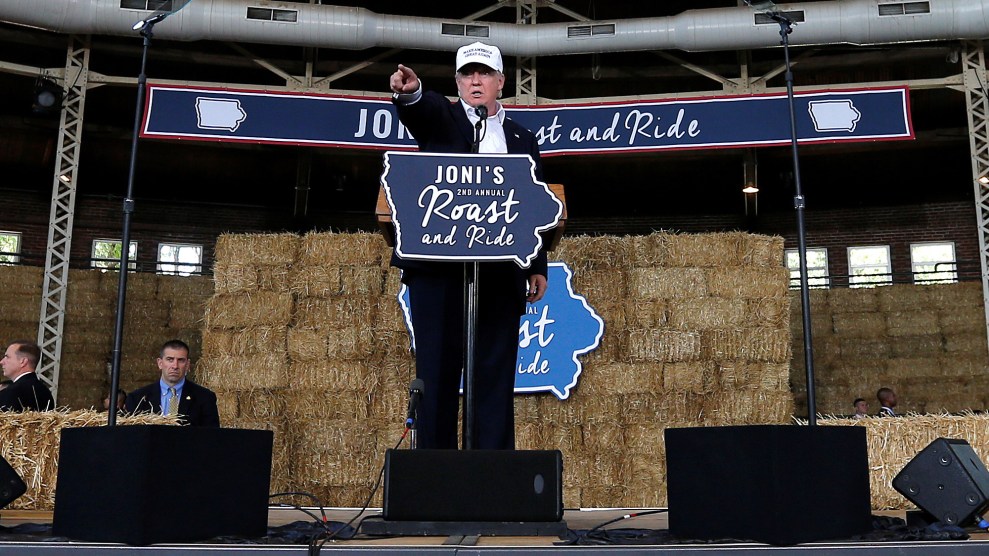 American farms overflow with certain foods: Our almond, corn, soybean, cotton, and wheat farms, and hog, chicken, and beef feedlots all churn out more than we can eat, wear, or burn in our cars as biofuel. That’s why industrial-scale US agriculture needs robust and growing export markets. During the campaign, Donald Trump courted support from these agribusiness interests, assembling a 60-plus-person advisory panel of farm-state politicians and industry flacks, and thundering from the stump against the “radical regulation” of farms.

But on the question of trade, Trump strayed far from his flock of agribiz supporters, lashing out against the very deals that Big Ag has been pushing for a generation and trash-talking China, a prized destination for our farm goods. In the first days of his presidency, Trump has already shown he meant business. He formally removed the United States from the Trans-Pacific Partnership (TPP), a massive deal hotly supported by Big Ag that would link the United States with 11 nations on both sides of the Pacific Ocean. And he vowed to renegotiate the North American Free Trade Agreement (NAFTA) with Mexico and Canada, two of the biggest foreign buyers of our farmed goods.

The countries that Trump most directly targeted in his trade tirades, Mexico and China, are two of the three biggest export markets for our farmed products.

He has also initiated a fight with Mexico over his beloved border wall—one that threatened to bloom into a full trade war on Thursday afternoon when White House spokesman Sean Spicer dangled the idea of collecting funds to pay for the barrier by imposing a 20 percent tax on all imports. Spicer’s statements were widely misreported: He never mentioned a tax specifically targeting Mexico, and he quickly walked back the idea anyway.

But if we did get sucked into a US-Mexico trade war, the consequences would be massive on both sides of the border. The United States imports nearly a third of the fruit and vegetables we consume, and Mexico accounts for 44 percent of that foreign-grown cornucopia, much more than any other country. It’s by far our biggest supplier of avocados, sending us more than 90 percent of the Hass varietals we consume, and it also delivers loads of tomatoes and peppers—meaning that in the event of a trade war, your guacamole could become very dear, indeed.

For Mexico, the stakes are even higher. As Greg Grandin, a professor of history at New York University, recently noted, NAFTA “destroyed the Mexican farming industry, transforming what is left of it into the production of specialty crops to meet the all-season US demand for strawberries, broccoli, and tomatoes.” Mexico now relies heavily on imports of US wheat, corn, and soybeans. A major disruption in supply could trigger price spikes in these commodities, leading higher prices for staples like tortillas and meat in a country already being roiled by protests over rising gas prices.

Amid the tumult, US agricultural players are freaking out, and for good reason. The countries that Trump most directly targeted in his trade tirades during the campaign, Mexico and China, are two of the three biggest export markets for farmed products. The third biggest market is Canada—the country that joins the United States and Mexico in NAFTA. According to Joseph Glauber, who served as chief economist at the US Department of Agriculture under most of Obama’s presidency, US agriculture exports to China, Mexico, and Canada averaged $63 billion annually between 2013 and 2015—accounting for 44 percent of total food/ag US exports.

For soybeans and pork, two of the most valuable US ag export products, the reliance is particularly stark. The United States is the world’s largest soybean producer, and our farms export nearly half of what they harvest. The biggest recipients are China and Mexico, which together account for nearly 70 percent of US soybean exports, buying a total of about $16.6 billion worth of the product. They also make up two of the top three destinations for US pork.

In an apparent attempt to ease agribiz concerns about China, Trump back in December appointed Iowa Gov. Terry Branstad, who has been promoting his states’ soybeans, corn, and pork to China for decades, as ambassador to that country. But Mexico and the TPP countries—which include Canada and major US pork and beef buyers Japan and South Korea—remain in his cross-hairs.

“Believe me, we’re going to have a lot of trade deals,” Trump told a group of Republican legislators.

The American Farm Bureau Federation, which promotes the interests of corporate agribusiness, expressed dismay over Trump’s rejection of the TPP, mourning it as a “positive agreement that would add $4.4 billion annually to the struggling agriculture economy” and requesting that Trump commit to “ensuring we do not lose the ground gained—whether in the Asia-Pacific, North America, Europe or other parts of the world.” Around 130 companies and trade groups, representing virtually the entire US ag industry, signed a letter to Trump on January 23, informing the new president that “NAFTA has been a windfall for US farmers, ranchers, and food processors,” and that food and agriculture exports to Canada and Mexico have more than quadrupled since the deal’s signing in 1994.

Of course, these groups cannot claim to have been surprised by Trump’s trade moves—he made his stance on the issue crystal clear during his campaign. His rural proxies emphasized Trump’s anti-regulatory zeal and his vow to end the inheritance tax, a big deal to the American Farm Bureau but not so consequential to most farmers (the USDA estimates it affects less than 1 percent of farms). On trade, they delivered a trust-us message.

In July, when I spoke to Charles Herbster, the multi-level marketing and cattle magnate who chaired Trump’s Agricultural and Rural Advisory Committee, he gave me the campaign’s spiel. Before vowing Trump would end over-regulation and the reduce the inheritance tax, Herbster tried to square the circle on trade:

Herbster told me that he’s been getting calls from farmers “concerned about issues of trade.” Herbster said he reassures them that Trump “is not against trade in any way”—it’s “just that he wants trade to be fair,” and that means renegotiating trade deals. Herbster acknowledged that “trade for agriculture in the Midwest has probably been pretty good for the past few years,” but that it “hasn’t been good for small manufacturers in middle America and the coasts.” Trump, he suggested, would make trade great again for everyone.

Another prominent Trump rural proxy during the campaign, Texas Agriculture Commissioner Sid Miller, took a similar line, declaring in August that Trump’s trade stance could actually benefit US farmers because “above all, [Trump wants] to be known as the president that cuts the good deals…He’s a deal maker, that’s his whole mantra.”

In place of big, multi-national pacts like NAFTA and TPP, Trump has vowed to make multiple bi-lateral trade deals with individuals countries. “Believe me, we’re going to have a lot of trade deals,” Trump told a gathering of Republican legislators Thursday, Reuters reports. “If that particular country doesn’t treat us fairly, we send them a 30-day termination, notice of termination.”

Trump and his team “seem to have a very limited understanding of the complications of negotiating deals,” says one trade policy analyst.

Ben Lilliston of the Institute for Agriculture and Trade Policy says Trump may simply not understand that negotiating trade deals is a long and difficult process. “They want the bi-lateral deals, because it allows them to bully other countries more easily,” he said. “But they seem to have a very limited understanding of the complications of negotiating deals—it’s an extremely time-consuming process.”

Of course, the big agribusiness interests don’t just prize trade deals because they expand markets for pork and (soy)beans. Deals like NAFTA and the TPP, Lilliston added, also “allow agribusinesses to set up wherever they want.” For example, US-based pork behemoth Smithfield—now, ironically, owned by a Chinese conglomerate—didn’t just use NAFTA as a lever to expand pork exports to Mexico; it also dramatically expanded its hog-rearing operations in Mexico in the wake of the deal’s onset in 1994, sometimes over the protests of people who live near the hog operations.

US agriculture policy encourages farms to produce as much as possible, even in times of low prices. And since domestic demand rises only at the rate of population growth, these farmers rely on foreign markets to maintain profit growth, points out the former USDA economist Glauber. “Those facts explain why US agricultural interests have been such strong supporters of free trade agreements in the past,” he wrote.

Trump managed to win big in the corn and soybean counties of the Midwest, in areas largely reliant on exports. But if he repeals their beloved trade deals without replacing them, these supporters might ultimately give up on Trump.