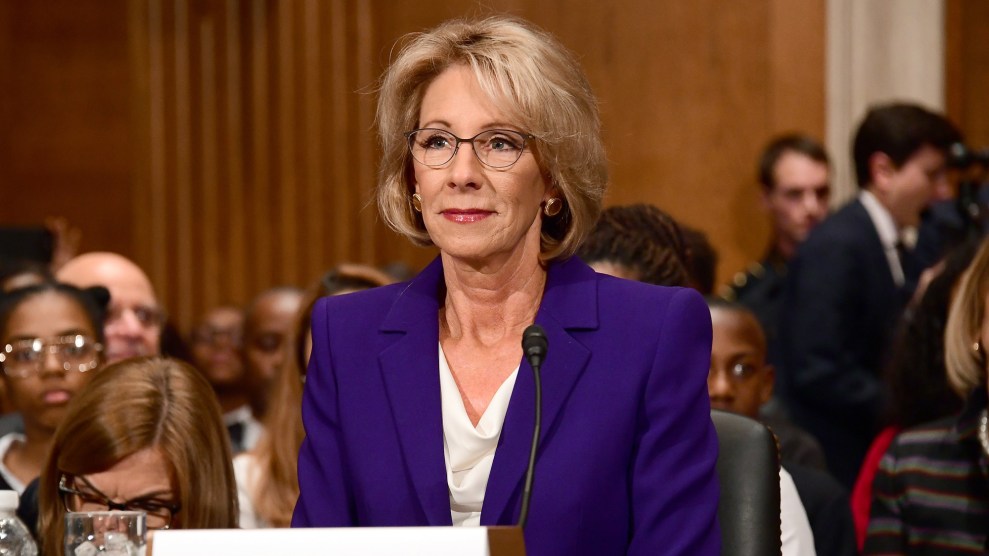 After a contentious partisan debate and fierce opposition from Senate Democrats, billionaire GOP megadonor and education secretary nominee Betsy DeVos squeaked through her committee vote in a party-line vote Tuesday afternoon. Her nomination will now go to the Senate floor.

As my colleague Kristina Rizga points out in her recent investigation, DeVos and her family have donated millions of dollars to right-wing causes and conservative Christian groups. Teachers unions, activists, and Senate Democrats criticized DeVos, a longtime school choice proponent and wife of Amway scion Dick DeVos, saying that she lacks proper qualifications, isn’t committed to public education, and may not be willing to enforce federal laws that protect students with disabilities. In the weeks since DeVos’ initial hearing, calls flooded the offices of senators who served on the Senate Health, Education, Labor, and Pensions Committee, mostly in opposition to her nomination.

Senate Democrats debated whether the initial vote in favor of DeVos was valid after Sen. Orrin Hatch voted while absent. Committee chair Sen. Lamar Alexander allowed a second vote to take place when Hatch returned, much to the Democrats’ displeasure, clearing the hurdle for DeVos with a 12-to-11 vote along party lines.

Though they sided with the panel, Republican Sens. Susan Collins and Lisa Murkowski refused to commit to voting in DeVos’ favor on the Senate floor. “[H]er concentration on charter schools and vouchers,” said Collins, who represents Maine, “raises the question of whether or not she fully appreciates that the secretary of education’s primary focus must be on helping states and communities, parents, teachers, school board members and administrators strengthen our public schools.” Collins added she was concerned about DeVos’ “lack of familiarity” with the Individuals With Disabilities Education Act.

Murkowski, who represents Alaska, said her office had received thousands of calls from constituents, adding that DeVos “must prove she will work to help the struggling public schools that strive to educate our children.”

Murkowski added, “I will vote to report Mrs. DeVos’ nomination to the full Senate. But do know she has not yet earned my full support.”