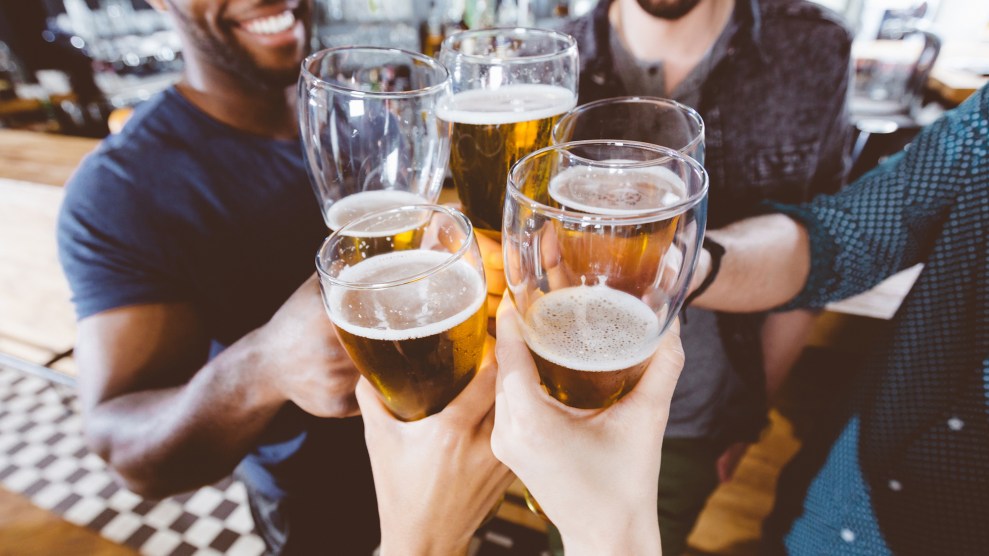 When hunter-gatherer tribes began to stay put and focus on growing crops, starting around 13,000 years ago, things didn’t begin promisingly. The fossil record suggests the switch to farming made us shorter and triggered widespread malnutrition and dental problems. And yet, the agricultural revolution ultimately brought forth cities, writing, and what we know as civilization. So what saved the day?

The answer might well be beer, which is really just what happens when you sprout a bunch of grain, thus releasing its sugars, and then grind it into a mush with water, exposing it to those ubiquitous single-cell microbes we call yeasts. Here’s a fascinating National Geographic piece on humanity’s long-standing need for a stiff drink:

Indirectly, we may have the nutritional benefits of beer to thank for the invention of writing, and some of the world’s earliest cities—for the dawn of history, in other words. Adelheid Otto, an archaeologist at Ludwig-Maximilians University in Munich who co-directs excavations at Tall Bazi [an archeological site in northern Syria], thinks the nutrients that fermenting added to early grain made Mesopotamian civilization viable, providing basic vitamins missing from what was otherwise a depressingly bad diet. “They had bread and barley porridge, plus maybe some meat at feasts. Nutrition was very bad,” she says. “But as soon as you have beer, you have everything you need to develop really well. I’m convinced this is why the first high culture arose in the Near East.”

Fermentation—the process by which yeasts consume sugars—doesn’t just generate alcohol and carbon dioxide. It also delivers “all kinds of nutrients, including such B vitamins as folic acid, niacin, thiamine, and riboflavin,” the author, Andrew Curry, notes. Even the alcohol would have been useful to these early settlements, beyond the gift of a buzz—it’s toxic to many microbes, helping alcohol-tolerant yeasts colonize the resulting brew and pushing out pathogens that make use sick. And that effect “explains why beer, wine, and other fermented beverages were, at least until the rise of modern sanitation, often healthier to drink than water,” Curry writes.

That doesn’t mean you should replace your daily water intake with beer. Most—not all—Americans have access to clean water, and we have a better variety of nutritious foods available to us than those early agricultural societies seemed to. And of course, we now know that tippling excessively courts other problems, including liver disease. And besides, all of these B vitamins “would have been more present in ancient brews than in our modern filtered and pasteurized varieties.”

Still, as Curry notes, emerging research suggests that enjoying a bit of alcohol may be part of what makes us human—and it didn’t just help us through the agricultural revolution:

To our fruit-eating primate ancestors swinging through the trees, however, the ethanol in rotting fruit would have had three other appealing characteristics. First, it has a strong, distinctive smell that makes the fruit easy to locate. Second, it’s easier to digest, allowing animals to get more of a commodity that was precious back then: calories. Third, its antiseptic qualities repel microbes that might sicken a primate. Millions of years ago one of them developed a taste for fruit that had fallen from the tree. “Our ape ancestors started eating fermented fruits on the forest floor, and that made all the difference,” says Nathaniel Dominy, a biological anthropologist at Dartmouth College. “We’re preadapted for consuming alcohol.”

So wine (fermented fruit juice) got our evolutionary predecessors down from the trees, and beer (fermented grain mush) got our early farming ancestors through an extremely rough transition. Sounds like something to ponder over a beer—preferably, an unfiltered, unpasteurized one.