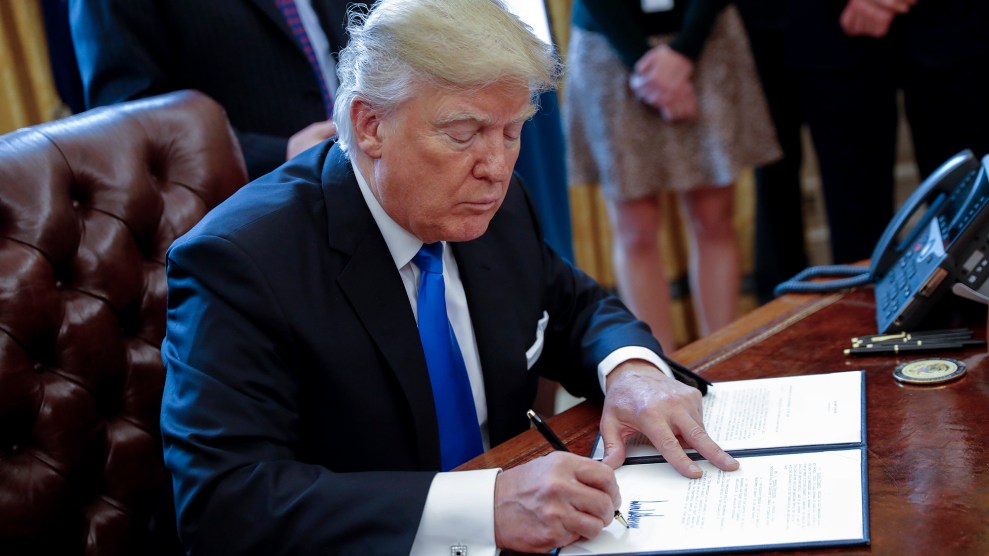 The administration’s plans were reported by the New York Times on Wednesday after the paper obtained a draft executive order titled “Detention and Interrogation of Enemy Combatants.” The order would roll back many of the restrictions on detainee interrogations and detention that Obama put in place, including one that gave the International Committee of the Red Cross access to all detainees in US custody. But in his daily press briefing on Wednesday afternoon, White House Press Secretary Sean Spicer said the draft was “not a White House document.”

The CIA’s black sites were a series of facilities located in various countries around the world where the CIA detained, questioned, and often tortured detainees with practices including waterboarding, confinement in small boxes, beatings, and extreme sleep deprivation. They were exposed in 2005 by the Washington Post’s Dana Priest.

The draft doesn’t direct the CIA to reopen the sites immediately, but it requests policy reviews to make recommendations to Trump. As the Times‘ Charlie Savage notes, Trump pledged during the presidential campaign to reinstate waterboarding and a “hell of a lot worse” and said that even if torture tactics didn’t work, the detainees “deserve it anyway.”

Throughout the draft, phrases such as “jihadist” and “global war on terrorism” are crossed out and replaced with “Islamist,” “radical Islamist terrorism,” and similar phrases.

Shortly after news of the order broke, Sen. John McCain (R-Ariz.) released a statement condemning the use of torture. “The President can sign whatever executive orders he likes,” McCain said. “But the law is the law. We are not bringing back torture in the United States of America.”

The draft order comes five days after Mike Pompeo, since confirmed as CIA director, suggested he was open to torture techniques. In written answers to the Senate Intelligence Committee after his January 12 confirmation hearing, Pompeo seemed to leave the door open for a review of the ban on torture methods such as waterboarding. During his hearing, Pompeo had given a seemingly contradictory answer, saying he would “absolutely not” restart the CIA’s use of such techniques and adding that he couldn’t “imagine [he] would be asked by the president-elect or then-president” to have the CIA torture someone.

The full three-page draft, posted in full by the Washington Post later Wednesday morning (and later by the Times), lays out the rationale for the review:

Our Nation remains engaged in a global armed conflict with ISIS, al Qaeda, the Taliban, and other associated international jihadistIslamist terrorist groups. This conflict is not of our choosing, but was declared against us by the jihadistterrorist organizations groups that have plotted and carried out mass attacks against the United States, its citizens, and its allies beginning well before the atrocities of September 11, 2001, and continuing to this day…Experience has also shown that obtaining critical intelligence information is vital to taking determined offensive action, including military action, against those groups that make war on us and that are actively plotting further attacks.

While there have been continuity in many of the military and intelligence policies of the United States in the global war on terrorism,fight against radical Islam, the United States has refrained from exercising certain authorities critical to its defense.

The draft, which contains extensive editing notes, would rescind two of Obama’s executive orders: one to close the military prison at Guantánamo Bay, Cuba, and the other to give the Red Cross access to all detainees. It also orders the director of national intelligence, the attorney general, and the director of the CIA to “recommend to the President whether to reinitiate a program of interrogation of high-value alien terrorists to be operated outside the United States and whether such program should include the use of detention facilities operated by the Central Intelligence Agency (CIA).”

This story has been updated to include the statement from McCain and the comment from Spicer.