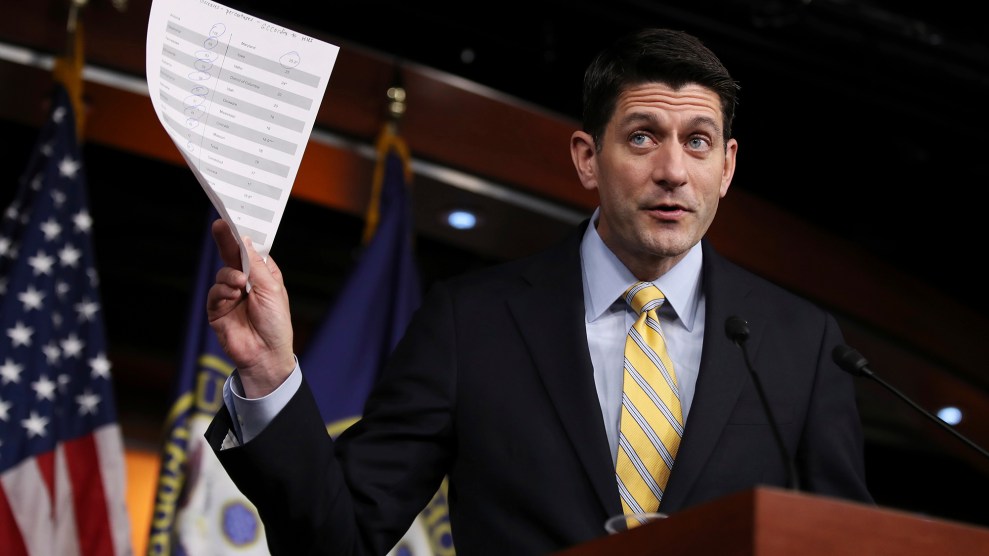 During a news conference on Thursday, House Speaker Paul Ryan (R-Wis.) said the process to dismantle Obamacare will include stripping all federal funding for Planned Parenthood, but he did not provide much further detail.

His remarks come two days after a Republican-led House investigative panel released a report that recommended the health care provider be defunded. The investigative panel—created to examine allegations that Planned Parenthood was selling fetal tissue for profit—was then disbanded, because it was not reauthorized for a new Congress. Planned Parenthood was never found guilty of any wrongdoing at the state or federal level, despite multiple GOP-led investigations.

Democrats immediately denounced the move. “I just would like to speak individually to women across America: This is about respect for you, for your judgment about your personal decisions in terms of your reproductive needs, the size and timing of your family or the rest, not to be determined by the insurance company or by the Republican ideological right-wing caucus in the House of Representatives,” said House Minority Leader Nancy Pelosi (D-Calif.). “So this is a very important occasion where we’re pointing out very specifically what repeal of the [Affordable Care Act] will mean to women.”

The measure to cut funding will appear in a special fast-track bill expected to pass Congress in February, during a session that allows legislation to bypass filibuster. The bill would need only a simple majority of senators to pass, rather than a 60-vote supermajority. Should the measure pass, according to the Washington Post, the largest women’s health care organization in the country would lose 40 percent of its funding. Planned Parenthood received $528 million in federal funding in 2014, and the government is its largest single source of funding.

A federal law known as the Hyde Amendment forbids the use of any federal funds for abortions. The money Planned Parenthood receives is for preventative screenings, birth control, and general women’s health care for their 2.5 million patients.

“Defunding” Planned Parenthood is a misnomer. Their true intent is to block millions of people who rely on Medicaid from PP health centers.

Rep. Diane DeGette (D-Colo.) promised that Democrats would “stand against this with every fiber of our beings.”

A similar measure passed the House and the Senate in 2015 but was repealed once it reached President Barack Obama’s desk. Obama has long supported the preservation of Planned Parenthood’s federal funding. In December, he issued a rule that barred states from withholding funds from Planned Parenthood based on the fact that they provide abortion care.

President-elect Donald Trump has indicated that he opposes continuing federal funding for Planned Parenthood, so a presidential veto would be unlikely. Similarly, Vice President-elect Mike Pence has been staunchly anti-abortion throughout his political career—he signed a measure to defund Planned Parenthood in Indiana during his tenure as governor, and he was successful in slashing funding for the provider in his state.

Reacting to Ryan’s proposal, Cecile Richards, president of the Planned Parenthood Action fund, told reporters, “It’s likely no accident that this attack was launched the day after Vice President-elect Mike Pence, a long-time opponent of Planned Parenthood, held a closed-door meeting with Speaker Ryan and the Republican leadership.”