On November 14, six days after Donald Trump won the presidential election, more than 80 researchers from 42 schools of public health gathered for a closed-door meeting at the Boston University School of Public Health. Their agenda: how to get around the federal government’s de facto ban on researching the health impact of gun violence and get it done anyway.

“The idea was to pull together a meeting to say, ‘We have had no change in the number of firearm deaths and firearm injuries since 2000. It’s become endemic,'” says Sandro Galea, a physician, epidemiologist, and the dean of the BU School of Public Health, who organized the hush-hush meeting. “There has been no action on this to speak of at the federal level, and there has been no clear statement from academic public health on this issue. We brought people together to ask, ‘What should academic public health be doing toward moving us collectively toward mitigating the consequences of gun violence?'”

Despite the more than 30,000 gun-related deaths that occur in America every year, firearms receive relatively little attention as a subject of public-health research. A recent research letter published in the Journal of the American Medical Association found that gun violence is the least-researched leading cause of death in the United States. This is largely because of a 1996 bill that prevented the the Centers for Disease Control and Prevention (CDC) and other agencies from using federal money to “advocate for or promote gun control.” The lack of funding combined with the toxic environment that surrounds the debate over gun rights has made most public-health researchers wary of touching the topic. 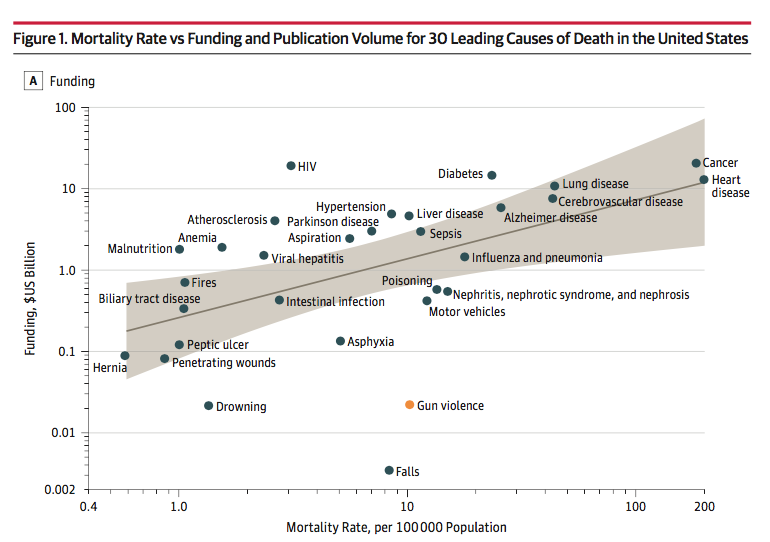 The group that met at BU in November hope to reverse that two-decade trend. They drafted a call to action, the final version of which was published yesterday in the American Journal of Public Health. It outlines a plan to beef up gun violence research and scholarship by seeking funding from the private sector, as well as seeking common ground between pro-gun advocates and gun safety advocates, and developing state-level initiatives.

“Federal funding is not going to happen with the National Rifle Association around,” says John Rosenthal, a Massachusetts-based businessman and gun owner who was a keynote speaker at the November meeting. In 1994, he started Stop Handgun Violence, which has advocated stricter gun laws in his home state. (Massachusetts has the lowest gun violence rate in the nation, and some of its toughest gun laws.) “In the absence of public funding, this call to action could lead to significant private funding,” he says. “If enough schools of public health really look at it—and this is a public health epidemic—then lives will be saved. I think there will be a critical mass with this group and more that will follow.”

“It is very charged when you have the NRA calling you out personally. It has a chilling effect.”

Galea says gun researchers have a lot of catching up to do. “The fundamental, foundational work of documenting the full scale of the health consequences of firearms has not been done,” he says. “It’s the kind of project that we do all the time. It just hasn’t been done with firearms because there haven’t been resources.”

Even if the researchers overcome these financial obstacles, they must still contend with the political climate. “Trump was a clear supporter of gun rights throughout the campaign and has widely claimed support from the gun lobby as a core part of his appeal; the gun lobby spent more than $30 million on the campaign,” they write in their call to action. “This portends challenges to advancing gun policy at the federal level in the next four years, if not longer.”

The NRA has called out Galea for his “deeply flawed research,” likening his defense of a controversial recent study of gun laws to “the behavior of a mule.” “It is very charged when you have the NRA calling you out personally,” Galea says. “It has a chilling effect. It’s hard to encourage young people to make a career out of studying something which brings with it the threat of a public fight with a group as powerful as the NRA.” After 20 years of delay, Rosenthal says it’s time to stop ignoring one of the country’s leading causes of death. “We’ve reached a tipping point,” he says. “Enough is enough.”