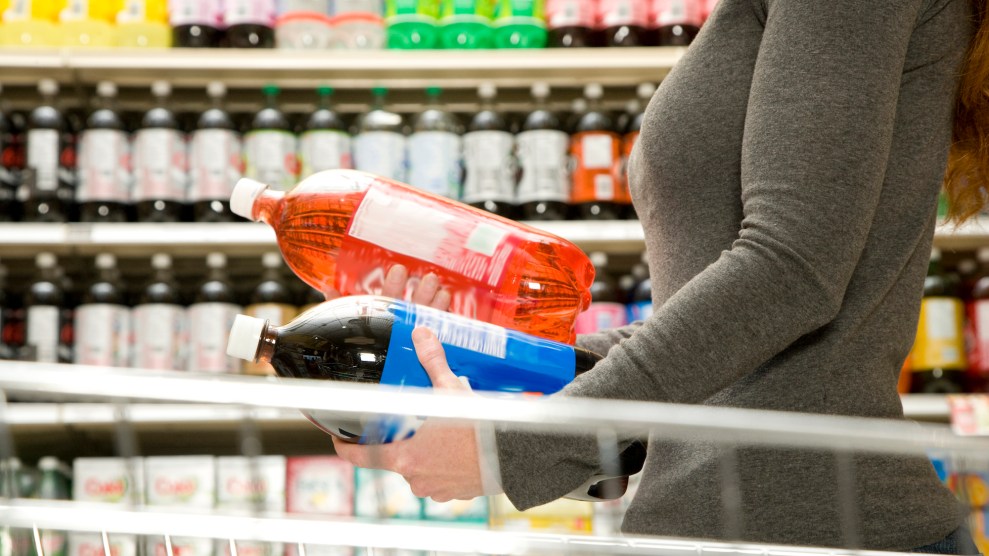 Poor people who receive government food aid use it to load up on Coke. Or so the New York Times suggests. Under an image of a shopping cart stuffed with half-gallon jugs of soda, the Times’ Anahad O’Connor writes in a widely shared recent piece that the “No. 1 purchases by SNAP households are soft drinks.” SNAP refers to the Supplemental Nutrition Assistance Program, formerly known as food stamps. By contrast, he writes, among non-SNAP households, “soft drinks ranked second on the list of food purchases, behind milk.”

SNAP is an important program in a society with a 13.5 percent poverty rate and growing inequality. According to a 2015 report (press release) from the White House Council of Economic Advisers, the “large majority of households receiving SNAP include children, senior citizens, individuals with disabilities, and working adults,” and “two-thirds of SNAP benefits go to households with children.” Here’s more:

SNAP benefits lifted at least 4.7 million people out of poverty in 2014—including 2.1 million children. SNAP also lifted more than 1.3 million children out of deep poverty, or above half of the poverty line (for example, $11,925 for a family of four).

Unfortunately, as University of Minnesota public affairs professor Joe Soss argues at Jacobin, the O’Connor article presents a skewed picture of poor people engaging in tax-payer financed bad behavior. “The poors! They’re behaving badly! And government handouts paid for with your tax dollars are to blame,” Soss writes. Such an attitude about the safety net neatly mimics the ideology now ascendant in the GOP-controlled Congress, perfectly encapsulated by this infamous 2014 National Review article, “The White Ghetto,” which depicts SNAP recipients using their benefits to buy soda by the case load and then trading it for cash, drugs, and even sex.

In that context, Soss is right to characterize the Times piece as a “political hack job against a program that helps millions of Americans feed themselves, and we should all be outraged that the New York Times has disguised it as a piece of factual news reporting on its front page.” I’m sympathetic to Soss’ view—I made a similar argument in this 2015 piece on SNAP.

“There were no major differences in the expenditure patterns of SNAP and non-SNAP households, no matter how the data were categorized.”

Indeed, the O’Connor piece is based on this recent US Department of Agriculture study comparing the grocery purchases of SNAP and non-SNAP shoppers, tracked at a a “leading grocery retailer” over 2011. Its conclusions are quite different from those trumpeted by O’Connor. The report found that “there were no major differences in the expenditure patterns of SNAP and non-SNAP households, no matter how the data were categorized.” That conclusion comes on the heels of a 2014 study by USDA researchers finding that SNAP participants are no more likely to consumer sugary beverages than their non-SNAP peers.

As for O’Connor’s factoid about how SNAP households spend more on soft drinks than milk—while the opposite is true for non-SNAP households—that’s true, but the differences are tiny, the new USDA report shows. While SNAP shoppers devoted 5.44 percent of their expenditures to soft drinks versus 3.85 percent to milk, non-SNAPers divided their spending share on the products roughly equally: 4.01 percent on soda versus 4.03 percent on milk. For a $100 trip to the supermarket, in other words, non-SNAP recipients allocated on average 18 cents more on milk than their non-SNAP peers. And they allocate just two cents more to milk than they do to soda.

O’Connor does acknowledge that SNAP-subsidized poor people aren’t making uniquely bad choices at the supermarket—but he buries that fact. In paragraph three, we get the dodgy soda-milk comparison. It isn’t until way down in paragraph seven that he hints at the USDA researchers’ “no major difference” conclusion.

Beyond the implicit poor-shaming—unfortunate, given that Speaker of the House Paul Ryan now has a GOP president in place to sign SNAP-cutting budget bills—the Times piece also muddies a legitimate debate about what sort of diets should be subsidized by food aid. The experts quoted by O’Connor, including New York University researcher Marion Nestle and the food industry critic Michele Simon, want the USDA to ban soda and other junk food from SNAP expenditures. On the other side, according to O’Connor, stands the soda industry, which lobbies against such limits.

But as Parke Wilde, an economist at the Friedman School of Nutrition Science and Policy at Tufts University, notes, the debate is more complicated than that:

One would think from the NYT article that all the good folks favor the restrictions, and all the bad folks oppose. O’Connor didn’t say that the list of supporters for such proposals also includes conservative critics of SNAP, who sometimes include such proposals in an agenda that also has budget cuts, nor that the list of opponents includes anti-hunger organizations, who are concerned that the proposals would increase program stigma and food insecurity by discouraging participation among eligible people.

Wilde argues that soda restrictions in SNAP are worth considering—not in a knee-jerk way, but rather after seeing what happens in a carefully constructed pilot project. If the results suggest that soda restrictions end up reducing the quality of participants’ diets by driving them out of the SNAP program, the idea should be scrapped, he says. And if it results in people making healthier purchases, then restrictions make sense—especially if packaged with incentives to buy more vegetables and fruit. (Early evidence suggests that soda taxes, another policy tool for improving diets, might be effective as well.)

Such a dispassionate approach is difficult, Wilde suggests, because of the “poisoned partisan struggle” over whether a robust safety net is worth having at all. And O’Connor’s piece, I fear, added more heat than light to the debate.