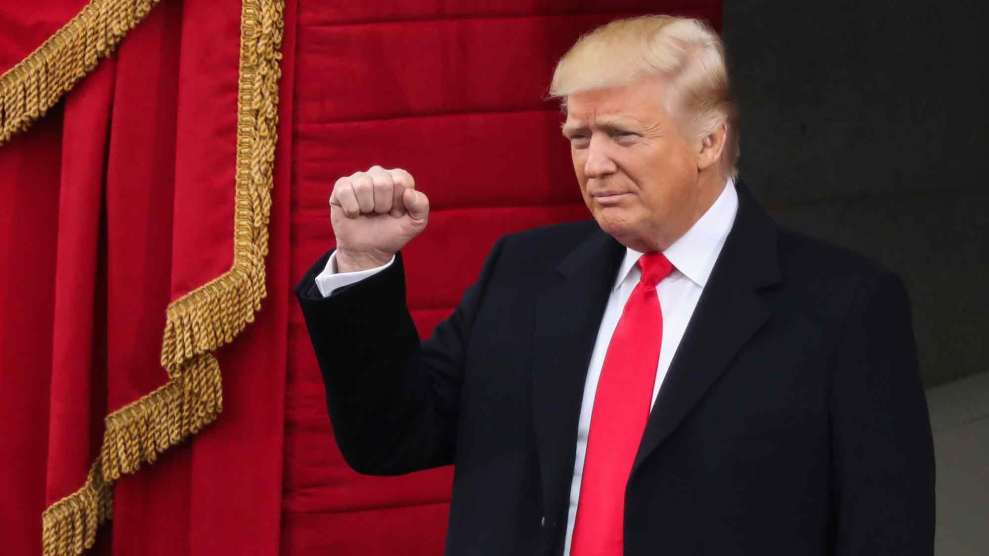 Today, as of noon, the president of the United States is a man who boasted of sexually assaulting women. The nation’s leader is a purveyor of fake news and conspiracy theories who led the racist birther campaign. The commander in chief in charge of the US nuclear arsenal is a fellow who was unfamiliar with the nuclear triad but who is obsessed with revenge. The head of the federal government is a businessman who vowed to “drain the swamp” but who has taken office loaded with troubling conflicts of interest and flouting multiple ethics norms. The defender of the Constitution is a record-setting prevaricator and fabulist who has repeatedly attacked journalists who challenge his false assertions. The guy who oversees national law enforcement is a dishonest developer who was sued for racially based housing discrimination and who lied about his mob ties. The person in charge of US national security is a foreign policy novice who has called for enhancing relations with a foreign power that covertly worked to subvert American democracy in order to benefit him and whose associates are under investigation by agencies he now oversees for possible contacts with that foreign power. The most powerful man in the world is a thin-skinned, arrogant, name-calling, bullying, narcissistic hotelier.

Thank you, America. Or, that is, the 46 percent of the electorate who voted for Donald Trump.

Their view of the nation and its current condition was diametrically opposed to the perspective of the majority, who voted for Hillary Clinton. Trump voters bought his spiel and his shtick. He portrayed the United States as a declining hellhole, a dystopia under siege by undocumented Latino immigrants, criminals, and ISIS, with Middle America workers played for rubes by uncaring, screw-you political, corporate, and media elites in league with international bankers. And Trump was the tough-guy white knight who would do whatever it took—disruption! chaos!—to restore the lives and dreams of hardworking folks and bring about the return of some mythical (whiter?) American greatness. (Details to come.)

And when he gave his first speech as president—his inaugural address on a dismal and gray day—Trump, no surprise, stuck with the simple and bumperstickerish themes that had brought him to this once improbable point: There is “carnage” across the land, the American people have been betrayed by a small group of elites, and it’s time for America First. Speaking to a sea of white people—who were being protected by a police force that is mostly black—Trump peddled the same big and bold promises he slung during the campaign: “America will start winning again, winning like never before. We will bring back our jobs. We will bring back our borders. We will bring back our wealth. And we will bring back our dreams.” The crowd cheered wildly for the nation’s No. 1 salesman. And they hooted when Clinton appeared on the big screen, and many in the VIP section toward the front of the crowd jeered when Sen. Chuck Schumer (D-N.Y.), one of the speakers before Trump, referred to gender identity equality.

Trump turned hate into a political tool. He’s not the first. But he effectively fueled and exploited long-established conservative hatred of Latinos, Obama, Clinton, the media, Muslims. He mocked a disabled reporter. He derided a federal judge who had ruled against him in the Trump University fraud suit as a “Mexican.” He described black communities as nothing but crime-infested and burned-out ghettoes. He encouraged voters to detest Washington and government. He made common cause with conspiracy nut Alex Jones. He won the support of the Ku Klux Klan and the alt-right (the fancy name for white nationalists). He encouraged violence at his rallies. He denounced his opponent as a treasonous criminal and called for her to be locked up. He obnoxiously insulted and openly feuded with, well…just about everyone: Miss Universe, Khizr and Ghazala Khan, Carly Fiorina, Rosie. Spite was his meme.

Worse, Trump hitched hate to fear. He claimed that the nation was gripped by a crime spree (which didn’t exist), that ISIS was on the verge of invading the United States (not really), and that hundreds of millions of undocumented immigrants were poised to “pour” across the border (nope).

Most people who behave in such caddish and uncivil ways are dismissed as jerks—not embraced as the embodiment of the nation and its hopes and aspirations. In modern times, no candidate who campaigned so angrily has ever won the presidency. But early in the race, Trump’s team concluded that Trump was already widely known for his crass and abrasive public persona. (This was well before he was caught on video boasting about grabbing women “by the pussy.”) What was most important, one of his strategists told me this summer, was whether voters accepted Trump’s pitch that the country was in free fall (terrorism! no jobs! immigrants invading!) and were sufficiently freaked out to embrace a political novice who would promise extreme measures to deal with all this crap. Were the voters pissed off enough to accept a TV star businessman (forget the bankruptcies or mob ties—look at that jet) who didn’t give a damn about niceties and who would screw anyone who disagreed with him or got in his way? His only chance, his strategists knew, was if enough Americans wanted an asshole as president. As it turned out, a majority did not, but 63 million did—and that was enough for Trump to bag a win in the Electoral College.

After the election, Trump continued to act and tweet like Trump. As if the act had to continue. With inane tweets, he repeatedly dumped on Alec Baldwin and civil rights icon John Lewis. He referred to Americans who voted against him as the enemy. He compared the intelligence community—which concluded Vladimir Putin had meddled in the US elections to boost Trump—to Nazis and continued to make nice with Putin and to demonize Clinton. Having won the grand prize, Trump showed not a smidgeon of graciousness. He fibbed about matters large and small. (He claimed all the ball gowns were sold out in Washington because so many people would be celebrating his inauguration. High-end clothing outlets told reporters they had plenty of inventory.)

Trump demonstrated that his campaign trail populism was no more than an artifice. He appointed billionaires and Goldman Sachs vets to the Cabinet and did little to clean up the swamp he had denounced. His plan to deal with his own conflicts of interest was a sham. (He begins his presidency in violation of the Constitution’s emoluments clause.) Trump empowered Republicans aiming to privatize Medicare and eviscerate Social Security—notions Trump opposed during the race. He vowed that his Obamacare replacement would entail “insurance for everybody”; then he backtracked. He demonstrated no core ideological convictions. He showed once again that he is 100 percent situational.

His approval rating plummeted to a record low for a president-elect. Yet congressional Republicans stood by him and waved a rubber stamp for his appointees. And it was unclear whether any of his missteps tainted him in the eyes of his die-hard supporters. At the inauguration, his supporters gasped with excitement when he gave the crowd a thumbs-up. Well-heeled folks in the big-donor section applauded his denouncement of the establishment and his vow to give government back to the people. Many went gaga when Melania Trump appeared on the television screens, wearing a fashionable blue coat.

During the campaign, one Trump aide told me that the Trump camp understood that many of his supporters were low-information voters. “They mainly just see the headlines,” he said. So if a headline said, “Trump Vows to Make America Great Again,” that was the message many of these people absorbed. By speaking in slogans and memes—”Lock her up!”—Trump was effectively communicating and connecting with a large group of voters. The specifics didn’t register—or matter.

This has continued during the transition period, with Trump issuing bold promises and boasting that his efforts have already saved American jobs. (The details, often more complicated, don’t reach many of his voters.) He did the same with his short inaugural address, which was light on compound sentences or sophisticated ideas. Consequently, there is no telling if his folks will sour on him, if he keeps insisting that he is doing one helluva job.

Trump now shifts from campaigning to governing. It’s unlikely he will change his tactics. He will continue to praise himself and his efforts and declare every step he takes a gargantuan win for America. He will continue to blame others, if anything falls short or goes wrong. He will keep on picking Twitter feuds and behaving in a juvenile and puerile manner—perhaps as a strategic distraction or perhaps because he simply cannot help himself. He certainly is not embarrassed by his behavior—and a man who cannot be embarrassed is a dangerous man.

So for the American majority who voted against Trump and his keep-it-simple politics of fear, hate, and insult, the nation begins the Trump era with no silver linings. A vain, vengeful, and erratic celebrity who has often acted in crude, bigoted, and ignorant fashion is in control. And, ultimately, he is not the problem. The real trouble is with the 63 million who voted for him. How long will they stand by him and buy his easy-answers, reality-defying pitch? In front of the Capitol, Trump told his supporters, “Together, we will determine the course of America and the world for years to come.” They have already made great progress on that path of hate and fear.