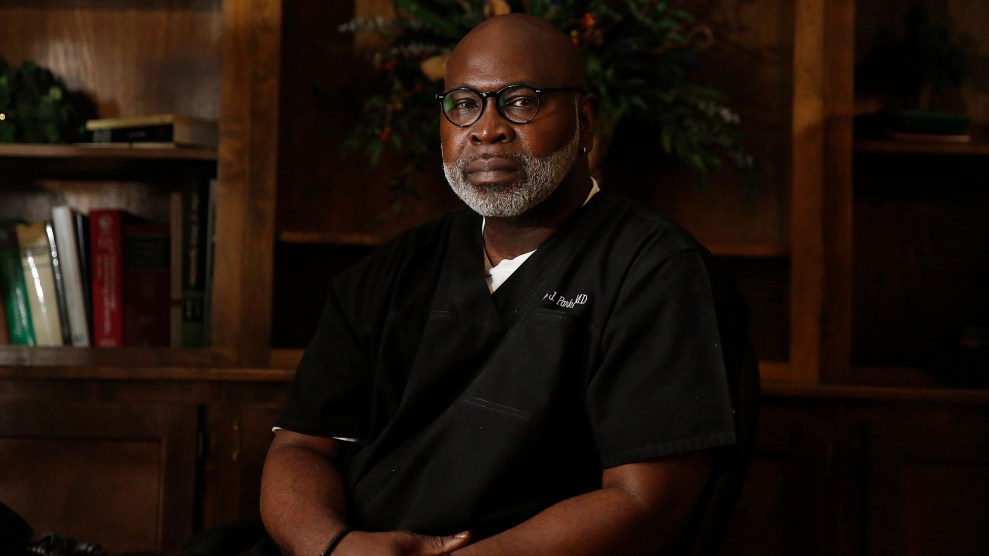 In this photo taken February 22, 2016, Dr. Willie Parker sits at his desk for a portrait at the West Alabama Women’s Center in Tuscaloosa, Alabama.Brynn Anderson/AP Photo

Abortion providers have had a roller-coaster year. On the one hand, a landmark abortion rights case in Texas saw an affirmative ruling from the Supreme Court, overturning restrictions that aimed to put clinics out of business across the United States. At the same time, conservative statehouses pushed through legislation that aimed to decrease abortion access and defund Planned Parenthood, the largest women’s health provider in the country. Months after the Supreme Court ruled in Whole Woman’s Health v. Hellerstedt that the restrictions in Texas qualified as undue burdens and were therefore unconstitutional, Donald Trump was elected president, assuring voters of his staunch support for anti-choice legislation and deflecting allegations of sexual assault.

The week after the election, we called Dr. Willie Parker—a Harvard-educated OB-GYN from Alabama in his 50s who has been providing abortions full time since 2009. He practices in clinics in Alabama, Georgia, and Mississippi, has confronted demonstrators blocking his access, and sued the state of Mississippi to keep the sole clinic in that state open. We wanted to hear how abortion providers are preparing for the next chapter of the battle against reproductive rights. As board chair for Physicians for Reproductive Health, Parker has been at the forefront of the national fight to preserve a woman’s right to choose. Here’s what he had to say about the likely new realities in women’s health during the future Trump administration.

Mother Jones: What’s the conversation like among providers right now?

Willie Parker: Most people can’t even talk. We’re still figuring it out. But I think people are trying to think beyond and say, “Okay, given the inability to overturn the election, and given our ability to prognosticate based on how he’s operated politically, most of us have to think worst-case scenario.” But there’s also really no way of knowing what he’s going to do—he’s been sufficiently vague in his policy positions. We can take some prognostic indication from some of the things that he’s said, like in his 60 Minutes interview where he talked about his intention to appoint a pro-life justice to align the court to overturn Roe. I think [of it] as a low-hanging fruit. He has every intention to repeal the Affordable Care Act, as much because it’s known as Obamacare [as because he wants] to try and deconstruct the legacy of President Obama. But that has implications that mean women who were accessing family planning and contraception as a preventative service with no co-pay will lose access to that coverage. We [will] only see an exacerbation of the things we were engaged in trying to prevent—like unplanned pregnancy and the need for abortion, which creates a societal dilemma. If you’re making abortion illegal and undermining the various things that will allow the prevention of that need, it can only be a situation that goes from bad to worse.

“If you’re making abortion illegal and undermining the various things that will allow the prevention of that need, it can only be a situation that goes from bad to worse.”

MJ: There are a lot of misconceptions around contraception and abortion care, not only in the general public, but also among our lawmakers. Do you think there will be an uptick in anti-science attitudes?

WP: There’s a saying that you can’t awaken somebody who’s pretending to be asleep. I’m full of clichés—I was raised by a Southern black woman and they had a saying for everything.

MJ: I get you, I’m from Tennessee and Mississippi. I grew up on those sayings, too.

There’s a willful ignorance. We indulge people who are willfully misrepresenting the facts. I don’t think those [anti-choice] congresspeople are as much benignly misguided as they are intentionally and willfully ignorant of the facts of reproduction. That lends itself very well to them being ideologically driven and carrying out agendas that, if they were to be really honest about the facts, would be a tougher sell. But I think anti-intellectualism can be rewarded by the outcome of the election that’s going to result in people being appointed who can reinforce that agenda. We’re going to see more of that willful ignorance if we don’t push back and fight. The worst thing we can do is to assume that the Electoral College [voting] resulting in the election of Donald Trump represents a mandate. It does not. He did not get the majority of the popular vote; that went to Hillary Clinton. That means those votes represent the consciousness of the nation, which is that abortion should be legal, that contraception and family planning are health issues and prevention, that a woman’s right to reproductive privacy is the law of the land and should remain such.

MJ: Have any of your patients expressed any fear since the election?

WP: I’ve seen patients once since the election, and then it was only abortion patients. But certainly, my friends and the common narrative is people are trying to shore up their own lives with regards to family planning and reproduction. I know people who were previously considering IUDs are considering them again. I know the requests for those kinds of visits are up. People are concerned about how much control over their reproductive lives they’re going to lose as a result of this election outcome.

MJ: Do you think this puts states that are down to one clinic, such as Mississippi, in even more danger?

WP: The fight in Mississippi will be more protracted. I’m the physician plaintiff in the lawsuit that keeps the Mississippi clinic open, and we prevailed twice in the 5th Circuit—once with just the three-judge panel and once with the full 5th Circuit panel. Despite that, the state tried to push it up to the Supreme Court, but the Supreme Court did not take that in lieu of the Texas case. So the definitive nature of the Texas case should have made things okay in Mississippi, but the state of Mississippi has decided to go forward. Now, I think their hope will be rekindled and renewed around the fact that potentially there will be an overturning of Roe, and there will be the appointment of a conservative justice who alters the balance of the court. There now will be a political hope based on the change in the presidential administration—hope that maybe wasn’t there before the election. But I don’t think anything will change immediately. President Obama, in his first remarks since the election, in order to reassure people and help them understand how government works, said the US government is like an ocean liner, not like a speed boat. It’s harder to turn around than people might think. Hopefully, many of the decisions have been structured in a way to make them resilient so they’re not as vulnerable to the capricious whim of political administrations.

MJ: So what would you say to women who are worried about what a Trump administration could do to their reproductive health?

WP: I just want to remind people that the task of those who support reproductive rights and reproductive justice didn’t change based on who is in the White House. We have leadership that is not supportive of what we’re trying to do, but the demand for justice shouldn’t be modulated. We can take that as a notion that we don’t know exactly what [Trump] is going to do, but we can’t afford to take a position of waiting around to see. We have to work under the assumption that the things that we fought hard for to protect women will be under assault, and we have to bring all our creativity and our energy to bear to preserve those things, no matter who is in the White House.