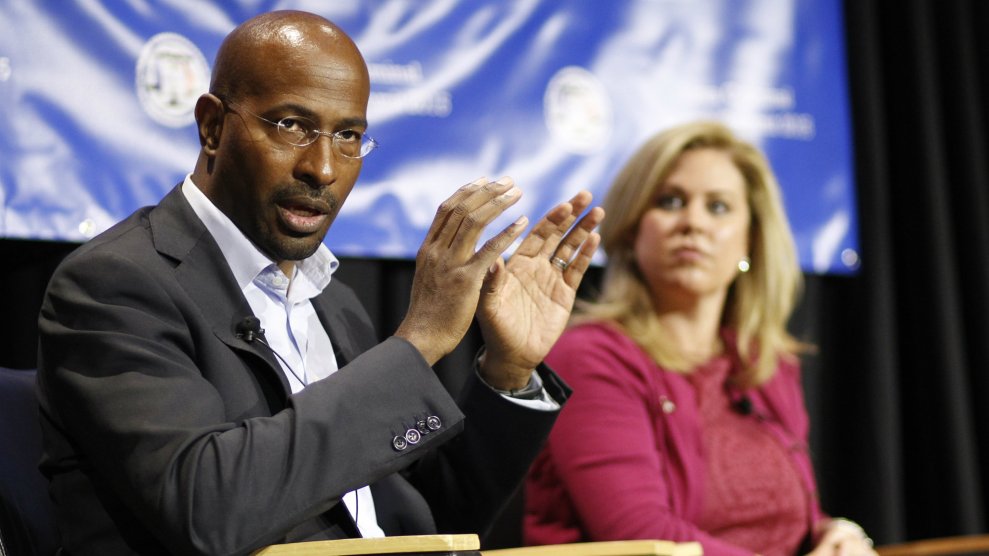 On Thursday, Van Jones, the CNN commentator and former adviser to President Barack Obama, shared his thoughts on what the mistrial in the case of former North Charleston police officer Michael Slager—charged with murder after shooting 50-year-old Walter Scott in the back as he fled—tells us about the state of race relations in the United States.

“It doesn’t say as much about the criminal justice system as it says about the persistence and prevalence of racism.”

“It doesn’t say as much about the criminal justice system as it says about the persistence and prevalence of racism—anti black racism—in society as a whole,” Jones told me. “It is inconceivable that a black person could shoot a white person in the back running away and not be put in prison—especially if it’s on video. Yet “they can’t find anything to convict this dude [Slager] of?”

In addition to murder, the jury in the Slager trial also considered the lesser charge of manslaughter. But as many as five jurors could not agree to convict even on that charge, the jury foreman told the Today Show on Thursday morning.

“In any other country,” Jones said, “that would be seen as evidence that you have an ethnic subgroup that is the victim of a double standard. And that’s what we have in this country.”

Jones was in San Francisco on Thursday addressing a conference on criminal justice reform. Dubbed the “Second Chance Summit,” it consisted of panels that included former offenders and the business owners who hired them, and sought to encourage other private employers to do the same. The conference was sponsored in part by Jones’ nonprofit, Dream Corps, part of a national bipartisan campaign to cut the nation’s prison population in half within 10 years.

Obama’s willingness to speak publicly about cases like Scott’s and other criminal justice issues, Jones told me, is a key part of the outgoing president’s legacy. It has been “a net positive in terms of getting the conversation taken seriously.”

Obama has “granted more clemencies than the past 11 presidents combined.”

Another major piece of that legacy: Obama’s posture toward incarcerated people. “He’s granted more clemencies than the past 11 presidents combined,” Jones said. “So that shows at least when you have the right kind of president, when the courts and the Congress get it wrong, the president can help get it right.” Obama’s visit to a federal prison last year—the first by a sitting president—for instance, was an important moment, Jones said. But more significant was “the fact that President Obama, who is attacked and criticized for inhaling and exhaling, was never attacked by the right wing for going to visit a prison…That was a signal from the right that the water is safe” for bipartisan criminal justice reform.

But private interests will advance criminal justice causes regardless of what the incoming president decides to do, Jones said: “If you look around the world, what you see is that state governments are less efficient and less able politically to do what needs to be done. And so you’re seeing people who want to be change-makers moving from the public sector into the private sector and doing social impact, finance, socially responsible business, etc. And that tracks where the opportunities actually are for doing good. What the Trump phenomenon does is accelerate an existing trend.”

Last month, Mother Jones’ editor-in-chief, Clara Jeffrey, debriefed Jones more broadly about what a Trump presidency might mean for America. You can read that interview here.