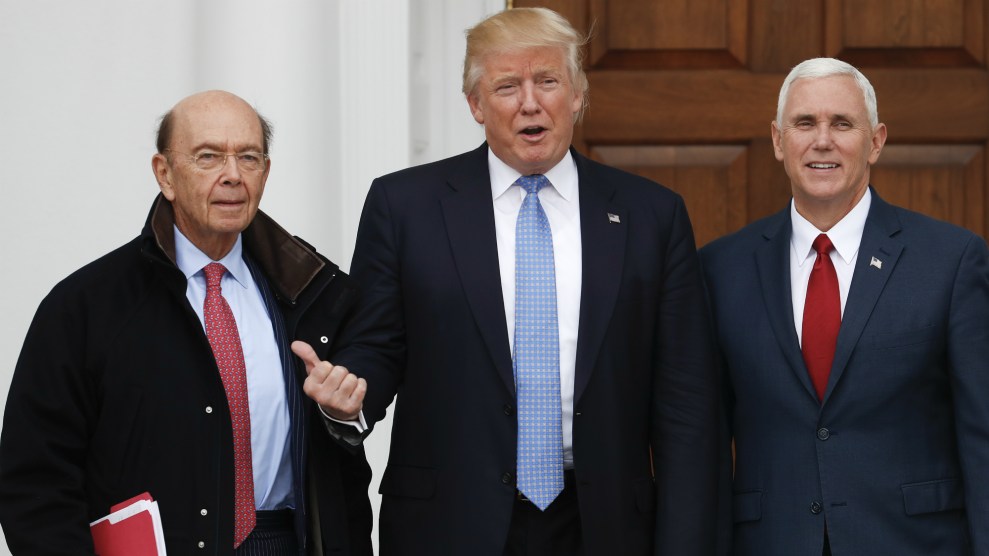 In October—two days after the Department of Homeland Security and the Office of the Director of National Intelligence declared that Russia was responsible for hacking Democratic targets to influence the 2016 election—the Trump campaign zapped out a press release claiming that Hillary Clinton was actually the candidate in the race with “close ties” to Russian leader Vladimir Putin and that she had “sold out American interests to Putin in exchange for political and financial favors.” One piece of supposed evidence for this claim was that Viktor Vekselberg, a Russian billionaire oligarch and Putin ally, made a donation, through his company, to the Clinton Foundation.

Vekselberg is one of the richest men in Russia, and he has been a Putin supporter who was placed in charge of a major Russian initiative to bring high-tech business into the country—an effort criticized by some, including the Trump campaign in this press release, as partly designed to swipe advanced technology, sensitive military and civilian research, and other secrets from the United States. (And his company did contribute between $50,000 and $100,000 to the Clinton Foundation, according to the foundation’s website.) But even though Trump the candidate asserted that Clinton’s association-via-foundation with Vekselberg was a problem and a sign she was too cozy with Putin, Trump the president-elect has welcomed into his administration a businessman with a much tighter and more financially significant relationship with Vekselberg: Wilbur Ross, the billionaire investor who has specialized in distressed assets and who is now Trump’s pick for commerce secretary.

For the past two years, Ross has been a business partner with Vekselberg in a major financial project involving the Bank of Cyprus, the country’s largest and most significant financial institution. A financial crisis in 2013 led to the bank’s collapse and eventual bailout. The bank had held billions in deposits from wealthy Russians—some of it presumably dirty money or funds deposited there to escape Russian taxation—and during its restructuring, a large amount of these deposits were converted into shares, giving Russian plutocrats a majority ownership (on paper) of the bank. The idea of Russians gaining control of a European bank unnerved European financial powers. But in the summer of 2014, Ross led a 1 billion euro takeover of the troubled bank in a deal that offered Russian shareholders a buyout. (Ross had previously bought a stake in the Bank of Ireland during an earlier European debt crisis—a move that turned out to be profitable.) Still, the Bank of Cyprus would not be freed of Russian influence. Shortly after Ross’ deal, the bank announced that Vekselbergs’ conglomerate, the Renova Group, had become the bank’s second-largest shareholder.

Vekselberg and the Renova Group have a history of close ties to the Kremlin, and Vekselberg has been publicly regarded as a Putin-endorsed oligarch. One pet project of Vekselberg was the acquisition and repatriation to Russia of Fabergé eggs. It was an expensive endeavor; Vekselberg told an interviewer in 2013 that he spent more than $100 million to acquire the eggs, which once were owned by the late Malcolm Forbes, when they came up for sale in 2004. Apparently his egg-chasing bought him goodwill from the Kremlin. He noted that Putin had personally thanked him for this act: “I’ve seen the emotion of our president. It’s important to him that a Russian citizen has brought back this important collection.” During the Putin years, Vekselberg has expanded his business empire. He was once accused in a lawsuit of using gunmen to gain control of a Siberian oil field.

In October 2014, Wilbur Ross unveiled a new board of directors for the Bank of Cyprus. He would be one of the members of the board and so would Maksim Goldman, a Renova executive representing Vekselberg’s interests. Also on this board was Vladimir Strzhalkovskiy, a previous board member whom Russia Today a year earlier had identified as a Putin associate and former KGB official. Ross and Vekselberg also recruited Josef Ackermann, a former head of Deutsche Bank, to come in as chairman. This was another Russian connection. As Bloomberg reported, “Ackermann, a regular visitor to the Putin-hosted St. Petersburg International Economic Forum while head of Deutsche Bank, is a director of Renova Management AG, an industrial holding company controlled by Vekselberg, 57, who was a beneficiary of Russia’s privatization program of the mid-1990s.” Bloomberg also noted, “Ross, whose group owns 17 percent of the bank, plans to share the vice-chairman post with Vladimir Strzhalkovskiy, who served with Putin in the KGB in the 1980s.” So here was Ross teaming up with Russians in Putin’s orbit to make a buck—or, he hoped, millions of them.

At the time, Ross told CNBC that these management changes positioned the bank for a revival: “I think Cyprus has a very good potential for turnaround, if for no other reason than that it has tremendous natural gas reserves…given that Cyprus only has fewer than a million people in population, this could be a very, very dramatic impact on that economy.” (Ross also headed a group that invested 1.3 billion euros in the third-largest bank in Greece.) About a year later, Ackermann said it would take another two or three years to revive the bank. The Bank of Cyprus website currently lists Ross and Renova’s Goldman as its vice chairmen, Strzhalkovskiy is no longer on the board, according to the website. (This year, he joined the board of an agriculture bank totally owned by the Russian government, according to SKRIN Market & Corporate News.) Last month the Bank of Cyprus moved to be listed on the stock market in London. Meanwhile, Vekselberg’s relationship with Putin may have become complicated. In September, Russia’s FSB security service raided the offices of companies the oligarch owns and arrested two top executives on corruption charges.

Asked about Ross’ dealings with Vekselberg, the Trump transition office did not respond to a request for comment.

With Trump tapping Rex Tillerson, the chief executive officer of ExxonMobil, to be his secretary of state, one issue looming over the confirmation process for Tillerson is his connection to Putin and Moscow. He boasts a long-term relationship with the Russian strongman and has cut huge deals with Russia for ExxonMobil. According to a news report this weekend, Tillerson is the long-time director of a US-Russian oil company based in the tax haven of the Bahamas. In 2013, he was awarded Russia’s Order of Friendship. He has opposed US sanctions against Russia that get in the way of more oil deals between ExxonMobil and Putin. And these ties between Tillerson and Putin have irked several Republican senators, including Sen. Marco Rubio of Florida, who recently tweeted, “Being a ‘friend of Vladimir’ is not an attribute I am hoping for from a #SecretaryOfState.”

Ross’ own Russian associations also warrant scrutiny from senators during his confirmation proceedings. After all, he worked with a major Russian oligarch and shared a board position with a former KGB official close to Putin, as he took over a foundering bank that recently had been sloshing with Russian money. What are his views on imposing sanctions against Russian financial institutions and oligarchs? (Cybersecurity experts say one possible response from the US government to the Russian meddling in the 2016 campaign is targeting oligarchs and bankers close to the Kremlin.) Just months ago, Trump and his minions were asserting that a relatively modest Vekselberg donation to the Clinton Foundation reflected poorly upon Hillary Clinton and indicated she was in cahoots with Putin. Ross, though, has been in bed (financially) with this oligarch for the past two years in an arrangement involving over $1 billion. By their own standard, what does that mean? The Senate should seek an answer to that question.