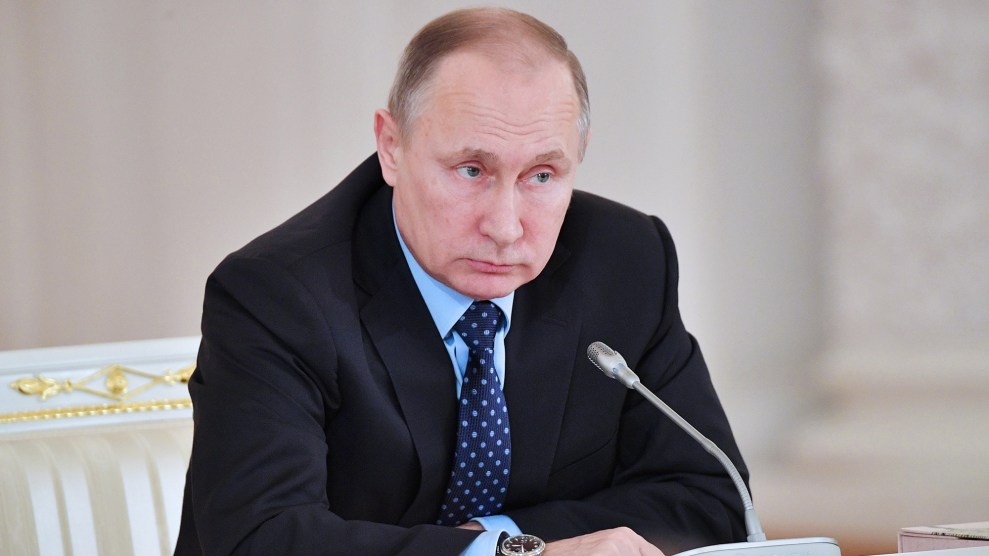 Russia's President Vladimir Putin looks on at a State Council meeting at the Moscow Kremlin. Nikolsky Alexei/TASS via ZUMA Press

The Obama administration’s actions come after revelations that Russia interfered in the November presidential election, although senior administration officials cautioned on a call with reporters Thursday that there is no evidence suggesting Russia was able to interfere with the actual vote. Once it became evident that Russia had hacked into the Democratic National Committee’s email server, senior administration officials said they worked to make sure voting would not be compromised, and they said were successful in those efforts.

The executive order is also a response to an increase in harassment toward US diplomats in Russia. Senior administration officials cited the assault of a US diplomat by a Russian police officer that was broadcast on Russian television in July. Officials also said the safety of US diplomats was compromised when some diplomats’ personal information was broadcast on Russian television. Russia has accused Washington of similar harassment toward its diplomats.

“We see this as: There are facts, and then there are the things Russia says,” an official said when asked about Russia’s denial of its involvement in the cyberattacks.

Another official said that the “pattern of Russian harassment is unprecedented for the post-Cold War era” and that it’s been steadily increasing for about two years now.

Officials acknowledged that not all the actions being taken are made public, and their efforts will continue in the coming months. They also acknowledged that when the Trump administration takes over in January, the new president could walk back this effort, but that such an action would be ill-advised. “It wouldn’t make much sense to invite back in Russian intelligence agents,” one senior administration official said.

Read the report issued Thursday by the intelligence community on Russian cyber activity: