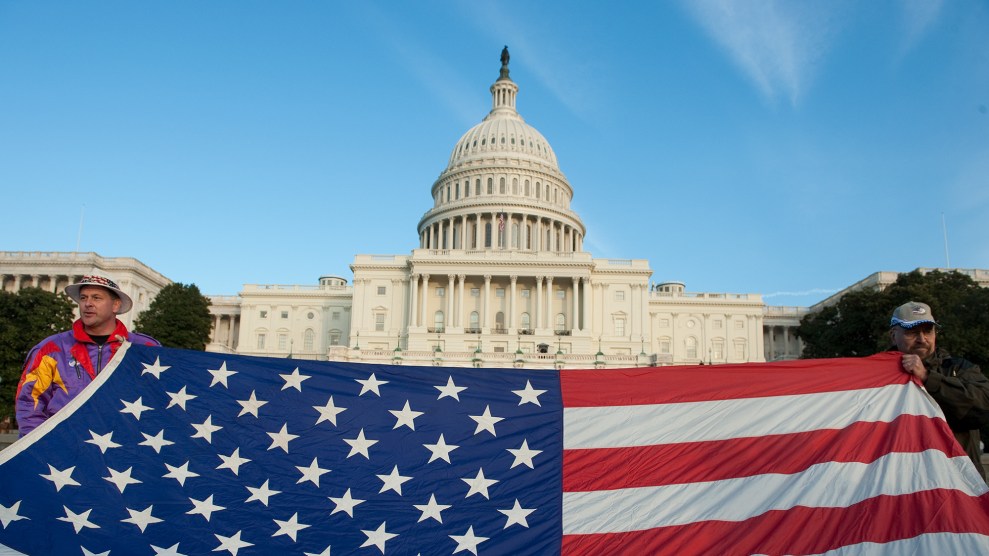 Since the election, progressives have been huddling on social media to plan ways to stymie, if not stop, President-elect Donald Trump. Last week, new inspiration came in the form of a link leading to a 23-page Google document titled “Indivisible: A Practical Guide for Resisting the Trump Agenda.” In clear, confident prose, it lays out a well-reasoned, step-by-step strategy for building a grassroots movement to challenge Trump and his Republican allies in Congress. And it openly acknowledges that its playbook is cribbed from a surprising source: the tea party.

The guide was put together as a side project of a largely anonymous group of former Democratic congressional staffers who sought to help fellow progressives do something more constructive than signing online petitions. “Hill staffers don’t have a lot of skills—that’s why so many become lobbyists,” explains 31-year-old Ezra Levin, the collaboration’s unofficial spokesman, whose day job is at an anti-poverty think tank. “The one thing that we have is knowledge of how Congress works.”

Some of that knowledge was earned the hard way. “We know what worked when we were in Congress. We saw the tea party adopt a very effective strategy that effectively slowed down Congress and defeated many progressive priorities,” says Levin, who previously worked as deputy policy director for Rep. Lloyd Doggett (D-Texas). “Indivisible” explains how the tea party did it, and how progressives can do the same—without the vitriol. (“The Tea Party’s ideas were wrong and their behavior was often horrible,” it states. “We are better than this.”) The guide explains how to effectively pressure lawmakers—exploiting their political self-interest to get them to do the right thing—or at least not do the wrong thing.

From “Indivisible: A Practical Guide for Resisting the Trump Agenda.”

Since it was published, the guide has been read thousands of times. (Exactly how many isn’t clear; Google doesn’t track how many people view public documents. You can now download it here.) It’s been shared by liberal celebrities such as former Labor Secretary Robert Reich and Star Trek‘s George Takei. “There have been some high-profile folks—it’s nice to see that,” Levin says. “But I think that’s less important and heartwarming than the people in rural districts in California or Georgia or Florida saying, ‘Oh my gosh this is exactly what I’ve been looking for.'”

Levin spoke more about the two-pronged plan to challenge a newly elected president—and why you shouldn’t bother contacting members of Congress who don’t represent you.

Mother Jones: How did the group come up with this idea?

Ezra Levin: We thought our value-add to this conversation is to demystify Congress for everybody else. The tea party had a lot of nasty tactics that were needlessly aggressive and petty and scary. But they proved it is indeed possible for a committed, relatively small number of folks across the country to make Congress listen to them and to slow and stop an agenda. The way we see it, there is a much larger group of people around the country now that feel that way than there was in 2009 and 2010. Progressives are the majority; we won the popular vote by a long shot and Donald Trump and the congressional Republicans representing mainly rich old white men are a minority. If we stand up together and use the effective strategies and tactics the tea party used, we believe we can stop them.

MJ: What in particular do you think the tea party did effectively?

EL: We point to a two-pronged strategy that made the tea party successful. One, you have to be local. You have to focus on your local members of Congress. Looking around at all these great groups that have popped up, we’ve seen people say, “Hey, contact the committee chair. Contact the leadership or this member of Congress.” What we knew from our time on the Hill is that members of Congress care about reelection most of all. And that means they care about their constituents. So you have to be a constituent to make your voice heard.

“The tea party had a lot of nasty tactics. But they proved it is indeed possible for a committed, relatively small number of folks across the country to make Congress listen.”

The second strategy that the tea party smartly embraced was one of being almost entirely defensive. They consciously decided not to figure out which of their really abominable conservative policy priorities to prioritize. Instead, anything that came out of the Obama White House they were against. What they recognized is that when you’ve lost the White House and the House of Representatives and the Senate, you’re not setting the agenda anymore. We progressives find ourselves in a similar situation now. So when you’re talking to your member of Congress, your leverage is responding to whatever is on his or her plate right now.

This does not mean abandoning a vision for the future. This guide is really meant for the local activists on the ground who are trying to make their voices heard. The hard truth is that they are going to have to respond to the Republican, very conservative agenda that is being set.

MJ: Do you think that Republican members of Congress listen to their progressive constituents?

EL: The answer is absolutely yes. The bottom line is that every single member of Congress has to get voted into office every two or six years. That means they need to look really good in their home district and state. That means good local press. That means people in their district thinking, “Man, I really don’t like Congress, but I like Senator Bob.” I really do not think there is a serious split between Republicans and Democrats in Congress in how responsive they are to constituents.

MJ: On the flip side, you’re telling progressives in blue districts or bubbles that they shouldn’t spend their time calling Texas or North Carolina; they should also focus on their local members of Congress. Why is that?

EL: That’s absolutely right, for the same reason. When someone is running for reelection in Texas, they’re not looking for votes in California or New York. It is really crucial that folks focus on their own representatives. If you call or write a member who does not represent you, I can tell you that contact is going to be a waste of time. You might as well just talk to yourself in your living room.

“Stiffening the spine of progressive members of Congress is crucial.”

What if your members of Congress are great? Another crucial thing the tea party did really well is to focus in on the folks who are more or less on your side, and make sure they are as bold as possible. The way the most damage will get done in Congress during the next administration is when Democrats go along with the authoritarianism or racism or corruption being proposed by the other side. Stiffening the spine of progressive members of Congress is crucial.

MJ: What do you see as the best-case scenario for this strategy? Will it take the sting out of Trump’s policies or will it stop them in their tracks?

EL: A mix of both. The bottom line is that our ideas are supported by more Americans than theirs. We’re standing for more Americans than they do. To the extent that we can shine a light on the bad things being done, that’s going to have a positive impact. And to the extent that we can slow down the things they’re really going to try to ram through Congress, that’s going to have a positive impact, too. Their goal is to quickly pass as much bad legislation and regulatory changes as possible because they know their ideas aren’t popular and they know they don’t represent the vast majority of the country.

MJ: Do you think Trump and Republicans are more vulnerable now than Obama and Dems were in 2009 during the rise of the tea party?

EL: Structurally, that is clearly the case. Obama had a mandate for change and Trump clearly does not. The Democrats had much larger majorities in Congress when Obama first took office. Our position now is actually stronger—though it’s hard to imagine. But it’s only stronger if people act. If people don’t get as engaged as the tea party was, we’re going to lose.

MJ: A lot of people are talking about how we’re seeing many of our democratic norms being eroded by Trump. If that continues, does this approach remain effective? Or does it depend on the way we’ve always done things, like members of Congress responding to constituents?

EL: That’s a scary question and I think it’s one of the reasons folks are so engaged right now. A lot of people are worried that many of our rights and privileges we’ve come to expect as part of the American democratic process will be abandoned or restricted in some way. That is a valid fear and it makes it all the more important that people get together now to prevent any possible damage.