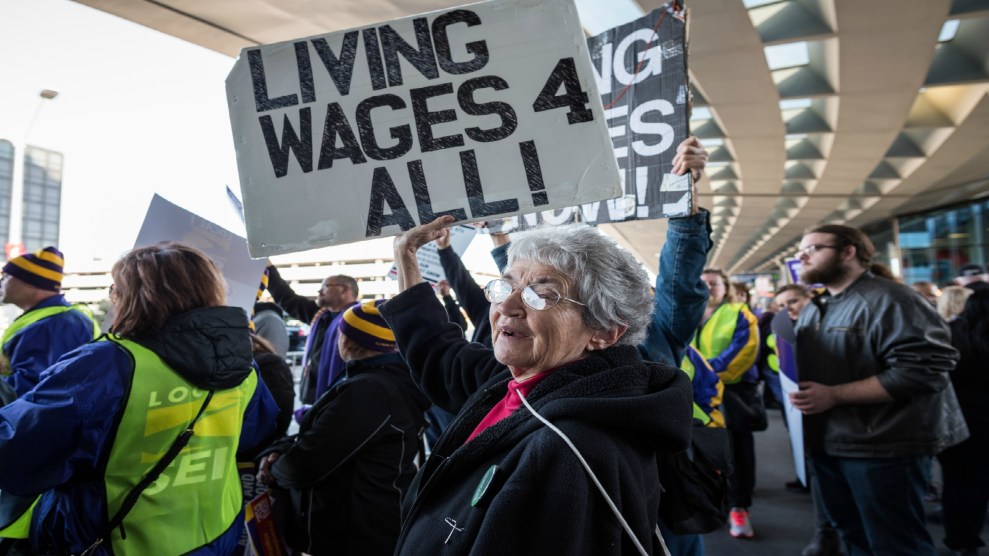 Airport workers on strike and their supporters hold a protest seeking a $15 minimum wage at O'Hare International Airport in Chicago on November 29, 2016.Sipa via AP Images

From the window of his university office in Louvain-la-Neuve, Belgium, philosophy professor Philippe Van Parijs—considered by many to be Europe’s most prominent advocate for the idea that the state should provide a regular income to every citizen—can see the mailbox where he sent off invitations to the first “basic income” conference more than 30 years ago. “I’m quite amazed by the seed we threw on the ground now,” he says.

After decades of obscurity, the idea is suddenly in fashion. Politicians around the world are interested and a handful of governments, such as Finland and the Canadian province of Ontario, are planning or considering basic-income pilot projects.

But the idea of basic income has been around for more than 200 years, rising on waves of political and economic turmoil only to disappear in calmer times. Here are some of the highlights of its long, turbulent history: 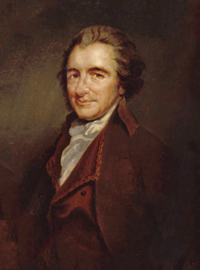 1795-97: As the Industrial Revolution widened the gap between rich and poor, land reform was seen by some as an answer to social inequity. Thomas Paine, who two decades earlier had written Common Sense, drafted Agrarian Justice in the winter of 1795 and 1796. The earth by right belongs to all people, Paine argued, but the private ownership of land has stripped us of this “natural inheritance”; at 21 years old, citizens should be compensated for their loss with a sum of 15 pounds. A year later, fellow British-born radical Thomas Spence responded with a pamphlet titled The Rights of Infants. Writing in the character of a woman (“because the men are not to be depended on”), Spence said society should be organized into parishes that would lease out all houses and lands and then, after the community’s expenses had been paid, distribute their remaining funds equally among members.

1848: Revolutions erupted across Europe, Karl Marx penned The Communist Manifesto, and Joseph Charlier, a Belgian variously identified as a “writer, an “accountant,” or a “merchant,” wrote The Solution of the Social Problem, now considered the first fully fledged proposal for basic income. His book received little attention and disappeared until two European academics stumbled upon it 150 years later and wrote an article that established Charlier’s place in history.

Late 1910s and 1920s: Social movements demanded a radical redistribution of resources after the devastation of World War I. In England, two young Quakers published a pamphlet calling for a weekly “state bonus” for all citizens of the United Kingdom. The idea gained a following and was considered by the Labor Party in 1920 but ultimately rejected. 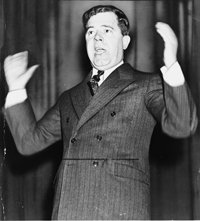 1930s: The Great Depression swept across the industrialized world, wiping out jobs and sending poverty soaring. In 1934, populist (and famously corrupt) Louisiana Sen. Huey Long addressed the country on the radio and called for the confiscation of wealth from the richest and guaranteed annual incomes for all families, a program he called “Share Our Wealth.” The movement was cut short by Long’s assassination in 1935. That same year, President Franklin D. Roosevelt signed the landmark Social Security Act, creating the anti-poverty program known as Aid to Families with Dependent Children—or “welfare.”

1940s: Conservative economists Milton Friedman and George Stigler, both future Nobel laureates, developed the idea of a “negative income tax” (NIT), essentially a guaranteed income administered through the tax system. Low-income filers would receive checks from the government rather than pay taxes; as their earnings increased, so would their tax burden, but also the total amount the filer took home. Friedman’s plan may come as a surprise to his small-government acolytes, but the economist firmly believed an NIT would address poverty without adding to the state bureaucracy he reviled.

1962-63: Basic income went mainstream as attention turned to poverty, unemployment, and the massive northern migration of African Americans. In 1963, critic Dwight Macdonald argued for the necessity of a guaranteed income for all families in an influential review of Michael Harrington’s The Other America in The New Yorker. Friedman made the case for an NIT in his book Capitalism and Freedom, while on the left, economist Robert Theobald outlined his “Basic Economic Security plan”—a proposal strikingly similar to modern basic-income schemes. Economists in the Kennedy administration embarked on a federal anti-poverty campaign, which, after Kennedy’s assassination, became Lyndon Johnson’s War on Poverty.

1964-68: Racially charged riots, with demands for economic justice, erupted in cities across the country. In a 1967 speech, Martin Luther King Jr. called for a guaranteed minimum income for all people. Protests organized by welfare rights groups raised the pressure on government to address poverty and guaranteed income gained popularity within the administration. In a 1966 report, Johnson’s Council of Economic Advisers said a negative income tax “would be the most direct approach to reducing poverty” and “deserve(s) further exploration.” By 1968, a surprising cast of characters, including heads of major companies, had lent support to the idea. John Kenneth Galbraith and Paul Samuelson joined more than 1,200 economists in signing a statement advocating a “national system of income guarantees and supplements.”

1969-71: Richard Nixon repudiated guaranteed income on the campaign trail, but after his election, he was persuaded that it might be the best solution to the so-called “welfare mess.” In a televised address in August, Nixon presented his Family Assistance Plan (FAP). While Nixon insisted that it was “not a guaranteed income” because it included work requirements, the plan owed its central tenets to the guaranteed-income debate and would have made a radical break with past poverty policy. Families headed by both working and unemployed adults were eligible, erasing a historic line between the “deserving” poor (the old, disabled, and mothers with young children) and “undeserving” (people who are physically able to work). 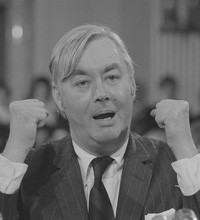 In 1970, Nixon’s bill easily passed the House but stalled in the Senate Finance Committee, which was chaired by Huey Long’s son, Sen. Russell Long of Louisiana. Daniel Patrick Moynihan, a proponent of the plan within the administration, wrote in a memo to Nixon that for Southern committee members “it would very likely mean the end of those political dynasties built on poverty and racial division.” Nixon’s plan died in committee. A revised version met the same fate the following year.

Late 1960s to the early 1980s: Beginning in 1968, the US government ran four groundbreaking negative income tax trials involving nearly 9,000 families. In Canada, between 1974 and 1979, the government turned the tiny, isolated town of Dauphin into a living laboratory where qualified residents received a guaranteed annual income equivalent to about $15,000 for a family of four. (The Canadian data was never analyzed; a determined academic discovered the documents in the early 2000s, packed away in 1,800 dusty boxes in a Winnipeg warehouse.) The US experiments, which were primarily intended to study an NIT’s impact on labor, found only small reductions in work effort. But researchers reported that the trials in Seattle and Denver appeared to increase the rate of marriage dissolution by 40 percent to 60 percent. Although the results were later disputed, the damage was done. Moynihan, now a senator and once an avid supporter in Congress, renounced guaranteed income. But Nixon’s welfare reform efforts did have a lasting impact: Supplementary Security Income (income support for the aged, blind, and disabled) and the Earned Income Tax Credit (an NIT applied solely to the working poor) were enacted in 1972 and 1974. 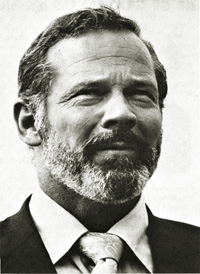 1982: In 1976, as the Trans-Alaska Pipeline neared completion, Jay Hammond, a professional hunter turned governor, proposed a system of dividends to be paid to all Alaskans from a state oil fund established in 1976. The program dispensed its first dividends in 1982, in effect becoming the first basic-income system in the United States. Last year, the state sent checks of $2,072 to nearly 650,000 residents. In June, current Gov. Bill Walker capped payments at $1,000 per person this year to help cover Alaska’s budget deficit.

Early 1980s to 1990s: In 1982, Philippe Van Parijs, then a young Belgian academic losing sleep to fears of unfettered capitalism, landed on the idea of a basic income. He found like-minded thinkers across Europe, and in 1986 they scraped together enough money for the first basic-income conference. At that meeting, the Basic Income Europe Network (“BIEN,” or “good” in French) was born. In 2004, at the insistence of a growing international contingent, the organization was renamed the Basic Income Earth Network.

1997: Mexico launched a large-scale conditional cash transfer program (CCT), or a system of direct cash payments to poor households, followed in 2001 by Brazil and Colombia. While CCTs are not identical to basic income—the grants come with requirements, such as sending children to school, and are only given to the poor—they also operate on the assumption that people can be trusted to spend cash grants wisely. CCT programs spread rapidly across Latin America in the early 2000s and on to parts of Asia and Africa. Tens of millions of impoverished people worldwide now receive financial assistance through CCTs funded by governments, international aid organizations, and nonprofits. 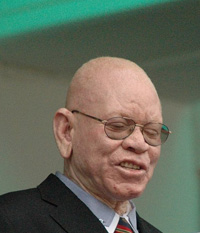 2006-11: At a BIEN conference in Cape Town, South Africa, Zephania Kameeta, then head of the Namibian Evangelical Lutheran Church, shouted in frustration: “Words! Words! Words!” Kameeta was fed up with the endless scholarly discussions and lack of progress, so after the conference he set about organizing a real-life basic-income trial. By early 2008, a basic-income coalition assembled by the bishop had launched a pilot project in an impoverished settlement. Two years later, a group of researchers began a series of basic-income experiments in rural India involving more than 6,000 individuals.

2015-Present: The Canadian province of Ontario pledged to roll out a basic income trial in 2017, with the Dutch city of Utrecht to follow in 2017. The Finnish government mulled a pilot project with up to 10,000 participants. In the United States, where Silicon Valley bigwigs were among basic income’s most vocal supporters, the startup incubator Y Combinator in June announced plans to start a pilot project this year in Oakland, California, that will distribute up to $2,000 a month to a few dozen people. Another private enterprise, the US-based nonprofit GiveDirectly, is planning an extended trial in Kenya that will span 10 to 15 years and involve at least 6,000 participants.

2016: On June 5, Switzerland became the first country to vote on, and roundly defeat, a national basic income. Opponents argued that the policy would have discouraged work and undermined the Swiss economy. But for basic-income advocates, the referendum was remarkable. Just a few decades ago, Van Parijs remembers, it was “difficult to find 30 people who had heard of the idea.”