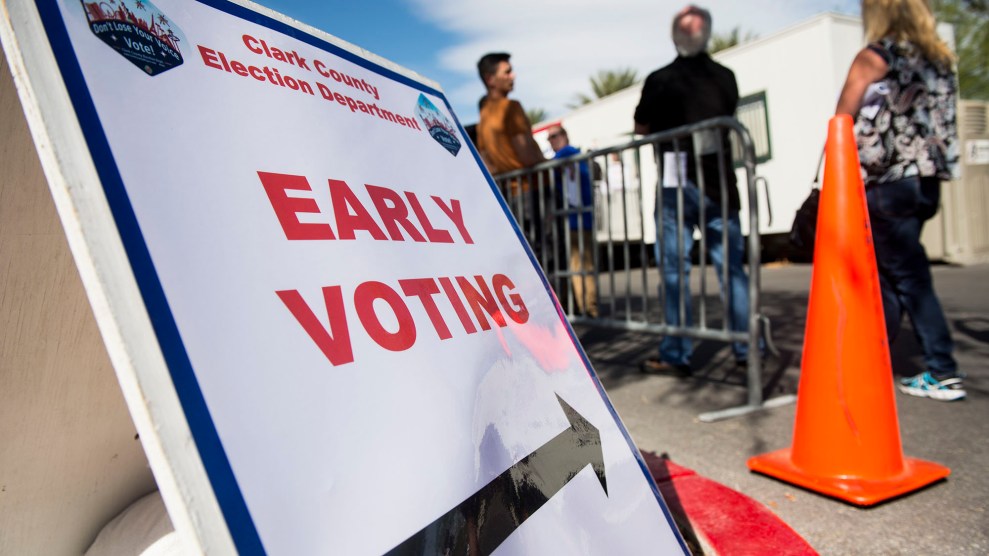 On Election Day, the Trump campaign filed a court challenge in the swing state of Nevada alleging ballots were cast illegally during early voting in heavily Latino Clark County. Due to surging Latino turnout in the county, which includes Las Vegas, certain polling sites were kept open to accommodate everyone who had lined up to cast a ballot. It’s a legally dubious strategy that seems aimed at laying the groundwork for claims that the election was rigged. Veteran Nevada reporter Jon Ralston dubbed the Trump team’s gambit the “‘Hispanics voted too much’ lawsuit.”

Nevada law allows anyone in line when the polls close to cast their ballot. But the Trump campaign alleged in a complaint filed with the Nevada secretary of state and the Clark County district court that early voters got in line after the polling locations technically closed.

At a hearing Tuesday, the Trump campaign asked that ballots from those early voting locations be impounded as evidence after the election. (Clark County responded that the Trump campaign was asking it to preserve records that would ordinarily be preserved anyway.) But a Clark County district judge denied the campaign’s request to have the early votes quarantined, as well as other record preservation requests from the campaign. The Trump campaign’s complaint with the Nevada secretary of state is still pending.

Ralston broadcast his dismay and incredulity over the case Tuesday.

That was the Trump campaign in a nutshell in that NV court hearing:
Unprepared.
Loony logic.
Lack of knowledge.

The whole premise of this suit is undermined by:
1. Different rules for early voting lines
2. Secret ballot
3. Desire to have people vote