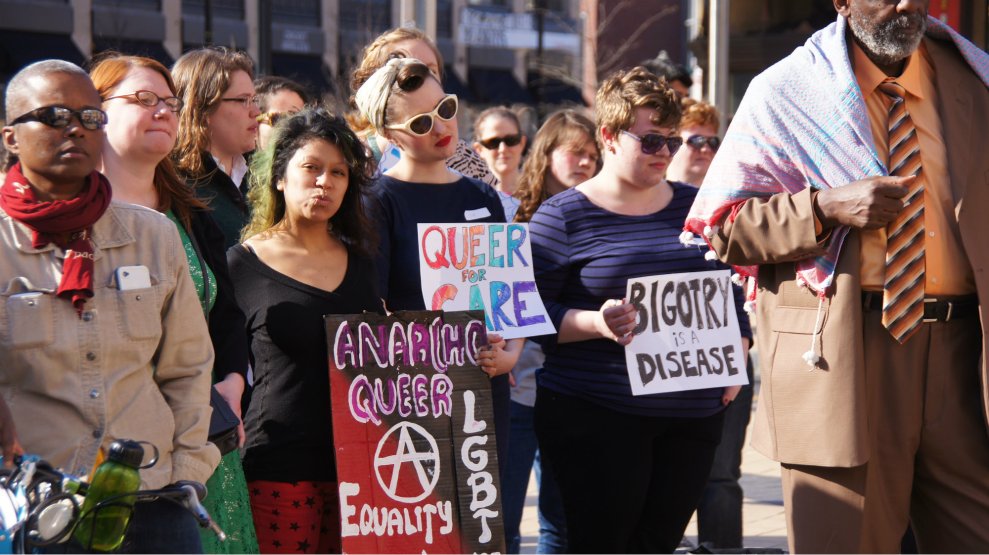 Trans Hotline, a nonprofit that focuses on suicide prevention for transgender people, has received at least five times the call volume it normally gets. And the Trevor Project, the nation’s only LGBT youth-focused suicide prevention hotline, received more calls, texts, and online chats on Wednesday than it’s gotten on a single day in four years, more than double its normal daily volume.

“We started getting increased call volume at about 10 p.m. on election night, and it hasn’t slowed down at all,” said Gretta Martela, director of Trans Hotline, on Thursday afternoon. “In fact, it’s on the rise still.” The hotline receives about 100 calls a day normally. In the 24 hours prior to speaking with Mother Jones, Martela said it had received 523 calls.

Callers expressed fear that many of the gains in LGBT rights made under the Obama administration—like access to trans-related health care—will be lost under Trump, Martela said. Medical experts have said that access to appropriate hormones and other treatments for gender dysphoria can be essential to a transgender person’s physical and mental health. “The Republicans are looking to repeal Obamacare,” Martela said. “So a lot of people are looking at losing their health care coverage.”

Callers were also concerned about a potential Supreme Court ruling that could deny them access to bathrooms that match their gender identity, and a rise in anti-trans hate crimes. This year was the most violent on record for trans women of color, Martela noted.

Steve Mendelsohn, deputy executive director of the Trevor Project, said queer youth who contacted his hotline shared similar concerns. “Ninety-five percent of them tell us that they’re worried about the election results,” he said. “And they’re telling us that they’re feeling anxious and scared…They talk about things that came up during the election campaign. So a fear that perhaps gay marriage will be reversed. Or that conversion therapy will be promoted. Or that their insurance might be taken away.” The Trevor Project is training many more volunteers to help field the increasing volume of calls, Mendelsohn said.

Trump repeated on the campaign trail that he’d be great for the LGBT community, but his positions—and his running mate’s anti-gay track record—suggest otherwise. Trump has said he would “strongly consider” appointing judges to the Supreme Court who would overturn the court’s standing ruling on marriage equality. Trump backed North Carolina Gov. Pat McCory as he faced backlash for signing a bill that banned transgender people from using the bathroom that matched their gender identity.

Vice President-elect Mike Pence has a longer record of opposing LGBT rights. Last year, the Indiana governor signed a bill permitting businesses to cite religious beliefs as a reason to deny service to gay and lesbian customers. And he once advocated federal funding for gay conversion therapy—a practice that has been discredited by the American Psychological Association as harmful and that’s banned for use with minors in five states and the District of Columbia.

Nearly 30 percent of lesbian, gay, and bisexual youth have attempted suicide, according to the Centers for Disease Control and Prevention, compared with less than 7 percent of straight youth. For transgender people, that number is 41 percent, according to a 2011 survey by the National Center for Transgender Equity and the National Gay and Lesbian Task Force. Queer and transgender youth are also more likely to be the victims of hate crimes.

Martela, who is transgender and gay, said she has a unique stake in a potential GOP crusade against LGBT equality because her wife is from India and in the United States on a visa. “She’s allowed to be in the country because we’re married,” she said. “If our marriage is overturned and we get increased [immigration] enforcement like they’re promising, she could be sent back to India.”