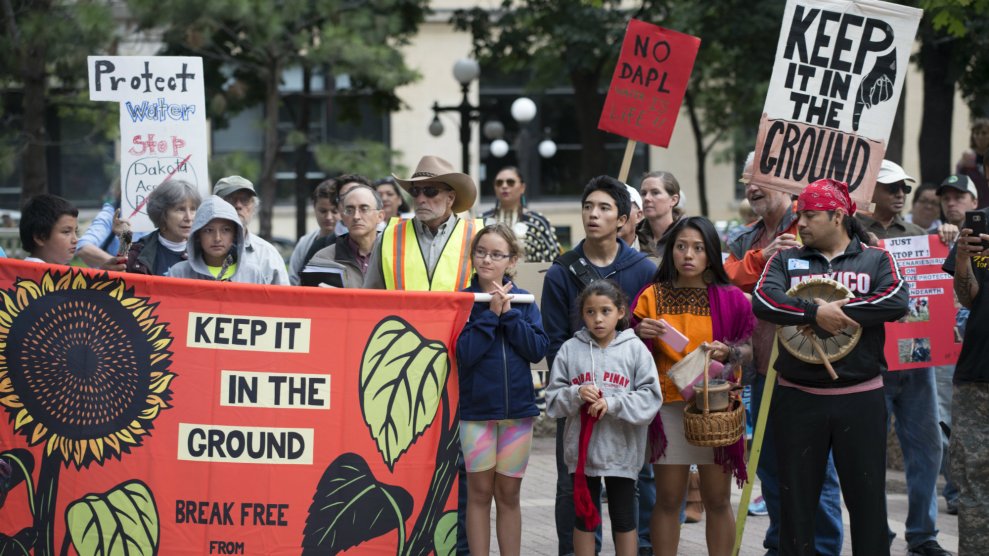 A protest against the Dakota Access Pipeline in Standing Rock, North DakotaFibonacci Blue/Flickr

Two key flags in a viral Facebook post about the escalating oil pipeline protests at Standing Rock, North Dakota, indicate it is likely a hoax, according to Snopes.

Meanwhile, my colleague Wes Enzinna, who has been reporting from the protests over the Dakota Access Pipeline, says there is scant evidence at the protest site that the story behind the post is true.

The bizarre Facebook post alleges that law enforcement officials at Standing Rock are using the Facebook “check-in” tool to keep track of people who are at the protests and to make arrests. Thousands of demonstrators, including members of the Standing Rock Sioux Tribe, are challenging the construction of the Dakota Access Pipeline. Protesters say the project threatens the area’s water supply and destroys sacred Native American sites.

The post asked protest supporters on Facebook to use the social-media platform’s check-in tool at Standing Rock to say they were physically at the protest site, regardless of where they were actually located. This, the post claimed, would confuse law enforcement officials who were trying to track how many Facebook users were at Standing Rock. Plus, the check-ins were a show of solidarity that supporters could make from the comfort of their own computers. More than 100,000 people have checked in at the protests since Friday, according to Time.

As FB page is used by police to target activists, check in at Standing Rock Reservation in solidarity with #NoDAPL.https://t.co/oVOeHY9fV3 pic.twitter.com/4T8hiIWYWG

Snopes writer Kim LaCapria said the post is probably a hoax. Snopes, which investigates viral claims in the news and on social media, designated the allegation that police at Standing Rock were tracking protesters via Facebook check-ins as “unproven.” This means Snopes couldn’t determine whether the claim was true or not.

Police officers are not using Facebook check-ins to track protesters, the sheriff’s department in Morton County, North Dakota, told my colleague Wes Enzinna, who has been reporting from Standing Rock.

It would be difficult to prove whether police were targeting people using Facebook check-ins, LaCapria told me. But there are two things in the post that make it less likely. First, it’s not logical. Even if police were tracking protesters on Facebook, it doesn’t make sense that more people checking-in as a response would help the situation.

“If that really was an issue—let’s say that people were getting arrested or taken into custody because of Facebook check-ins, then the obvious thing to do would be not check in,” LaCapria said. “It wouldn’t help as much to have people checking in as it would to have nobody checking in.”

“Somebody will go on Facebook and tell a story that’s, like, 100 percent sympathetic. They’re so obviously the person you would side with,” LaCapria said.

The viral Standing Rock post fits that bill—but it also deviates from the kinds of rumors that normally go viral in a couple of ways, she added. “A lot of times when something goes viral on Facebook, it’s more objective—it’s something you can easily rate true or false. A thing happened or it didn’t happen. This is almost more of an editorial truth.”

An example of this are Facebook posts, created by people who oppose the Black Lives Matter movement, that claim that police officers or police supporters were refused service, LaCapria said.

After a grand jury decided not to indict the officers involved in Eric Garner’s death in December 2014, a story went viral that eight New York Police Department officers had been refused service at a Chipotle. What actually happened was that an employee had made a defiant “hands up” gesture and the officers decided to leave on their own accord.

“They’re not even necessarily really hoaxes. But a lot of times somebody will be involved in an interaction that they didn’t like, and they spin it up in their head as being targeted for being a police officer or wearing a police shirt or something…I haven’t seen one where it was actually an absolutely true one” LaCapria said.

The Standing Rock post “is like an inversion of it,” she added. In this case, a claim that is probably false was made against the police “but it’s very rare to see that.” And most stories that go viral among people who support the Black Lives Matter movement are based on incidents of police violence that actually happened, she added.

Enzinna, the Mother Jones senior editor, said that while there is chatter about alleged tracking via Facebook check-ins among protesters on the ground, he’s heard no firsthand accounts of arrests because of such activity.

“This [Facebook] check in tactic has been going on for over a week and I haven’t met anyone who experienced it firsthand,” he told me.